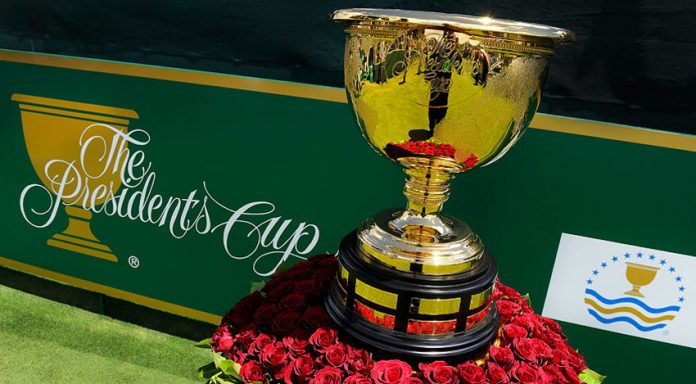 With just over four months until the President’s Cup, players need to put their games into a different gear if they want to make their respective teams.

One player that did just that was Si Woo Kim, recently winning the prestigious PLAYERS Championship. The 21-year old is now a lock to make the team, and International Captain Nick Price is very excited to have him on his squad, saying, “Congrats to Si Woo and can’t wait to have you on our team.”

Players will jostle for position in the next few months, as there are only a few locks to make each team. All other spots are up for grabs.

Ten players will make it in the standings and each captain will get to choose two captain’s picks to round out the teams in September.

Let’s take a look at how both teams are shaping up at the present time.

The USA Team has a lot of question marks. Dustin Johnson, Justin Thomas and Jordan Spieth are locks to make the team, but after that, the remaining six spots are up in the air. Rickie Fowler, Kevin Chappell and Kevin Kisner secure spots 4-6, but they really aren’t that far ahead of spots 6-10. You probably can pencil in the flashy Fowler, but the rest need to keep the pedal down in order to secure their spots in the standings.

Two players who are on the outside looking in are No.15 Matt Kuchar and No.16 Phil Mickelson. Even if they don’t make it into the top 10, both will get strong consideration as captain’s picks due to their success in past President’s Cup competitions.

There’s a long way to go and a lot can happen over the upcoming months. It will be exciting to see who moves in and who moves out in the standings.

The International Team is pretty much set with the top 10. The lack of depth is always a concern, but this group looks pretty deep from top to bottom, and it is probably one of the stronger teams they have had in the history of the event.

Jason Day, Hideki Matsuyama and Adam Scott are three of the world’s best, and they can matchup pretty well with whomever Team USA throws at them. Then you have the trio from South Africa: Louis Oosthuizen, Charl Schwartzel and Branden Grace. They are experienced and not afraid of international competition. After that is where the question marks come up. Si Woo Kim, Emiliano Grillo and Adam Hadwin are all great players, but they have never played in a President’s Cup or Ryder Cup.

The big decision for Captain Nick Price will come in September when he chooses his two captain’s picks. Right now spots 11-13 are occupied by Hideto Tanihara and Yuta Ikeda of Japan as well as South Korea’s Byeong Hun An. My guess is that An has the upper hand, and only one of the Japanese players will make the squad.

It’s all starting to shape up for both teams and the upcoming months will prove to be the deciding factor. Check back for President’s Cup odds as well as matchups at BookMaker.eu.