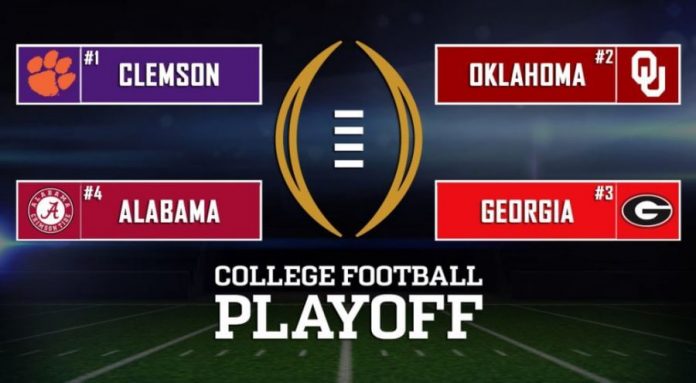 The Clemson Tigers, Oklahoma Sooners, Georgia Bulldogs and Alabama Crimson Tide are more than halfway through their preparation for the College Football Playoff, and most of the news out of all four camps has been relatively quiet. As a result, betting action has slowed down considerably, and the betting lines in these games have hardly budged.

Alabama remains favored by a field goal against Clemson in the Sugar Bowl while Georgia is set at -2 against Oklahoma.

It’s never too early to take a little bit of a look ahead to the prospective National Championship Games. There are four combinations of title games that are possible, and the odds in those games are expected to be just as close as the odds to win the two national semifinals.

With just a week between games, the Rose Bowl winner is going to have a bit of a tougher time here. The travel from Pasadena back to either Norman or Athens, then the subsequent trip to Atlanta will be tougher than Clemson or Alabama coming home from New Orleans, then getting to Atlanta. You might not think that a few hours of travel time make that much of a difference in this day and age, but even the top prognosticators have recognized that it’s at least a tremendous inconvenience, if nothing else.

Should the Sooners beat Georgia in the Rose Bowl, the projected spread in the National Championship Game is exactly the same. OU would be a 2.5-point underdog against the winner of the Sugar Bowl with a total listed at 62.5.

Of course, this is all fluid and will heavily depend upon how the teams look in the national semifinals. Should one team run it up against another as we saw with Clemson against Ohio State last year, the perception (thus, the game line) will change.

Still, these are expected to be the closest national semifinals ever. Over the course of the first four years of the playoff, we have had at least one game featuring a spread beyond a touchdown each year. This year, the two spreads combined are just five points, and it wouldn’t be totally out of the question for Clemson or Oklahoma to flip to becoming a favorite at some point before kickoff of their respective games.

Though these betting lines for the projected National Championship Games are all relatively close together, Alabama beating Georgia for all the marbles is the most likely scenario. The oddsmakers have released that exact combination of the three games happening at a price of +380. Oklahoma beating Clemson is the longest shot of the eight possibilities, but even that would only pay off at +800.