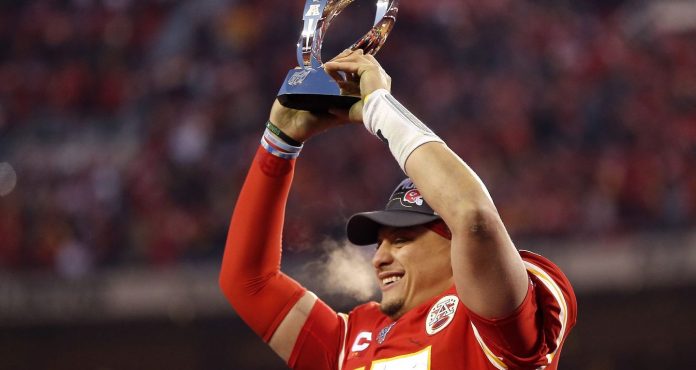 Who will be named Super Bowl LIV MVP?

Quarterbacks have been named the Super Bowl MVP in more than half of the Super Bowls contested to date. We’ve seen a quarterback win this award in 29 of the 53 games, and four times as many signal callers have won this event than any other position.

Mahomes has been sensational for each of the last two seasons. He won 41 of the 50 first-place votes to be named the league MVP in 2018, and he will likely pick up some MVP votes this season despite missing two games due to injury. Mahomes finished the year with over 4,000 yards despite missing those games, and he has been flawless in the playoffs. The third-year player from Texas Tech has completed 46 of 70 passes for 615 yards with eight touchdowns in the postseason, and he has led the Chiefs in rushing in both games. It’s hard to bet him at these odds though, as it would be much wiser to simply bet Kansas City moneyline.

Patrick Mahomes opens as the favorite to win #SuperBowl MVP at EVEN money at @SuperBookUSA.

Jimmy Garoppolo is the second favorite to be named MVP. Garoppolo is someone you likely want to avoid too though considering he threw just eight passes in the NFC Championship Game. Although he nearly surpassed 4,000 yards through the air in the regular season, Kyle Shanahan has taken the air out of the ball in the playoffs and will lean on a dominant run game. Jimmy G has thrown for just 208 yards with a touchdown and an interception in two postseason games.

There is some value in betting on Raheem Mostert to be named Super Bowl MVP. Mostert just set an NFC Championship Game rushing record by gashing Green Bay for 220 yards and four touchdowns, and he will have two weeks of rest before the Super Bowl. Tevin Coleman’s shoulder injury will lead to Mostert being the No. 1 running back, and it’s unlikely that Shanahan employs running back by committee in the Super Bowl since he has largely moved away from giving Matt Breida carries as the season has drawn on. Kansas City’s run defense was one of the worst in the NFL during the regular season, so the Chiefs are susceptible to be run on.

George Kittle hasn’t done much in the postseason with six receptions for 35 yards, but he will likely be Jimmy G’s favorite target in the Super Bowl. Kittle is the best all-around tight end in the game today, and his combination of run blocking and route running makes him tough to man up against. We have never seen a tight end when the MVP award, so Kittle could become a popular selection with a nice game in a 49ers’ victory, but 12-1 isn’t the best value. If you can get 15-1 or more on Kittle, then this becomes a solid bet.

If you’re looking to bet a longshot, take a gander at Mecole Hardman. The rookie from Georgia has serious speed, and he can potentially be named the Super Bowl MVP with a long return and a long reception on a pass play. Since Richard Sherman will likely be matched up on Tyreek Hill for most of the game, Hardman can exploit the other side of the field.

Check out the complete lists of Super Bowl LIV props.