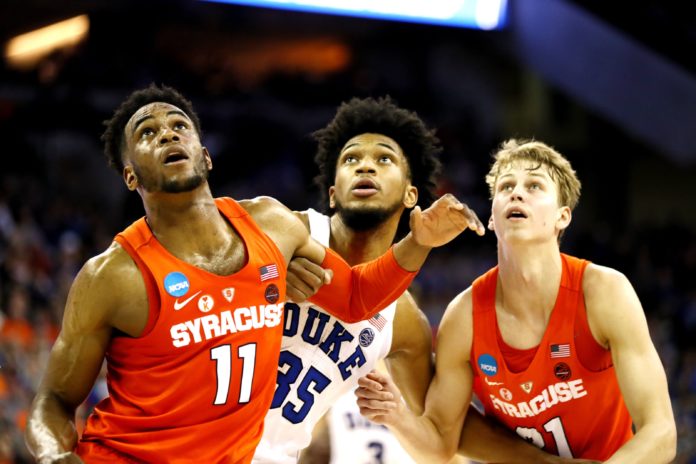 Just in case the Duke Blue Devils needed any added motivation for Monday’s ACC tilt with the Syracuse Orange they got it when Jim Boeheim went off on the decision of Duke freshman Jalen Johnson to opt out for the remainder of the season. After all doesn’t he have his own team to worry about? One team will see its three-game winning streak come to an end when the clubs get together. Duke is coming off its most satisfying win of the campaign taking down No. 7 Virginia on Saturday for its longest winning streak of the year.

This college basketball game will air live on ESPN at 7 p.m. ET on Monday, February 22, 2021 from Cameron Indoor Stadium in Durham, NC.

Syracuse may have a better record but that doesn’t mean they are the better team. The Orange won its third straight knocking off Notre Dame, 75-67, with an impressive second-half comeback. The Orange had their midweek game shelved due to COVID issues with the Louisville program and they were rusty out of the gate. However, they picked up the pace to get their second payout in three games. Ironically their last two wins were by the exact same score at home. Now, the Orange hit the road where they are 2-5 SU and ATS. Overall Cuse is 13-6 SU and 8-11 ATS.

Don’t write off the Blue Devils just yet. After a three-game losing skid put them below .500 for the first time they responded with a trio of wins thanks to an improved defense. Beating NC State and Wake Forest were by no means resume-builders, but they were wins and that’s exactly what the club needed. Looking like a more confident group, the Dookies survived Virginia 66-65 to stop a two-game slide at Cameron Indoor. Duke has won five of the last six meetings with Syracuse going 3-3 ATS. The only setback came at home two seasons ago when Duke was a 17-point favorite. Four of the last five meetings have cashed the OVER.

Credit Syracuse for beating teams they should beat. During their current streak the Orange knocked off NC State, Boston College and Notre Dame going 2-1 ATS while cashing the UNDER in all three contests. Those three teams have been ACC punching bags with each having a losing record in league play. Not to lessen the accomplishment, but those aren’t the best the ACC has. You can’t argue with Syracuse’s balance, though. All five starters average in double figures with Alan Griffin, Buddy Boeheim and Quincy Guerrier setting the pace with 15.2 points per game. Marek Dolezaj chips in 11.2 points and Joe Girard III adds 10.5.

There is a reason for those numbers. The elder Boeheim either doesn’t like or doesn’t trust his bench. Only one reserve, Kadary Richmond, plays more than 10 minutes per game and averages more than 4.0 points. It’s a great strategy as long as the starting five don’t get hurt or commit too many fouls during a game. Buddy Boeheim sparked a comeback from 20 points down against Notre Dame with a career-high 29 points on 6 of 10 three-point shooting. Pressing the Irish resulted in a 40-12 scoring run over the final 16:49 of the game.

With the possibility of missing the NCAA Tournament for the first time since 1995 on the table, the Blue Devils are at least making it interesting down the stretch. They lost six of eight games going 2-6 ATS before their current three-game winning streak. They allowed more than 90 points in each of the last two games of the slide forcing Coach K and his staff to emphasize defense during practice sessions. The move paid off with wins over in-state rivals NC State and Wake Forest with Duke allowing no more than 60 points in those games.

With Jalen Johnson opting out the lineup was going to take a hit. The projected lottery pick averaged 11.2 points and 6.2 rebounds in 13 games. His absence wasn’t a big deal in an 84-60 rout of Wake with Matt Hurt leading four players in double figures with 22 points and the team shooting 54 percent from the field. Duke beat Virginia 66-65 on Saturday by again locking down on defense. Over the last three games the Dookies allowed an average of just 59.3 points with Hurt scoring at least 22 points in every game.

With their backs against the wall the Blue Devils are playing good basketball. They rallied around each other after Johnson opted out and they look like a different team. They’ve always had the talent to score and couple that with a strong defensive game plan, I’ll take the home team to cover in this matchup.