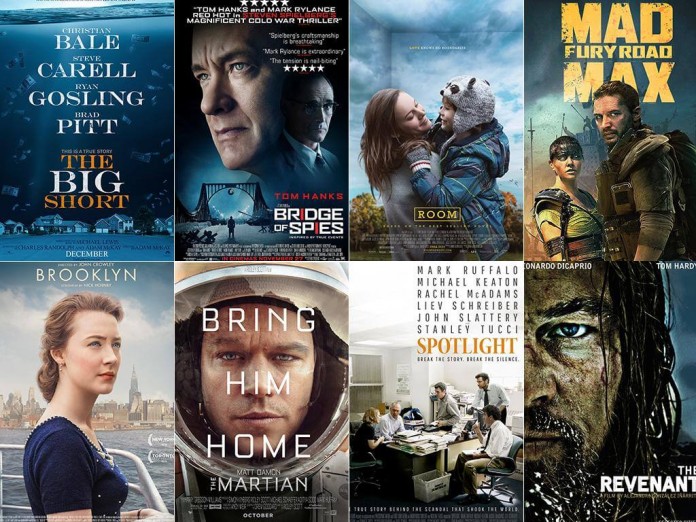 Other films nominated for Best Picture this year were “Mad Max: Fury Road”, “The Big Short”, “Brooklyn”, “Bridge of Spies”, “The Martian” and “Room”. But the oddsmakers at Bookmaker.eu are betting that “Spotlight,” a film about a Boston newspaper’s probe into the Catholic Church’s coverup of priests who preyed on children, will win the Oscar.

BEST ACTOR PREDICTIONS
Leonardo DiCaprio is the heavy favorite to win for Best Actor according to Bookmaker.eu. In addition to DiCaprio, the Best Actor nominees were Bryan Cranston as Hollywood screenwriter Dalton Trumbo, blacklisted during the ’50s Red Scare, in “Trumbo” (the first nomination for Cranston); Matt Damon as an astronaut stranded on the Red Planet in “The Martian”; Michael Fassbender as the founder of Apple in “Steve Jobs”; and Eddie Redmayne (last year’s winner for “The Theory of Everything”) as an artist who undergoes gender reassignment surgery in “The Danish Girl.”

Odds to Win Best Actor Award
LEONARDO DICAPRIO, THE REVENANT -2303
FIELD (ANY OTHER) +963

BEST ACTRESS PREDICTIONS
Brie Larson in “Room” is favored to win Best Actress for her portrayal as a kidnap victim raising her child in captivity, according to Bookmaker.eu. With Saoirse Ronan as an immigrant who finds romance on both sides of the Atlantic in “Brooklyn” as the next favorite to win the Oscar. Other nominees include for Best Actress are Cate Blanchett as a married woman who begins a lesbian affair in “Carol”; Jennifer Lawrence as an entrepreneur in “Joy”; and Charlotte Rampling as an elderly woman shaken by revelations from her husband’s past in “45 Years”.
Blanchett has won two Academy Awards (for “The Aviator” and “Blue Jasmine”), and has been nominated four other times. Lawrence won Best Actress for “Silver Linings Playbook,” and has two other nominations, while Ronan received a nomination for “Atonement.”
It’s a first nomination for Larson and Rampling.

BEST SUPPORTING ACTOR PREDICTIONS
Sylvester Stallone is favored to win for Best Supporting Actor, according to oddsmakers at Bookmaker.eu for his character in “Creed.” Mark Rylance as a Soviet agent in “Bridge of Spies is also a contender at 2 to 1 odds. Joining him are Christian Bale, as an investor who predicts the collapse of the housing market, in “The Big Short”; Tom Hardy as a trapper who leaves a fellow frontiersman to die in the wilderness in “The Revenant”; and Mark Ruffalo as an investigative reporter in “Spotlight”.
Bale won Best Supporting Actor for “The Fighter,” and was nominated for “American Hustle.” Ruffalo has two previous Best Supporting Actor nominations (for “The Kids Are All Right” and “Foxcatcher”). It’s the first nomination for Hardy and Rylance.

BEST SUPPORTING ACTRESS PREDICTIONS
According to Bookmaker, Rooney Mara as a young girl who has an affair with an older, married woman in “Carol”, is the favorite to win Best Supporting Actress. Followed by Alicia Vikander, as the wife of an artist who undergoes gender reassignment surgery, in “The Danish Girl”, and Kate Winslet as a marketing executive in “Steve Jobs.” Also nominated: Jennifer Jason Leigh as a killer being transported to the hangman in “The Hateful Eight, and Rachel McAdams as an investigative reporter in “Spotlight.”

BEST FOREIGN LANGUAGE FILM PREDICTIONS
“Son of Saul,” from Hungary, about a Jewish worker in Auschwitz, is a heavy favorite to win Best Foreign Language film. The nominations: French film “Mustang,” about orphaned sisters growing up in a Turkish village; “Embrace of the Serpent,” from Colombia, about scientists and tribesmen in the Amazonian rain forest; “Theeb,” from Jordan, about a young Bedouin boy; and the Danish film “A War,” about a soldier captured by the Taliban in Afghanistan.

For more award predictions and odds, check out our entertainment section.