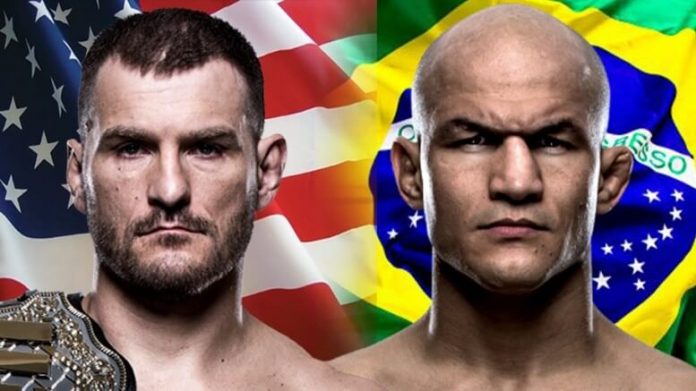 Is Stipe Miocic, UFC heavyweight champion and current Baddest Man on the Planet, ready to make history? Should he beat Junior Dos Santos in the main event of UFC 211 this Saturday, not only will he avenge his only loss since 2013, he’ll tie the UFC record for most heavyweight title defenses.

That’s right, no heavyweight champion in the promotion’s history has defended the belt three times. By now, we all know why: it’s nearly impossible to hang onto the strap in a weight class where every fighter can put out the lights. The question of whether a dominant champion will emerge is now the defining storyline for the heavyweight division.

Miocic seems like the type of big, athletic and well-rounded fighter that could become a dark horse great, but he’s got a tough fight ahead of him in a former champion. Let’s take a look at the UFC odds at BookMaker.eu and break down the fight from a betting perspective.

The opening odds in mid-February, with Dos Santos at +170 and Miocic at -200. About a week later, Dos Santos’ money line dropped to +150, with Mioicic’s going up to -171. This indicates that the early action was on Dos Santos, a compelling underdog.

The over/under for this five-round title fight is 1.5 rounds, which is the lowest possible total. However, the over is the more expensive play at -190, with the under at +181.

The Case For Dos Santos

His stellar takedown defense will play a big role in this matchup. Widely known as one of the best boxers at heavyweight, JDS is excellent at keeping fights on the feet. He is a good athlete with quick reflexes, making him a natural sprawler. And on the few occasions he does get taken down, springy hips make it hard to keep him on the mat.

While Miocic is a good wrestler, he’s no Cain Velasquez. He cannot apply the relentless pressure that Cain used to grind Dos Santos down – trying to do so would likely sap the champ of valuable energy quickly.

It’s highly likely that this fight plays out on the feet, with both men testing their boxing skills against each other. This is where Dos Santos is most comfortable, and it’s probably the main reason why he’s been a popular underdog pick at BookMaker.eu. There are only a handful of heavyweights that can hang with the former champ in a striking match.

The Case for Miocic

Like Dos Santos, Miocic is a fine athlete – something that is evident in his background. A former D-1 wrestler, Golden Gloves champion and MLB prospect, the 6’4” Miocic was born for sport. He moves well for a 245-pounder, showing great agility and good explosiveness for a big man.

It’s clear that the champion is arguably the most well-rounded heavyweight in the UFC, but it’s how he applies his skills that make him special. Against a K-1 champion striker in Mark Hunt, Miocic mixed in takedowns to make the fight easy. When facing a glass-chinned Arlovski, Miocic upped the pressure until he was able to land the knockout blow. Against the slower Roy Nelson, Miocic used his speed to batter Big Country from the periphery.

If Dos Santos has a weakness, Miocic will test it. And right now, the champ has to be fully aware that JDS has looked less and less capable of getting into grueling slugfests. Constant pressure and heavy clinchfighting will likely be used to drain Dos Santos’ stamina meter.

There are two decent options here. The first is more a product of the line movement. In February, Dos Santos at +170 would have been a fantastic underdog play considering the type of fight this will be. But Miocic is now more affordable at -140, and he has all the momentum going into the matchup.

The other bet is the over on 1.5 rounds at -190. This is somewhat risky considering that this is the heavyweight division we’re talking about, but the last time these two met neither was able to really gain an advantage over the other.