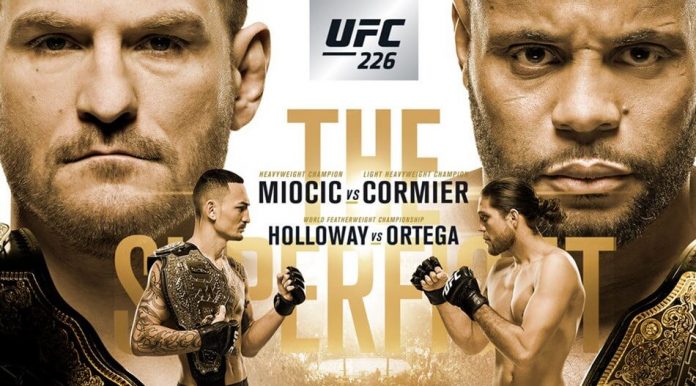 Get ready for a second round of fireworks – this time inside the octagon. Every year, the UFC always manages to put on an explosive event during 4th of July weekend, and this Saturday’s UFC 226 in Vegas carries on the awesome tradition.

Headlining the night is a champion vs. champion superfight pitting Stipe Miocic against Daniel Cormier. There’s so much more than Miocic’s heavyweight belt at stake: the Clevelander could further cement his legacy as the greatest big man in UFC history, while Cormier could become an instant legend if he walks away holding two titles.

In the co-main event, featherweight champion Max Holloway defends his title against Brian Ortega – a grappling wolverine who has torn apart every opponent set in front of him. This scrap has got Fight of the Year potential written all over it, as Holloway is a relentless tornado of Hawaiian badassery who pours it on until his opponents wilt. “Blessed” is also putting a 12-fight win streak on the line against a 14-0 fighter.

The heavyweight feature between Francis Ngannou and Derrick Lewis is not the fight to take a bathroom break. These are the two most prolific knockout artists in a division filled with them, and they’re both on a mission to prove who the better crusher is. Physically, they could not look more different: Ngannou looks like a chiseled Greek god while Lewis looks like a hefty bouncer at your local bar, yet they both pile up knockouts with ease.

There are a lot of bets to consider here, so let’s jump right into the UFC odds at BookMaker.eu and break down your betting options. Cherry Picks are your safe chalk plays, Savvy Risks are solid underdog bets, and Lottery Tickets are your high-risk, high-reward options.

DC’s handled his fair share of good heavyweights, like Josh Barnett, Frank Mir and a prime Bigfoot Silva, but none of those guys had the combination of athleticism and well-rounded skills that Miocic possesses. However, the light heavyweight champ is one of the smartest fighters in the business, which is clearly evident when he’s ringside calling the play-by-play. If anyone can break down the heavyweight champ with technique, it’s the King of the Grind himself.

Unfortunately, it’s hard to see an area where DC has an advantage. Miocic is a former Golden Gloves champion whose been piling up knockouts against the heavyweight elite. In addition to having the big advantage in punching power, the Miocic will also have a significant height and reach advantage over the 5’11” light heavyweight champ. It’s also doubtful that Cormier will be able to take down a much bigger fighter who is also a former D-1 wrestler as well.

This is a relatively safe bet, and also a decent parlay booster as well. I think fans are still sleeping on how good Miocic really is.

This is definitely a dicier proposition, but Cormier’s chin is ridiculous and he’s an expert at changing levels and locking up to gut his way out of bad situations. While it’s going to be tough to get through five rounds with Miocic, just remember that Francis Ngannou was able to do so while fighting with zero gas tank for four rounds.

Oddsmakers are giving Holloway the proper respect here, making him a significant favorite against the less experienced Ortega. But man is it easy to get caught up in T-City’s hype. He’s finished all seven of his UFC fights, most recently becoming the first man to stop legendary tough guy Frankie Edgar. Ortega’s jiu-jitsu is every bit as violent and dangerous as a killshot punch, and he’s starting to develop knockout power in his strikes as well.

But can he handle the dynamic offense of Holloway? The 26-year old is one of the handful of fighters with weaponized cardio – beating dudes down with a non-stop assault of footwork and fists. When he gets hit, he only seems to get angry, and he’s got that Hawaiian warrior spirit to go toe-to-toe with anybody. He’ll have to avoid going to the ground against a mat wizard like Ortega, but should have a marked advantage in the striking ranges.

Holloway has never been finished and Ortega has never lost. Though the round total takes you into the championship rounds, both guys have the toughness and the defense to get there. Ortega’s jiu-jitsu gives this bet some risk, but Holloway is savvy enough to stay away.

This is the play if you think that Ortega pulls of the upset. It’s highly unlikely that he outpoints a volume striker like Holloway, and if he can make a BJJ black belts like Cub Swanson and Renato Moicano tap like amateurs he can do the same to Holloway.

Lewis proposed some rule modifications for this fight on the ‘Gram: 1 minute rounds, 10 minute breaks, and points deducted for any takedown attempts. While hilarious, we see where the guy is coming from. Both “The Black Beast” and Predator have serious cardio issues, have gotten dominated by wrestlers and really just love to bang.

If fights were won based on the eyeball test, Ngannou would be the champion of the universe. He looks like an action figure and has explosive speed and power. But his cardio got exposed by Stipe Miocic, and Lewis is a guy that made a name for himself with miracle comebacks from the brink. We’ve seen multiple occasions where The Black Beast was visibly hurt, only to have him lay out his opponent with a fight-ending bomb. Ngannou’s punches are on a different level, though – nobody could survive that uppercut he landed on Overeem.

Lottery Ticket: Lewis inside the distance at +424

We don’t fully trust Ngannou just yet. While his run up to his heavyweight title bid was breathtaking, he hasn’t gone through that much adversity. Lewis is a guy with a ton of heart that doesn’t go away easily. At this price we love The Black Beast.

Well, duh. These two guys are too focused on rendering the other unconscious to expect any other outcome. This is a parlay anchor.

Lottery Ticket: Pettis inside the distance (+450) over Michael Chiesa

This is a matchup that favors Chiesa, as Pettis has historically struggled against strong wrestlers. But back when he was a lightweight champ, “Showtime” has a submission game that was just as flashy as his high-flying offense. If you’re looking for a hail mary play with a high payout, this isn’t a horrible bet.

Saki both impressed and disappointed in his UFC debut. His electric striking ability as one of the top kickboxers of his generation shined, but he also got clipped and gassed early. Still, he got the first-round knockout and put his ridiculous speed, footwork and explosive striking on display. Rountree is a guy that throws single shots at 100%, at times getting wild and reckless. Basically, that’s the exact opposite of how you want to fight a technical kickboxer like Saki.

Costa is an undefeated killer with 10 KOs in 11 career victories. Hall is an inconsistent middleweight on a 1-3 slide. While this matchup seems to favor Costa by a mile, it’s also exactly the type of matchup where Hall might bust out one of his crazy highlight reel KOs. Costa’s aggression (8.28 significant strikes landed per minute) could play right into Hall’s crazy athletic counters. Remember Gegard Mousasi?

So Perry might not be the next welterweight contender like we all thought, but the dude is still one of the hardest hitters in the division. In many ways, Medeiros is the perfect opponent for him. The Hawaiian is a guy that gets by on toughness and grit, and he doesn’t have the advanced technique to pick Perry apart. Fortitude only gets you so far against a guy with nuclear power in his fists. Perry to win straight up is too expensive for our tastes, so go with the better value.