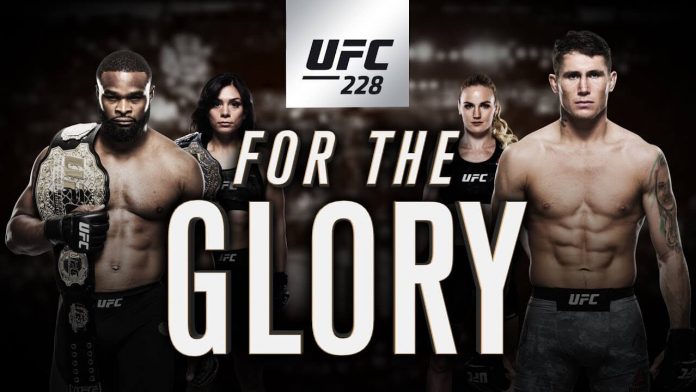 Darren Till outlined his grand UFC title plans for the next couple of years to reporters this week, but he better worry about winning Saturday’s fight before thinking too far ahead. Till will face off against Tyron Woodley in the headlining fight at UFC 228. The UFC Welterweight Championship will be on the line when the pair faces off.

It is only one several intriguing bouts at this event. There is also a UFC women’s flyweight championship bout between Nicco Montano and Valentina Shevchenko. There are five main card fights on the docket as well as nine preliminary card matchups so there will be plenty of action throughout the night.

Till is the slightest of favorites as he is listed at -122 to emerge victorious while Woodley is listed at -111, so this one is a coin flip for all intents and purposes. Till is getting more than 60 percent of the action as the betting public is on board with his ability to claim the title.

Till is 17-0-1 with a 59 percent knockout percentage so it is easy to see why the up-and-comer has good odds to win the belt. Woodley is 18-3-1 but does not have the same punchout power.

Shevchenko is a big favorite in her bout, coming in at -1487 to take care of business and claim the flyweight belt despite being the challenger. Montano is the +759 underdog, and not surprisingly is getting the majority of the action at those odds. Shevchenko is 15-3 in her career with seven wins by submission. Montano is 4-2 in her career and won the inaugural flyweight title but is a heavy underdog to keep it.

Carla Esparza and Tatiana Suarez are facing off on the preliminary card in a strawweight belt but they can still be wagered on. Suarez is the -538 favorite while Esparza is the +377 underdog. Once again, the longer odds are getting the higher percentage of the action.

There are several other bouts from UFC 228 that can be wagered on. Bantamweight Cody Stamann is a +100 underdog in his bout against -129 favorite Aljamain Sterling; middleweight Charles Byrd is a -217 favorite to knock off +173 underdog Darren Stewart; bantamweight John Dodson is a +122 underdog while Jimmie Rivera is the -152 favorite in their matchup; welterweight Diego Sanchez is the +180 underdog in his bout against Craig White, the -230 favorite; and lightweight Alex White is the -151 favorite against Jim Miller, the +121 underdog.

Woodley vs Till – Who To Bet On

There are a bunch of intriguing bouts at UFC 228, but the one everyone will be watching is the headliner. Till is off to a great start in his career but is facing one of the toughest foes of his career. Woodley is the champion and won’t go down easily. The two fighters have similar measurables so neither has an easily-seen advantage. However, Till is the more talented mixed martial artist and should be able to land enough big punches to take control and come away with the win.

Till wants to move up weight classes and accumulate more championship belts in the future. He will accomplish a big one here by claiming the welterweight title over Woodley.