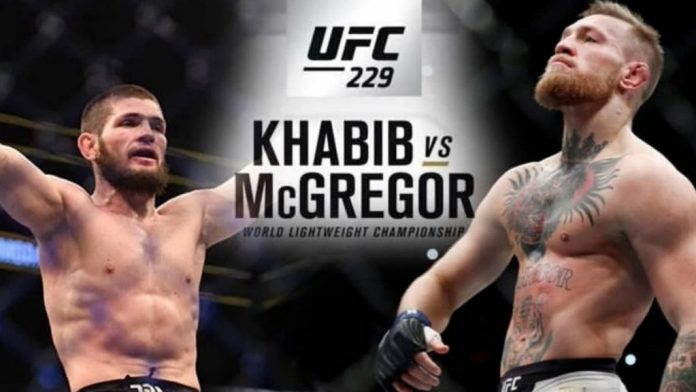 We’re less than a week away from the biggest UFC fight of all time. Conor McGregor challenging lightweight champion Khabib Nurmagomedov is the rare superfight that makes perfect sense, and the context is something that happens just once a generation.

There’s no need to hype this fight any more. If you’re here, you obviously know what’s up and what’s at stake. Money lines on each fighter have been out for months now, but a contest this big is bound to come with tons of prop bets you wouldn’t normally find when any other fighter not named Conor McGregor is fighting.

You might see some wacky prop bets that the Mayweather-Mcgregor boxing match brought out. That’s when you could bet on stuff like whether Bieber would wear a hat during the walkout. In case you were wondering, the over/under on Demi Lovato’s rendition of the national anthem was 1:54. If there’s money to be made, oddsmakers are gonna put bets out there.

Just last week, we saw some really entertaining lines for the Nurmagomedov-McGregor press conference. You could bet on whether either of them would throw something, if Conor would be chewing gum, if he’d wear sunglasses, even if he’d take a shot of Proper Twelve whiskey. If you bet that he’d down some of his new drink, you cashed in on a +150 payout.

But for now, we’ve got some more familiar bets to show you. You can find most of these in the UFC odds at BookMaker.eu, but we’ve also pulled from other top-rated online sportsbooks.

Round Totals, Round Props

How Will Each Fighter Win?

Who Wins in What Round?

How To Bet the Fight:

There hasn’t been much movement in either McGregor or Nurmagomedov’s lines to win straight up, but that often changes as most of the action comes in the night before and the day of. Normally, McGregor fans drive his price up, but the Russian just might be scary enough keep the blindly loyal casual bettors away. If that doesn’t happen, we’d leap all over a Nurmagomedov price that’s -130 or lower.

It’s just a personal preference, but we’d stay away from round betting – it’s like taking shots in the dark. The round totals is a different story: 2.5 splits the title fight down the middle, and it’s nearly a pick’em. That should give you an idea of just how unpredictable this fight is, especially since McGregor is so explosive with his left hand.

If you were going to bet on Mystic Mac, we strongly recommend that you either take him inside the distance or by TKO. The payout is much better than his straight-up win price, and it’s highly unlikely that the Irishman wins a gritty decision against MMA’s best wrestler. If he wins, it’s going to come via knockout, so you should bet accordingly.

Conversely, we like the prices on both Nurmagomedov by TKO and Nurmagomedov by submission. McGregor’s weakness is on the ground, and his only losses have come by way of submission. It must also be noted that Conor has always dealt with patches of fatigue, and his stamina bar will drain quickly if Khabib is pounding away on top of him. If he’s exhausted, Nurmagomedov will finish him.

Remember, the lines for any of these plays can shift in the next few days, so it’s always a good idea to lock in your bets early. We’ll get even deeper into the picks next week, so stay tuned for our analysis and official picks.

Check out the latest UFC 229 betting odds for today.