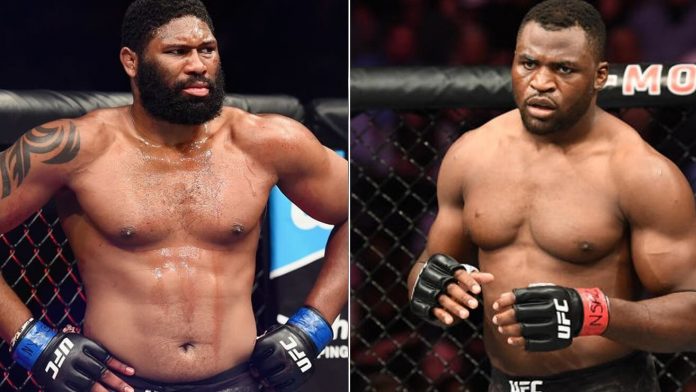 Hello, Beijing. The UFC is headed to China this Saturday for a Fight Pass card that, from top to bottom, just as good as some of the weak stuff we’ve been getting on FS1.

In the main event, surging heavyweight contender will try and lock up a title shot and avenge his only UFC loss when he meets Francis Ngannou. They first met in 2016, with Ngannou busting up “Razor’s” eye was badly that the doctor called off the fight between rounds.

A lot has changed since then. Ngannou went on a knockout tear that had him looking like the UFC’s own version of Mike Tyson, then got tenderized by Stipe Miocic for five rounds in a title fight. Even worse, the beating gave him a case of the yips: Ngannou was largely responsible for putting on the worst fight in heavyweight history in his encore, setting a record for the least amount of strikes thrown in a fight.

Blaydes took the L and went to work, merging his elite wrestling and developing boxing skills into a dangerous, well-rounded skillset. He’s no longer just an athletic prospect – Blaydes is a legit title contender that nobody really wants a part of right now. The best part about it all is that he’s just 27, which is super young for the division.

Let’s take a look at the UFC odds at BookMaker.eu for some of the best fights of the night. If you don’t know, BookMaker is one of the premier online sportsbooks that pays out real cash money, and it’s not some shady site either. Trust. Now onto the best picks.

The big question here is whether Ngannou can get his mind right after admitting to buying into his own hype. Dana White publicly took him to task for the Lewis fight, which is kinda dumb when you consider that White was the one doing most of the hyping. All of this sets up a fascinating storyline, since it’s not like Ngannou’s elite physical skills are gonna fall off a cliff at 31.

Ngannou needs some of that swagger back – the same self-confidence that carried him to an expected win over Blaydes two years ago. In that scrap, Ngannou completely shut down the takedown attempts and pieced up the American with relative ease. While Blaydes is a much improved fighter since then, Ngannou still has the tools to beat him in the same way.

But if you’re looking for a “get right” fight, Blaydes just isn’t the one. He can wrestle, he can thump, and he’s smart enough to attack opponents where they’re weakest. Case in point: he took down and pounded on world-class strikers Alistair Overeem and Mark Hunt, and got cracking against a submission specialist in Aleksei Olenik.

Over the course of five rounds, we’ll take Blaydes’ fight IQ and well-rounded skillset over Ngannou’s explosive athleticism. There’s definitely some risk with a puncher as dangerous as Francis, but Blaydes has never been knocked out in 11 pro fights.