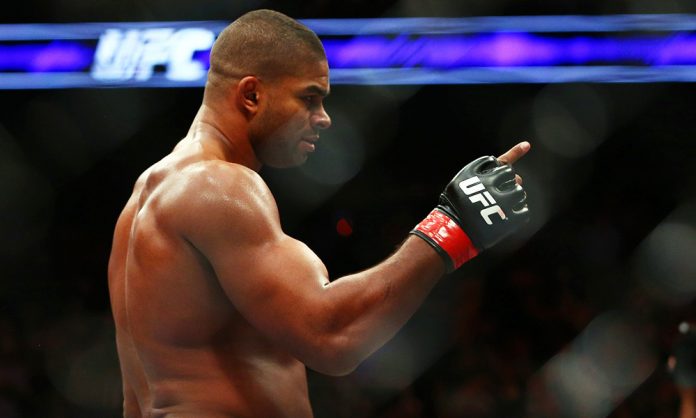 Alistair Overeem might be ranked No. 6 at heavyweight, but he’s a long ways from title contention. It’s strange to see The Reem – who was headlining pay-per-views just a few years ago – toiling away on a Fight Pass card in China. This Saturday, the future Hall of Famer welcomes Russian knockout artist Sergey Pavlovich to the UFC.

Right now Overeem seems like one of those broken-chinned big men whose career is teetering on the brink of a severe downward spiral. There are plenty of respectable names that pretty much dropped off a cliff when their chins went, but it’s the circle of MMA life – especially when it comes to heavyweights.

In this case, losing to a no-name UFC rookie could send The Demolition Man plummeting out of the top 10. Conversely, Pavlovich has a chance to immediately jump into the top 10 in his first UFC fight. All Overeem gets if he wins is that he stays relevant and keeps fighting killers who will further break his body down. The rewards balance is pretty lopsided here.

Let’s check in with the UFC odds at BookMaker.eu for the best betting values. Remember, live UFC betting is also available if you want to hedge any of your bets.

Can Overeem Protect His Chin?

A former Strikeforce, Dream and K-1 Kickboxing champion, Overeem’s is a surefire Hall of Famer. In terms of pure skill, he could run circles around Pavlovich. But when you’ve got a chin as brittle as uncooked spaghetti, that kind of nullifies everything. Plus, it’s like his chin is connected everything else – Overeem gets clocked and his balance goes, along with his cardio. When’s the last time you’ve seen him recover from a huge shot? It only takes one clean hit to change the course of the fight.

Right now, anyone with big knockout power poses a serious threat. Pavlovich is just that: the former FNG champ is 12-0 with 9 KOs. This isn’t some small dude that’s been feasting on subpar competition either. Pavlovich is a 6’3”, lean at 238 pounds and a solid athlete whose surprisingly quick with his countershots.

On top of that, his background is Greco Roman wrestling. That’s one of the better foundational MMA skills, arming it’s combatants with great balance, good takedown defense and a plethora of tricks from the body lock position. So if this ever gets hairy for the Russian, he can lock up and stall while planning out his next move.

This is a gut call, but we see some value in Overeem’s price. He’s developed a style that’s based around protecting his head, and Pavlovich has been benefiting against subpar competition overseas. We should also note that any time the Russian’s faced other solid prospects, it’s gone to decision.

Eight of Overeem’s last 10 fights have ended before the final bell, but he’s got the skills to make the normally conservative Pavlovich even more gunshy. Pavlovich has never been knocked out and is still relatively young in his career – that body should be able to take whatever punishment Overeem dishes out.