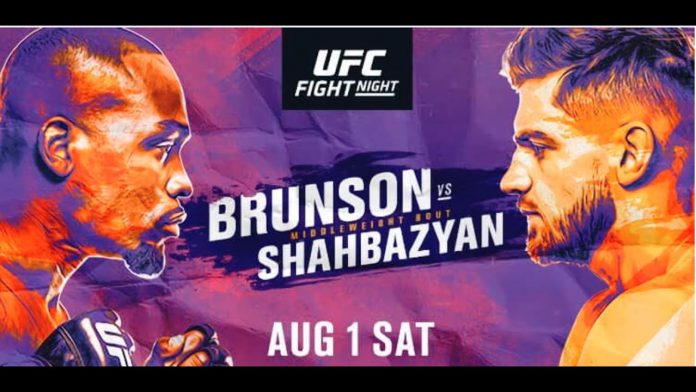 After a busy week at Fight Island, the UFC heads back home this Saturday to the UFC Apex. Headlining the UFC’s return to the states is an undefeated blue chip prospect managed by none other than Ronda Rousey.

We’re talking about Edmen Shahbazyan, an undefeated 22-year old whose been training at the Glendale Fighting Academy since he was 12 years old. As a teenager, “The Golden Boy” was a training partner to Rousey. This is a kid that grew up training MMA with UFC fighters – and he just so happens to be an explosive athlete.

Now, we get to see if Shahbazyan is ready to hang with the big boys when he meets Derek Brunson. We can’t think of a better litmus test for the prospect: Brunson is a vet that’s shared the cage with fighters like Yoel Romero, Robert Whittaker, Anderson Silva, Jacare Souza and Israel Adesanya. He is an excellent wrestler with knockout power, and can test the young Shahbazyan in several different ways.

It’s a huge step up for Shahbazyan. Although he’s 11-0 with 10 finishes, there was some grumbling that his record was built against fighters with losing records. Still, it was impossible to not get excited about a kid that was finishing pro fighters so easily. But it was his early KO win Brad Tavares – a toughass Hawaiian – that really turned some heads. There is no denying that Shahbazyan is the most exciting prospect since a young Israel Adesanya was tearing through the ranks.

Despite Brunson’s edge in experience, the UFC odds at BookMaker.eu opened with Shahbazyan as a huge -263 favorite. Brunson opened at +204 on the comeback. Let’s break down the matchup and go over your best betting options.

Honestly, this is a solid value on a guy that has all the tools to really stifle a young fun like Shahbazyan. Yes, we’re well aware of the fact that Brunson has lost to every middleweight contender he’s fought. But just the fact that he’s hung around the top 15 for so long and fought so many key dudes is a testament to the fact that he’s pretty damn good.

What we like about Brunson is his willingness to use his wrestling. While his takedown accuracy is low, he will commit to it as a strategy if he’s outgunned on the feet. We saw that against Adesanya. We’ve also seen him patiently bide his time on the feet before launching a one-hitter quitter punch – he laid out Lyoto Machida and Daniel Kelly like this.

We love Shahbazyan and think he has a bright future, but we just like the price on Brunson more. This is a case where Shahbazyan has a higher ceiling than his opponent, but is in danger of falling to a savvier opponent. A small bet makes sense.

Yes, we’re going with another high-risk pick here. Shahbazyan has only been to a decision once, so the sense here is that he’ll force a finish (or be finished) somehow. But if we lean on our earlier logic, we can see a scenario where Brunson uses veteran tactics to prolong this fight. If Brunson can force Shahbazyan to start second-guessing himself, there’s a very good chance that this one goes deep.