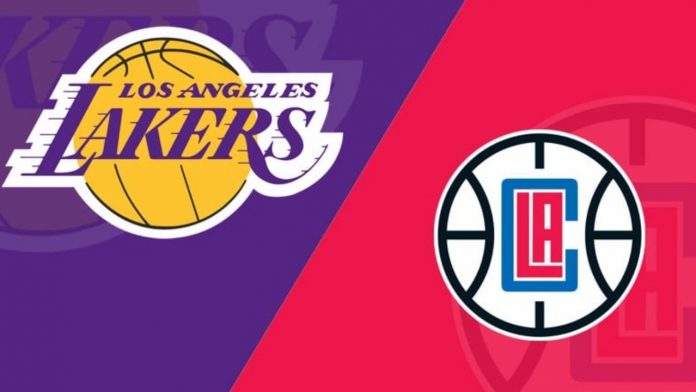 The basketball teams representing the city of Los Angeles pick up right where they left off on Thursday night when the NBA restart begins inside the Florida bubble. When we last saw the Los Angeles Lakers and Los Angeles Clippers they were battling for the top spot in the Western Conference with the team in Forum Blue and gold holding a 5.5-game lead. Four months later the NBA looks to complete the season and start the playoffs.

A lot has changed since the teams last took the court for an official game. The coronavirus pandemic altered how all sports will operate moving forward and the sterile environment with no spectators will certainly impact NBA betting at online sportsbooks. Just like the players have to adjust to their new normal so do bettors. There will be a feeling out process with this normally energized rivalry being more subdued. But don’t underestimate the competitiveness of the players on the floor.

Zion Williamson has arrived at Pelicans practice with his team

The NBA season resumes for both clubs on Thursday, July 30, 2020, from the ESPN Wide World of Sports Complex in Kissimmee, FL. The game will air live on TNT at 9 p.m. ET. BookMaker.eu will have betting options for every game on the NBA schedule.

The four-month break is nearly as long as an entire offseason during a normal year. You could say the teams are starting a new season following the interruption. In a sense they are only without free agency, the draft and a full training camp. Teams will look different with players opting out and injuries to deal with. The betting approach is going to be fairly conservative at the outset. And since we only have playoff or near playoff eligible teams competing, the spreads won’t be outrageous. Nope, the New York Knicks aren’t here for teams to beat up on.

The Lakers opened as a 4.5-point favorite at BookMaker.eu, the biggest spread in any game between the clubs this season. Oddsmakers also expect players to be rusty with the total of 216 well below the number in any of the three earlier meetings.

If the layoff helped any team it has to be the Clippers. Doc Rivers doesn’t have to worry about Kawhi Leonard and Paul George taking turns in the trainer’s room and sitting on the bench in street clothes since the season is now a sprint and not a marathon. Those two combined to average 48 points per game and are obviously the key to any success.

There is a chance the Clips can overtake the Lakers in the West, but they’ll probably have to win every game. Teams will play eight seeding games to determine the playoff setup and since the Clips are 5.5-games off the pace there is ground to make up. And this is the only game between the clubs. Instead of going balls out to try and catch the Lakers, it might be smarter to stay ahead of the teams below them in the standings. But does it really matter since there is no home court advantage?

The Clips are going to be shorthanded with key reserves Montrezl Harrell and Lou Williams not available for the opener. Those two led the NBA’s most potent bench and their absence will be noticeable.

Just like the Clippers the Lakers rely on their duo to do most of the damage. And just like the Clips the Lakers have a deep bench. However, the Lakers are healthy and their roster is intact heading into the opener, which has me leaning toward LeBron’s group. There is concern for Anthony Davis and a vision problem resulting from an eye injury. The team said he might not be able to play on Thursday, but anything short of ruling him out means he’s going to play.

That’s good for the Lakers, who rose to the top of the West on the strength of LeBron and AD. The two combined to average 52.4 points per game accounting for almost 46 percent of the team’s scoring pre-shutdown. James leads the NBA with 10.6 assists per game while AD averages 9.4 boards and 2.4 blocks per outing.

The most notable player to opt out of the NBA bubble was probably Avery Bradley, considering the Lakers are a favorite to win the O’Brien Trophy. They’ll also be without Rajon Rondo for a few games. But the Lakers bulked up before and during the hiatus adding Dion Waiters and J.R. Smith to the bench.

While the Lakers might be without AD the Clippers will be without Harrell, Williams and possibly Patrick Beverly. That’s a lot of points, tenacity and defense they won’t be able to overcome against a full Lakers roster. The teams didn’t score a lot of points in the earlier meetings and I don’t think that’s going to change following a lengthy layoff giving plenty of value to the UNDER.