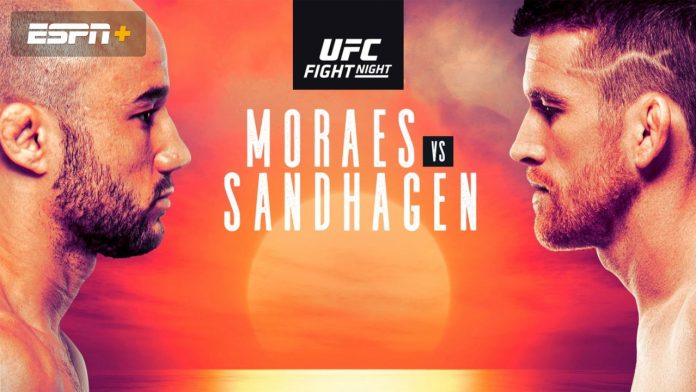 We’ve got a new bantamweight champion in Petyr Yan. We’ve got his first title defense against Aljamain Sterling. Now it’s time we figured out who the winner of that matchup faces.

Which brings us to this Saturday’s headlining matchup between No. 1 Marlon Moraes and No. 4 Cory Sandhagen. Considering their rankings and recent accomplishments, it’s pretty much a guarantee that this scrap is a title eliminator. They’d have to put on an all-time stinker for Dana White to disqualify them, and that’s not gonna happen – both guys are too badass for this fight to be boring.

Expect fast and furious action! Moraes & Sandhagen are back this weekend ⚡️

In Moraes, you’ve got a killer that’s authored multiple Fight of the Year finishes. After losing a split decision in his UFC debut, Moraes decisioned the well-regarded John Dodson, then nearly decapitated Sterling with a killer knee. After that he needed just 30 seconds to ice Jimmie Rivera, then got revenge on Assuncao with a guillotine finish.

That eye-opening run led to a title fight with Henry Cejudo, and Moraes was putting in some serious work early. Though he ended up losing that matchup, for a round it looked like Moraes was gonna blast through a two-weight champion. His Muay Thai is that good, and his power is that scary.

If Moraes is a killshot sniper, Sandhagen is a death by a thousand cuts. The 28-year old is a former WKO kickboxing champ who has been nothing but a beast since transitioning to MMA. Training with a top camp in Elevation Fight Team, Sandhagen is a main training partner of former champ TJ Dillashaw. It should be no surprise that he’s developed a style based on movement and volume. The difference is that Sandhagen is huge for the division and hits much, much harder.

The UFC odds at BookMaker.eu opened with Sandhagen as a -169 favorite, with Moraes at +141 on the comeback. Let’s dive deeper into the betting lines, fight stats and matchup to get to your best picks at the online sportsbook. 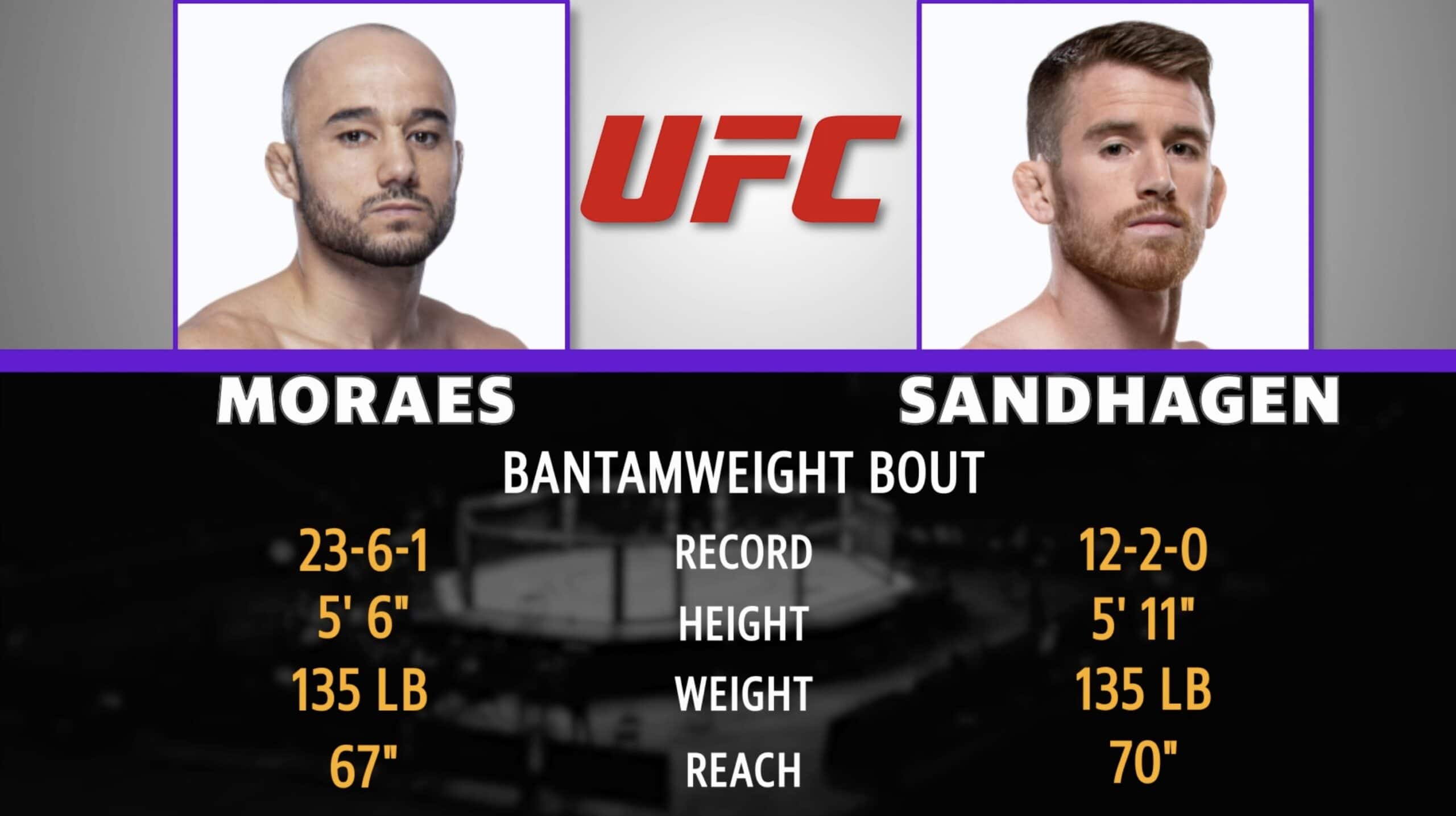 Sandhagen’s price is affordable and the matchup is right. It’s no secret that Moraes has serious cardio issues – exploiting his gas tank is part of any smart gameplan to beat him. It doesn’t take much research to figure out that Sandhagen is clearly the better conditioned guy. For starters, we haven’t seen him really slow down in his fight. He also trains at elevation in Colorado alongside dudes that just don’t get tired. In six UFC appearances, he’s averaged nearly seven significant strikes landed per minute – which is an insane rate.

Moraes’ power is the great neutralizer here, but Sandhagen has never been knocked out. The longer this fight goes, the more it tilts in Sandhagen’s favor. He’s bigger, younger, more aggressive and better conditioned – it’s an easy nod in our books.

Here’s a fun stat: in 30 professional fights, Moraes has only been outside of the third round once. Only one of his last five fights have gone to decision. Given his cardio, we’re just not sure he’s built to last five rounds. Betting that the fight doesn’t go to decision is a decent choice here, and also takes his knockout power into consideration.

There are too many different plausible outcomes to try and predict who will win the fight and how. Stay away from the victory bets here.

Additionally, it’s too difficult to pick an over/under on rounds. Sandhagen is all over the place – two of his last four fights ended in the first and the other two ended by decision. Before that? Two round 2 finishes. The same with Moraes: his last two fights went deep into the final frame, while the previous three ended in the first. Neither the over or under betting lines are enticing enough for us to warrant a bet.