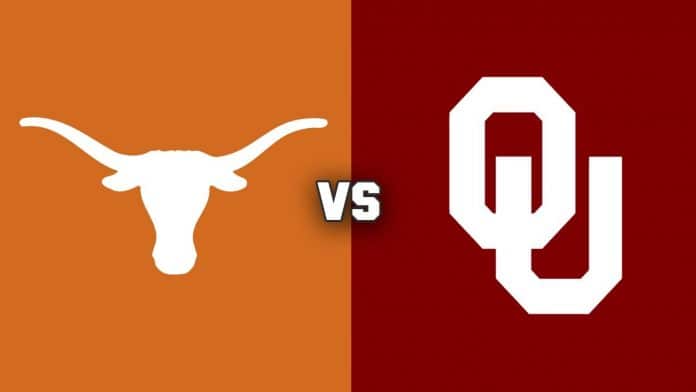 What were thought to be the two best teams in the Big 12 at the start of the season are trying to stay ahead of Kansas in the conference standings. One team will end a losing streak this week when the Texas Longhorns and Oklahoma Sooners square off in the Red River Showdown. As always, the game takes place at historic Cotton Bowl stadium in Dallas, which might be the closest either of these teams gets to a bowl this season. Both are coming off losses to unranked opponents with OU suffering its second straight setback to fall from the national rankings. Texas is hanging on at No. 22 and for the first time since 1999 neither team ranks among the top-20 entering the contest. The Sooners have won two straight and four of the last five meetings between the schools and they are a 2.5-point favorite on the college football betting line.

The game between the Texas Longhorns and Oklahoma Sooners will take place at the Cotton Bowl in Dallas, Texas at 12 p.m. ET on Saturday, October 10, 2020, and will be televised on FOX. Unless something drastic happens before kickoff this will be the first time since 2012 that the spread is below a touchdown. What hasn’t changed is that Oklahoma is laying points. The Sooners closed as favorites in each of the last 11 series games going 8-3 SU and 4-7 ATS. OU priced itself out of the market with so many years of success laying four touchdowns to K-State a few weeks ago and 7.5-points last week. The Sooners lost both outright so maybe they aren’t as good as the public believes. They are 1-2 SU and ATS with their only cover win against FCS Missouri State.

There are a number of programs that get the benefit of the doubt when it comes to rankings and point spreads. Notre Dame fits the bill and so does Texas. Under Tom Herman the Horns haven’t met the lofty expectations, a continuation from the Charlie Strong era. This year started out well enough with a romp over UTEP and the Horns salvaged their tilt with Texas Tech. They couldn’t get past TCU last week losing their sixth game to an unranked foe when Texas played as a top-25 team in the Herman era. They failed to cover the spread the last two games and are 1-2 ATS. Both teams can score and they also have holes on defense, giving value to the total of 72.

Talk about scoring, no team has done as much of it as the Longhorns. Behind a FBS-best 14 touchdown throws from Sam Ehlinger, Texas averages 51 points and nearly 518 yards per game. The offense bailed Texas out of its game with Texas Tech scoring 15 points in the final three minutes to forge a tie before winning in overtime. The Horns totaled 476 yards in that game with Ehlinger tossing five TDs, including the game-winner.

We know the Horns can score but can they do enough defensively to stay in games? Take out the 59-3 romp over UTEP and the Horns showed cracks against stiffer competition. None of which rival what the Sooners can do. Tech had 331 pass yards and 441 total scoring 56 points. TCU totaled 458 yards with 227 on the ground in a 33-31 win. Self inflicted errors have played a role as well. The Horns were flagged 22 times for 192 yards in the last two games.

The Sooners aren’t used to losing so their response to a two-game skid is something to watch closely. What’s more disturbing is how they lost. OU blew a three-touchdown lead late in the third quarter giving up the final 24 points in a 38-35 loss to Kansas State. The Sooners were a 27.5-point favorite. They led Iowa State by 11-points in the first quarter and were up by a touchdown halfway through the fourth until another late meltdown cost them. Thanks to a shutout of FCS Missouri State in the opener the season numbers are skewed. In two Big 12 matchups OU gave up 817 yards and 75 points.

The offensive numbers haven’t been as high as previous years, but the Sooners can move and score the football. They’ve scored at least 30 points in every game and average 37.7. Spencer Rattler leads the nation’s second-best passing attack throwing for 977 yards and 10 touchdowns while completing over 73 percent of his throws. Whichever teams has the ball last will likely decide the outcome.

The last two games in the series had a closing total of at least 77 with the teams cashing the under both times. This year is a different story. Both teams have struggled to stop opposing offenses that aren’t as strong as what they’ll face on Saturday. This will be a shootout and I have to back OU with its success in the series and the more disciplined game.