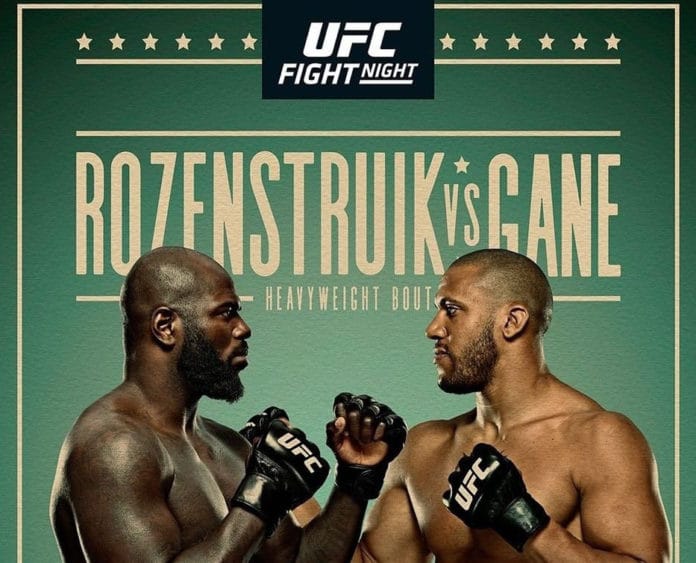 Anyone interested in seeing two giant men throw hands at each other this Saturday? Of course you are, or you wouldn’t be here reading this. We got No. 3 heavyweight and bonafide killshot hitter Jairzinho Rozenstruik back in action, and the Suriname native will be looking to hold off undefeated prospect Ciryl Gane, who could vault into title contention with a win.

Here’s what’s fun about this matchup: Rozenstruik is pretty much a knockout-or-nothing dude – 11 pro fights, 10 wins, 9 by knockout, 8 of which came within two rounds. As long as he’s conscious, there’s a chance he goes nuclear and ends the night.

Exhibit A: Against world-class kickboxer Alistair Overeem, Rozenstruik got battered for five rounds. Then, with less than 10 second left in the fight, “Bigi Boi” goes ham and does this:

Ciryl Gane is an even bigger, more impressive physical specimen. He’s 6’5”, 250 pounds and shredded. On top of that, he’s an excellent athlete with a good gas tank. Basically, he’s exactly what most kids would come up with to create the perfect heavyweight if they were playing the UFC game’s Create a Fighter mode. Oh yeah, he trains alongside No. 1 contender Francis Ngannou. He has yet to lose inside the octagon, and is coming off a TKO win over former champion Junior Dos Santos. “Bon Gamin” is surging.

The UFC might be rushing the Frenchman, but it’s not like heavyweight is a deep division to begin with. Bigi Boi himself rode a string of big knockouts into a title eliminator against Francis Ngannou, and now it’s time to see if Ngannou can take the express train to title contention.

Did I mention that in 19 combined fights, these dudes have gone to decision just twice? Expect some serious hurt here, folks.

Despite Gane’s lower ranking, he opened as a sizable -285 favorite, with Rozenstruik at +218 on the comeback. Let’s take a look at the UFC odds at BookMaker.eu and break down all your best betting picks.

It’s not a cheap bet, but it’s the right one. While there’s alway the risk betting against a one-hitter quitter like Rozenstruik, Gane doesn’t have a cracked chin like Overeem or Arlovski. Plus, as one a former aspiring pro kickboxer, Gane is the more refined striker. Bigi Boi had a ton of trouble against Overeem’s technique, and will likely experience the same against Gane.

Not only is Gane the more skilled fighter, he’s also bigger, faster and a more experienced martial artist if you count the years he trained in kickboxing. Don’t overthink this and take the safe bet.

Forget It: Over/under or fight goes to decision

Both these guys’ fights tend to end early, but that doesn’t necessarily mean that’ll be the case here. Rozenstruik proved that he could survive against a better striker in Overeem, and Gane is too good defensively to get trucked over quickly. Given that this is five rounds, we wouldn’t be surprised if this went several rounds due to the respect that they’ll show each other’s power.

The money line you get on the fight going to decision might be tempting, but don’t get too cute. Both these guys are notable finishers – they should find a way to end things early.

Bet It: Gane inside the distance +100

Rozenstruik has only been finished once, when Ngannou nearly decapitated him. He’s obviously a tough dude, but his defense ain’t so hot – Bigi Boi absorbs more than three strikes per minute, and has just a 32% striking defense. Gane land over 3.5 strikes per minute with 68% accuracy. Over five rounds, he should be able to do enough damage to stop Rozenstruik.

While everybody’s zigging for the knockout, you might wanna zag for the submission. Gane is a a sneaky good grappler with just as many submission victories as knockouts. Rozenstruik has never been submitted, but that’s because nobody’s really tried to roll with him. We’re pretty sure that he’s super green in that area, as he’s relatively new to MMA and relies almost entirely on punching power. There’s a solid chance that Gane puts him on his butt and nabs a quick sub while Rozenstruik is trying to recover. A small bet could net a nice payout.