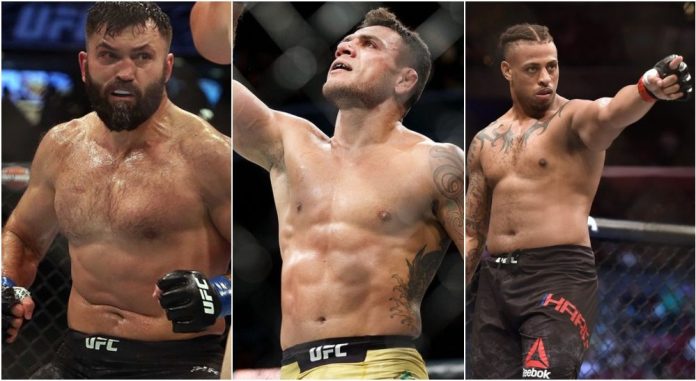 It’s time to see if Leon Edwards is a title contender. This Saturday, the No. 11 welterweight will meet Rafael Dos Anjos in the main event of UFC on ESPN 4 in San Antonio. Ranked No. 3 at 170 pounds, Dos Anjos has cemented himself as the person to beat to get consideration for a title shot.

Case in point: Dos Anjos’ last two losses came against Kamaru Usman and Colby Covington. Usman went on to beat Tyron Woodley to claim the strap, and Covington is looking like his first title defense.

Currently riding an 8-fight winning streak, the No. 11 Edwards could vault into the top 5 with a win over the No. 3 RDA. At the very least, he’d be one or two wins away from a title challenge. Of course, we can’t forget that Dos Anjos represents one of the toughest challenges in a loaded weight class.

The rest of the card should be a lot of fun, with three heavyweight fights featuring guys like Aleksei Oleinik and former NFL All-Pro Greg Hardy. A lightweight scrap between James Vick and Dan Hooker could be one of the most violent outings of the year. All in all, this is shaping up to be a card featuring a lot of men hitting the canvas – perfect for the Just Bleed types of fans out there.

Let’s take a look at the UFC odds at the online sportsbook and get to your best betting options. Live UFC betting at BookMaker.eu lets you bet between rounds as needed – don’t be afraid to hedge your bets! Can Edwards Keep Up?

The UFC thought it was getting an explosive power puncher in Edwards. Instead, he’s evolved into a wrestler who grinds out victories from the top position. In essence, he’s sacrificed watchability for wins, and you can’t really fault him for it.

The good news for Edwards is that he’s got the right style to beat Dos Anjos – smothering wrestlers have done very well against the Brazilian recently. The bad news is that you’ve got to be an elite all-around fighter to do it for 25 minutes. Kevin Lee found this out the hard way when his early success was completely demolished after he gassed. Plus, it’s not like Dos Anjos is an easy guy to bully either – he might be a former lightweight but he’s a skilled grappler with endless cardio.

Is Edwards on the same level as Covington and Usman? We highly doubt it – those dudes have been wrestling their entire lives and come from top level collegiate programs. The fact that this is a 25-minute main event also factors against him here too. That’s just too much time for RDA to find his rhythm and pull ahead with his much more advanced striking.

Aleksei Oleinik is one of the most dangerous submission artists that the heavyweight division has, but that only gets you so far in a division filled with knockout artists. If the Russian had the wrestling to overpower guys we might be looking at a future champ. But because he’s a small-ish heavyweight that has to rely on finding openings or pulling guard he’ll have to settle somewhere in the mid-to-upper tier of the division.

Our pick: Harris to win by knockout

All 12 of Harris’ career wins have come by way of knockout. Oleinik has been knocked out in half of his 12 career losses. Harris forces him to stay on the feet and at some point scores a nuclear finish.

Not the time to get a snack

The UFC is matching Hardy up with a clone of himself: Adams is a massive heavyweight with tremendous athleticism and knockout power. Both guys win by swarming their opponents, swinging for the fences and hoping something connects. Obviously the best bet here is that the fight doesn’t go to decision – but that’s too expensive to be anything more than a parlay booster.

This is one of those fights where it’s best to sit back, eat some nachos and see how things play out. It should be wild, sloppy and violent – but a ton of fun. In a coin flip match like this one, we usually just tell you to go for the underdog as you’ll have a 50-50 shot of coming out on top. Let’s just hope that Adams doesn’t freeze up like a deer in headlights – Hardy’s last opponent did and it was hard to watch.

Our pick: Adams to win at

Adams last fight against Arjan Bhullar showed that he could be patient and get through a three-round fight. We’ve seen nothing of the sort from Hardy.

Fight of the Night Right Here

While the main event should be a lot of fun, this lightweight scrap should be the most entertaining. Both Vick and Hooker consistently get down and dirty, and more often than not leave the mat far bloodier than it was before the bell rings. Vick recently had a surge derailed by a two-fight losing streak, while Hooker nearly had a liver removed by Edson Barboza.

Vick’s 6’3” stature makes him an interesting problem at 155 pounds, but Hooker’s aggression could mitigate the height difference between them. It’ll be interesting to see how things play out in the clinch, as Vick’s long frame could mean a healthy dose of punishing knees to Hooker’s gut.

Another toss-up fight here, but we think Vick keeps things at a safe enough distance where he can play the long-range sniping game and win on points. Getting an underdog line on him is a bonus.

Interested in betting on UFC? Check out the latest fight odds here.