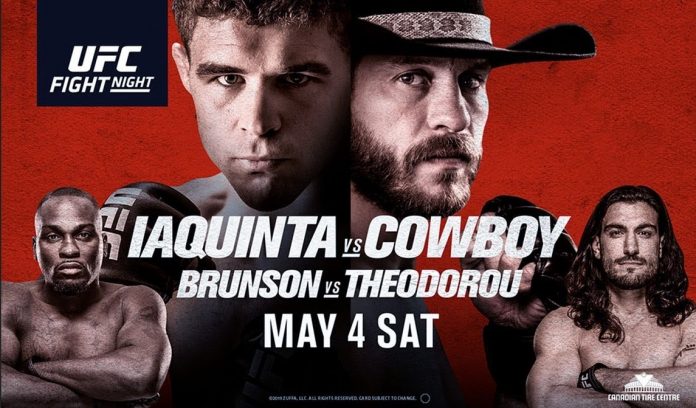 There are a lot of different paths a fighter can take in becoming a UFC star. Take this Saturday’s headliners: Donald “Cowboy” Cerrone is the ultimate company man, an “anyone, anywhere, anytime” type whose stepped in short notice on countless occasions to boost a card. Al Iaquinta got famous for cussing out booing fans and trashing Dana White at every opportunity.

The one thing that every road to being a headliner has in common? You’ve got to be good. And these dudes are very, very good. On top of that, they’re a ton of fun to watch. Iaquinta is coming off a shocking upset win over Kevin Lee just one fight after going five rounds with Khabib Nurmagomedov. Cerrone has scored two straight finishes coming into the tilt, most recently crushing the hype of the previously-undefeated Alexander Hernandez.

Winner inches closer to the top of a crowded weight class that has two champions right now. A title fight might not be in the immediate future, but there are always big fights for big names at 155 pounds. It’s absolutely a worthy headliner that could’ve been a co-main for a pay-per-view.

The two other fights to watch at UFC on ESPN+ 9 is a middleweight bout between Derek Brunson and Elias Thedorou, and a featherweight banger featuring Cub Swanson and Shane Burgos. Let’s take a look at the UFC odds at BookMaker.eu and break down your best betting options.

Which Skills Pay the Bills?

Both guys are well-rounded fighters that can strike and wrestle, but they’re very different in each phase. Cowboy is a dynamic kickboxer with flashy kick-punch combinations, Iaquinta is a technical boxer who relies on a piston jab. Cowboy’s grappling relies on timing and slick submissions, while Iaquinta is a former collegiate wrestler.

We expect most of this fight to take place on the feet, as it’s doubtful that either can impose their wrestling on the other. Cowboy has the bigger arsenal of strikes stemming from his Muay Thai background, but Iaquinta might have more “meat” to his traditional boxing. The thing with Cerrone is that he can be knocked off his game, and when things go downhill for him, the fight tends to fall apart quickly. That might be a problem against Iaquinta, who should a ton of resolve against Lee by coming back to win the last three rounds.

The most relevant recent matchup we look to is Cowboy’s TKO loss to Jorge Masvidal. In that fight, Cowboy found success in the first round, but was quickly dismantled by Jorge’s jab. Of course, Masvidal is one of the smoothest strikers in the game, but we can also say that Al’s boxing is greatly underappreciated. In a five-rounder, we really like Iaquinta to hang tough and separate himself late in the fight – especially at this affordable price.

Is Theodorou More Than Great Hair?

It seems like we’ve been waiting for the well-coiffed Canadian to level up forever. He’s been good, but never turned into the contender that many people were expecting. Every time he’s racked up a winning streak, he’s gotten turned back by an upper-tier middleweight. Now the Gaston-lookalike is back in the same situation – does he finally break through against the well-respected Brunson?

Brunson enters on a two-fight slide, but those losses came against Israel Adesanya and Jacare Souza – just sharing the octagon with them says a lot. He’s finally developed a style that best utilizes his explosive striking and excellent wrestling, and Jackson-Wink has curbed his out of control brawling. Against Theodorou, we expect Brunson to patiently bide his time and wait for the opportunity to launch a cruise missile to the dome.

The problem with that is that Theodorou is actually a decent long-range kicker and a very good close quarters grinder. Part of the reason that he hasn’t gained much traction with fans is that his wins come ugly, relying on a brutal clinch and top control. Brunson might have to dig deep here.

Brunson is a former collegiate wrestler, so we know the man can grind. Additionally, he’s one of the better athletes at 185 pounds, and we expect him to tag Theodorou with a few blazing punches. At this price, Brunson is an easy pick.

Brunson has been KO’d five times in his career, but Theodorou isn’t a killshot striker. In fact, the Canadian’s last seven fights have gone to decision – and he’s never been stopped. This pick ain’t cheap, but it’s safe.

Dark horse Fight of the Night here. Cub is one of the most reliable action fighters at featherweight, a dude whose made a living in the trenches of back-and-forth battles (see his fight with Doo Ho Choi). Still, he’s 35 years old and has a ton of miles on his body. He’s not done by any means, but his run as a top featherweight is likely over.

Burgos is a pressure fighter who lands 6.54 significant strikes a minute – more than champion Max Holloway. Plus, he throws every punch with 100% power. That kind of pressure is super fun to watch, but it also leaves him open to getting tagged a lot. It’ll be fun watching him try to bang on Swanson, who has some of the dramatic head and body movement in the division.

This is a case of the old guard trying to fend off a young, hungry fighter. Swanson’s got a huge bag of tricks, but is that enough to take the win over a swarmer in his physical prime?

We like Cub as the ‘dog. Swanson’s biggest weakness is his wrestling defense, and he’s not going to have to worry about that here. If Burgos comes charging out of the gates, Swanson’s experience should eventually give him the upper hand.

Check out the latest UFC fight odds as of today.