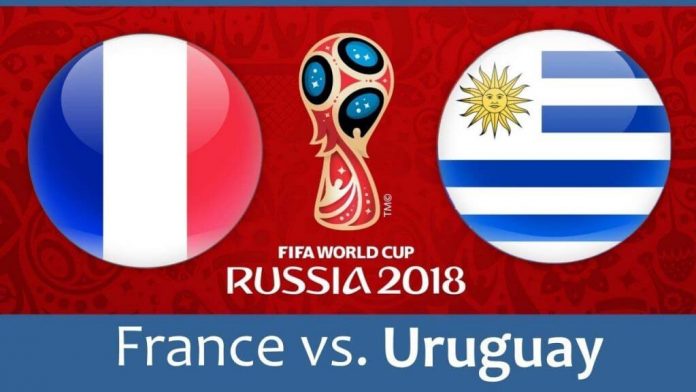 France exploded last time out in a win over Argentina, and now the team has advanced to the quarterfinals of the World Cup. The next game might be a more defensive battle against a solid Uruguay foe. France hasn’t won the World Cup since 1998 and didn’t look great in Group Stage action but hopes to turn it on and claim the title.

France has some bright young stars who have gotten acclimated to the World Cup and will now look to lead the team to victory. Uruguay advanced to the quarterfinals by knocking off Portugal and Cristiano Ronaldo in the knockout stage and should have the requisite confidence to make this a competitive matchup.

France will enter as the favorite but this World Cup has been full of surprises and Uruguay would love to pull the upset and inch close to the World Cup title.

The Uruguay-France World Cup quarterfinal match will be held at Spartak Stadium in Moscow, Russia. The match will take place on Friday, July 6th, 2018, at 9 a.m. ET.

France enters this matchup as the -103 favorite on the moneyline, while Uruguay is being wagered on at +366 to pull the upset. The odds of a draw are listed at +216. The betting public is split on this matchup as Uruguay is getting 51 percent of the action and France 49 percent.

France got here with a 4-3 win over Argentina in the knockout stage. France took an early 1-0 lead on a goal by Antoine Griezmann but Argentina came right back with a pair of goals to take a 2-1 lead. France turned it up from there, as Kylian Mbappe had a pair of goals and Benjamin Pavard added another for a 4-2 lead. Argentina cut the deficit to one goal in stoppage time but it was too little, too late.

The Uruguay match wasn’t as high-scoring but it was also dramatic. Edinson Cavani did all the damage for Uruguay, scoring in the seventh minute and then, after Portugal tied it up on a goal by Pepe early in the second half, finding the back of the net again a few minutes later.

Mbappe is Player To Watch

The young French sensation has taken the World Cup by storm. He is only 19 years old and became the first teenager since Pele to score multiple goals in a knockout stage contest. Mbappe looks to have an extremely bright future and has not been intimidated by the big stage.

Uruguay has a much better defense than Argentina and it will need to keep an eye on Mbappe at all times. If he can find the back of the net again it will be a huge boost to France’s chances. On the flip-side, Cavani is having a tremendous World Cup but he is dealing with a calf injury and there are reports that he won’t be available for the contest. If that is true, it’s a big blow to Uruguay.

This is an intriguing matchup between a pair of solid teams. France is the deserved favorite but this tournament has been full of high-profile upsets, and the choice is for another one to happen here. Uruguay has some really nice odds and is the choice to come away with the win.

Take the “over” as both teams are going to get on the scoreboard in this one.

Our Betting Pick: Bet the OVER