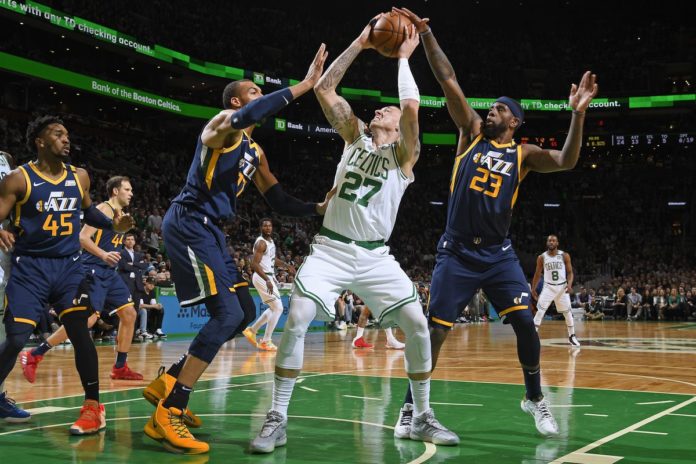 The Utah Jazz were so good for such a long stretch of time that you knew it had to end. Thanks to a run that saw them win 20 of 21 games, the Jazz own the best record in the NBA. However, they are just 4-5 in their last nine games as they continue a five-game road trip Tuesday against the Boston Celtics. It’s been a roller coaster year for the Celtics, who saw their four-game winning streak end at Brooklyn last week.

Tuesday’s game will air live on TNT with tip off at 7:30 p.m. ET from TD Garden in Boston.

I don’t think there’s a question about whether or not the Jazz are a good team. The real question is just how good are they? They had a rather lackluster start to the season with a 112-100 loss at New York in early January dropping them to 4-4. They went on an absolute rampage after that winning their next 11 games while going 11-0 ATS. That streak was interrupted by Denver before another nine-game heater where they went 8-1 ATS. The Jazz have cooled considerably losing Sunday for the third time in four games. They are just 4-5 SU and 3-6 ATS in their last nine outings while failing to cover the closing line in their last four games. Donovan Mitchell scored 36 points in Utah’s 122-108 payout win over the Celtics on Feb. 9.

Not only are the Celtics looking to avenge that earlier setback in Utah they are trying to get things moving in the right direction. They hadn’t won more than two games in a row since mid-January until a four-game streak to close the first half. They opened the second half with a disappointing showing against Brooklyn but walloped Houston on Sunday for their fifth win in six games going 3-3 ATS. While the overall record is spotty at 20-18, the Celtics have been beating up opponents at the Garden recently. All four wins in their recent streak took place on the parquet floor and the Cs have won five in a row overall with the OVER 4-1 in their last five home contests.

The Jazz became the last team to reach double digit losses falling 131-119 to Golden State on Sunday. Despite the 12-point setback the Jazz have the NBA’s largest point differential by a wide margin at +8.4 points. The next closest team in the West is Phoenix at +6.0. That tells you the Jazz did a lot of damage during their run of 20 wins in 21 games. And we don’t always envision the Jazz as a high-scoring team, but they lead the West and rank third overall averaging 116.6 points thanks to a barrage of three-pointers.

Utah leads the NBA averaging 17 made triples per game on a league high 42.8 attempts. They trail only the Clippers and Nets knocking down nearly 40 percent of their shots from behind the arc. They have sacrificed some defense for the glory of the triple allowing the OVER to cash in five of their last six games. Mitchell leads six players averaging in double figures with 24.8 points per game.

A nice run of five wins in six games has the Celtics feeling pretty good heading into their matchup with the best team in the NBA. Boston rebounded from a 121-109 loss to Brooklyn in its first post break tilt to hammer the hapless Rockets 134-107 on Sunday, handing Houston its 16th straight loss. It was a game the Celtics were expected to win as a 10.5-point road favorite, and they delivered. Getting Marcus Smart back in the lineup for the Brooklyn game was a big deal. The Celtics didn’t win, but having a full roster of players should help moving forward.

Making his first appearance after missing the previous 19 games, Smart scored 19 points in 21 minutes. Smart had only five points against the Rockets, but Brad Stevens was cautious with his minutes in a blowout victory. Instead, the usual suspects did most of the damage with Jaylen Brown (24), Jayson Tatum (23) and Kembe Walker (16) combining for 63 points. As a team the Celtics shot 55.4 percent from the field and hit 18 of 37 triples.

Our staff’s Best Bet: Celtics and the OVER

The Celtics could be getting stronger at the right time. They dealt with plenty of adversity during the first half of the season with injuries, COVID protocols and postponed games doing a number on them. The roster got stronger with Smart’s return and they’ve won five of six games ahead of the home encounter with the Jazz. And you know Boston is thinking about that beat down in Utah a few weeks ago. That’s why I’m leaning toward the home team for the cover in this matchup.