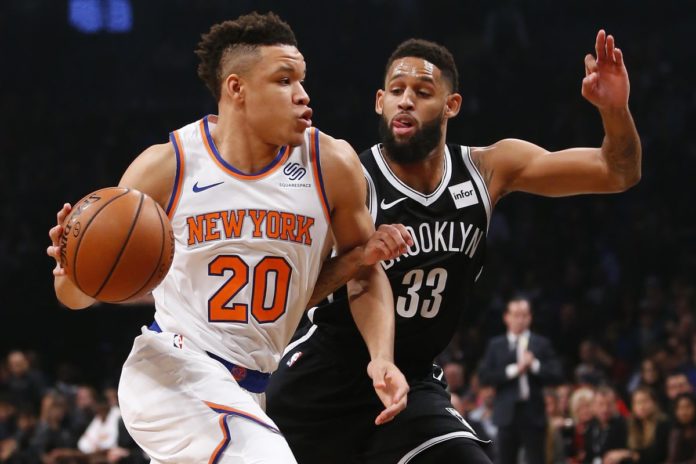 The Brooklyn Nets returned from the All-Star Break Thursday night beating their division rival Boston Celtics 121-109 to win for the 12th time in 13 attempts. They’ve covered the spread all but two times during that stretch. Steve Nash’s team will be looking for another big win on Monday night when they welcome the improved New York Knicks to the Barclays Center for the second meeting of the season.

Brooklyn has taken six of the last four meetings, but it’s the Knicks that won where it mattered in covering all but three of those matchups. The Nets might be one of the favorites to win it all this season, but the Knicks have been one of the best cover teams in the league. Something will have to give.

This NBA Atlantic skirmish is set to go down live on Monday, March 15, 2021. Tip-off is set for 8 p.m. ET from the Barclays Center. The game will be broadcast live on ESPN.

When these rivals met in January, Brooklyn easily won with a 116-109 final score. But the seven point spread is far from indicative of what actually occurred. While both teams shot 48 percent from the field overall, it was the Nets 3-point shooting that ultimately put it over the top. Kevin Durant went for a team-high 26 points and connected on 3 of 5 long range attempts to do his part in helping Brooklyn rack up a 40 percent success rate from downtown.

The result was unexpected considering the Knicks enter the rematch owning the league’s No. 1 ranked 3-point defense that’s only allowed a 33.4 percent conversion rate. Though Kevin Durant won’t be made available for this one, Brooklyn still has plenty of excelled shooters. If New York plays to its seasonal output this time around, it’ll be in a solid position to compete and/or win the game as easy it was for Julius Randle to dominate with 30 points scored in his 40+ minutes of court time.

The Knicks were not ready when they returned to the hardwood to oppose Giannis Antetokounmpo and the Bucks on Thursday night. Milwaukee came out firing erupting for 68 first half points en route to cruising to the 134-101 win and cover as 11-point favorites.

It was another one of those rare nights for New York’s 3-point defense after it allowed 18 converted shots with Bryn Forbes and D.J. Augustin draining all 10 of their combined attempts. Randle was held to single digits in scoring for the first time this season, but R.J. Barrett went for 20+ points for the fourth time in his last five games. The loss dropped New York to 8-12 SU and 10-10 ATS on the road.

The Nets and Celtics seemed evenly matched for 41 of the games 48 total minutes. The teams exchanged decent sized leads throughout, but Brooklyn seized the game midway through the fourth quarter when it outscored its division rivals 21-14 to secure the 121-109 win and cover as short 2.5-point favorites. Kyrie Irving led the way with a game-high 40 points on 15 of 23 shooting, and it was his pair of converted 3-balls late that allowed for the Nets to run away and hide. James Harden came a pair of assists away from logging another triple-double, while the offense also got solid contributions from Landry Shamet, Jeff Green and Joe Harris. The win bumped the team’s home record up to 14-6 SU (straight up) and 11-9 ATS (against the spread).

The top ranked scoring defense against the highest scoring team in the league should be fun. However, I’m not convinced the Knicks are up to the challenge of hanging with Brooklyn. This game has a little extra meaning with the teams housed just a few miles from each other and both making waves in the East. Harden is just on another planet and even the New Yorkers won’t be able to slow him or his teammates.