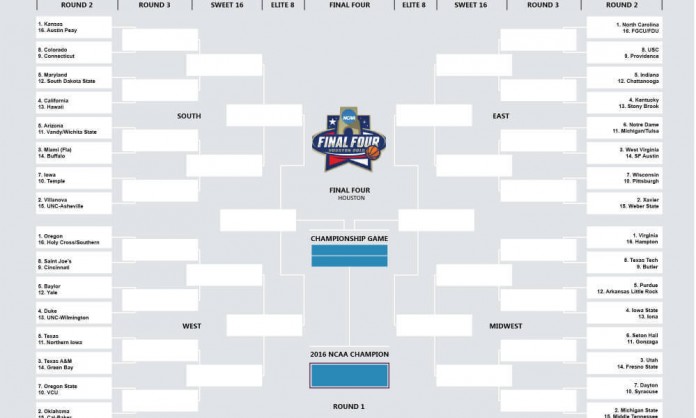 The field of 68 has been set, and fans are already flocking to fill out the 2016 NCAA March Madness brackets. For betting enthusiasts though, the prospects of striking it big and find that right team to win the NCAA Tournament from the outset can field a tremendous price. We saw Connecticut win the title two years ago while with 150 to 1 odds at the outset. Will you be the next to select such a scintillating winner?

Get Your Free Printable NCAA Bracket

Before making any predictions let’s make sure you’re well prepared. You can access the downloadable copy of the March Madness bracket here.

There really were no truly dominant teams in college basketball this year. Kansas, Oregon, Virginia and North Carolina combined for 23 losses, three more than any group of 1-seeds ever had in the history of this tournament. That said, it shouldn’t be surprising that there are three co-favorites to win the whole enchilada in the Jayhawks, Tar Heels and poorly placed Michigan State Spartans at 5 to 1.

To help you get started, here the odds for each team in the 2016 NCAA Tournament.

Note: odds are based on BookMaker.eu‘s predictions.

So Who Are The Bracket Favorites?

Clearly, Kansas, Oregon, Virginia and North Carolina are going to be the favorites to win their brackets this year. That said, all three teams have flaws and potential roadblocks ahead.

Kansas might be the only team to win 30 games in the nation, but it also doesn’t have any NBA talent. The Jayhawks are destined to see some of it when they play against either Cal or Maryland in the Sweet 16, while Miami probably has the best guard play in the South and could be waiting for the Jayhawks.

Michigan State might have another date with Virginia coming up in the Elite Eight, but the Spartans could have some issues first if they run into the giant Jakob Poeltl and the Runnin’ Utes of Utah in the Sweet 16. Forget about the fact that Seton Hall, the other possible Sweet 16 foe for Sparty, might be the most intriguing team in tournament after finally getting it all together and winning the Big East.

What About the West?

The West though, is a far different story, as there isn’t a clear choice to come out of the bracket. Few trust Oregon as a No. 1 seed out of the seemingly overrated Pac-12. Oklahoma might have the best player in the tournament in Buddy Hield, but it’s highly unlikely that he can win this bracket all by himself. This is a jump shooting team and nothing more, and it only takes one day of cold play to see the Sooners go home. Texas A&M was an overstated 3-seed, while Duke and Baylor are both incredibly flawed as No. 4 and No. 5 seeds, respectively.

If you’re going to find a team with long odds to win the NCAA Tournament, this is where it’s going to happen. A team like VCU or Northern Iowa, which has a rich history of pulling off upsets could ultimately see things setup nicely for it, while it isn’t even out of the realm of possibility that the winner of that 8/9 game between St. Joe’s and Cincinnati reaches the Promised Land with the way the rest of this bracket is shaping up.

If you found this article interesting, be sure to check out “March Madness 2016 Explained In Numbers.”