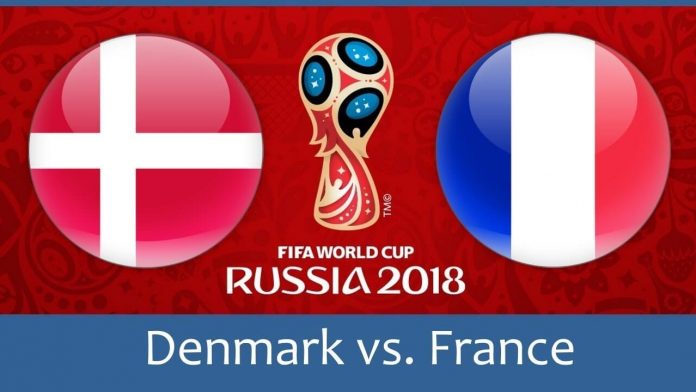 France has looked solid to open up group stage action at the World Cup, totaling six points in its first two matches with wins over Australia and Peru. France can capture Group C with a win or a draw against Denmark in the final round-robin matchup of the group stage round.

Denmark is in good shape to advance to the next round but a loss would leave the possibility of Australia passing them via tiebreaker. Denmark doesn’t want to leave the chances of advancing up to fate so a win or a draw would allow them to breathe easy.

France is one of the best teams in the world and has played solidly thus far. Denmark is a worthy foe and can win the group with a victory in this match. It should be an intriguing showdown.

The Denmark-France World Cup match will be held at Luzhniki Stadium in Moscow, Russia. The match will take place on Tuesday, June 26th, 2018, at 9 a.m. ET.

France enters into this match as the favorite, as the spread lists it as the .25-goal favorite. France’s odds at that line are -139 and more than 70 percent of the money has poured in on them to cover. France’s odds to win on the moneyline are listed at +118, while Denmark is the +391 underdog. A draw is being wagered on at +167.

The goal total is listed at 2, with the “over” the more popular choice at odds of -103. The oddsmakers clearly believe this will be a competitive matchup so it should be a fun one to watch.

In Their Last Match

France continued its hot start to the World Cup in their most recent match with a 1-0 victory over Peru. It came on the heels of a 2-0 win over Australia in the opener to become the lone team in Group C with six points. Kylian Mbappe had the goal to knock off Peru. At 19 years and 183 days, Mbappe became the youngest player to score a goal for France in a World Cup.

France picked up goals from Antoine Griezmann and Aziz Behich in their opener, and all three goal-scorers would love to add to their total against Denmark. The team’s defense has been solid through the first two matches, not ceding a single goal as of yet, and this matchup could be low-scoring once again.

Denmark jumped ahead 1-0 on Australia in the seventh minute last time out but couldn’t hold the lead. Australia scored on a penalty kick in the 38th minute and the contest ended a 1-1 draw. The point was still important for Denmark but three would have been nice to clinch a spot in the next round before this match.

Denmark began the group round with a 1-0 win over Peru, getting a goal from Yussuf Poulsen in the 59th minute.

It’s not set in stone yet, as a win would move Denmark past France, or a loss could conceivably drop them out of the World Cup. There is a bunch on the line in this one.

Denmark vs France – Who To Bet On

Both sides would be fine with a draw, which could lower the motivation late in the contest. This should be a low-scoring affair, and don’t be surprised if it ends in a tie in World Cup wagering. Take Denmark to cover the spread as these teams are pretty evenly matched.

Our Pick To Win: Denmark