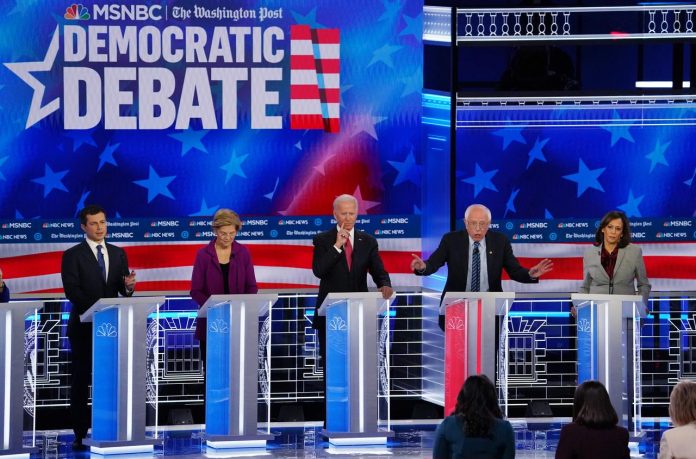 Last week the call came from the Democrat Party establishment for all remaining candidates to consolidate around the banner of former US Vice President Joe Biden in order to ward off the challenge of avowed socialist Bernie Sanders.  The theory is that Biden can be sold as a “moderate” to an unsuspecting American electorate.  However, the fact remains that there is very little difference in the US Senate career voting records of Biden or Sanders.  But that’s for the American “news” media to make sure voters never discover.  With Biden now the clear-cut front runner attention turns to who he will select as his Vice-Presidential running mate.  Let’s examine the field.

The Elephant in the Room

Not only is Joe Biden a gaffe machine that has been increasing his misstatements and brain locks but he is 77 years old.  It will only get worse.  This makes his choice for Vice President even more critical.  Will he play demographics or competence?

The quick rise of Harris was done the old-fashioned way; she had an affair with a married man that was 30 years her senior.  San Francisco mayor Willie Brown cleared the decks for Harris to rise in power thanks to her sexual favors.  She subsequently became first Attorney General and later Senator from the one-party state of California.  When exposed to the rest of the county in her bid for the 2020 Democrat Presidential nomination she was routed for the empty skirt that she is.  Harris pretends to be a black female candidate except there is one problem; Her father is from Jamaica and her mother is from India.  Furthermore, per her own father’s admission, her descendants owned slaves!  Harris has no accomplishments at all and would epitomize a pander play by Biden.  She also comes from a state the Democrats already own.

Much like Biden this congresswoman from Minnesota gets by with a moderate image despite a hard-left voting record that Barack Obama himself would envy.  But Klobuchar did impress some with her depth in the Democrat debates and being from the Midwest also works in her favor.

Abrams remains bitter about her 2018 defeat in the Georgia Governor race. She has been quite adamant with accusations that the election was rigged.  Abrams is an avowed and unapologetic “Identity Politics” candidate.  She also has no experience in major public office and would be another pander play.

The senator from Massachusetts is a hard-left progressive that proved unlikeable in the Democrat primaries. Warren does have a plan for everything but those plans were viewed as not realistic or feasible.  Her constant lying about herself and know it all attitude proved toxic in the voting booth.

“Mayor Pete” of South Bend brings the Politically Correct “twofer” of being young and gay.  He also has a record of military service.  His performance in South Bend is mixed at best but he did impress some in his 2020 bid for President though his message was often mixed.  Coming from Indiana works in Buttigieg’s favor in that it is a midwestern industrial state.

This is a pure public and name recognition play.  She is old, corrupt, in questionable health, lost to Trump, and has always had an entitled attitude.

This is another overlay on an individual living large with millions of dollars, multiple luxury mansions and A-list celebrity status.  Barack and Michelle Obama set out to do good and have done very well indeed!

These two African-American men merit serious betting attention.  Booker is a senator from New Jersey while Patrick served as governor of Massachusetts.  They would balance out the ticket racially and have better experience than others in the field.

Inslee is the current governor of Washington while Hickenlooper served as Colorado’s governor.  Both are older, white, but extreme environmentalists that would cater to the urban sophisticate demographic.  However, both come from solid Democrat states.