The Golden Rule of the 2020 US Presidential Election is that there is no such thing as “journalism.”  Or “news.”  Or “reporting.”  Instead what there is in place of such desperately needed functions is incessant left wing propaganda.  Major media outlets have long given up pretending to be fair.  It began when Barack Obama put a thrill up the leg of “journalists” in his 2008 presidential campaign.  Republican doofus and nominee John McCain learned that his buddies in the full court liberal press were simply using him as the useless idiot that he was to criticize fellow Republicans and the Grand Old Party voter base.  Once up against Obama, McCain was thrown to the wolves just like every other Republican before him as the press indulged in its slobbering love affair with Obama.  But back then they did at least half pretend to be sort of fair.  But once Donald Trump announced his candidacy for the 2016 presidential race the press became in your face publicists for Hilary Clinton and the Democrats.  And one of their most useful tools was and is the manipulation of polls.

After President Donald Trump gained almost 80 cents on the betting line things have stabilized.  Former Vice President Joe Biden remains a small favorite.  All things considered it’s a miracle Trump is in the race at all.  America has fully shown itself to be an institutionally hard left country.  Media, pop culture, education, journalism, and now sports are all lined up vociferously against Trump.  What the institutional hard left can’t cover up is the strong Trump economy and stock market along with American disgust at riots and their total distrust of the “news” media.

Devils in the Details – Polls That Aren’t Polls

The news media loves to tout polls showing Joe Biden leading Donald Trump in various scenarios and polls.  The wider the gap in Biden’s favor the more excited is the “reporting.”  But a closer look shows how utterly rigged those polls actually are.  When one reads the fine print, it is revealed how the polls over sample Democrat voters time and again.  So too are REGISTERED voters oversampled when compared to LIKELY voters.

The full court liberal press has learned nothing from 2016 when they were totally discredited after all but guaranteeing a Hillary Clinton win.  Just like now they were running rigged polls that were skewed in favor of the Democrats.  Then on election day the bomb went off.  A public that was lied to for several months was in shock.  Now it’s worse than ever, if that is even possible. 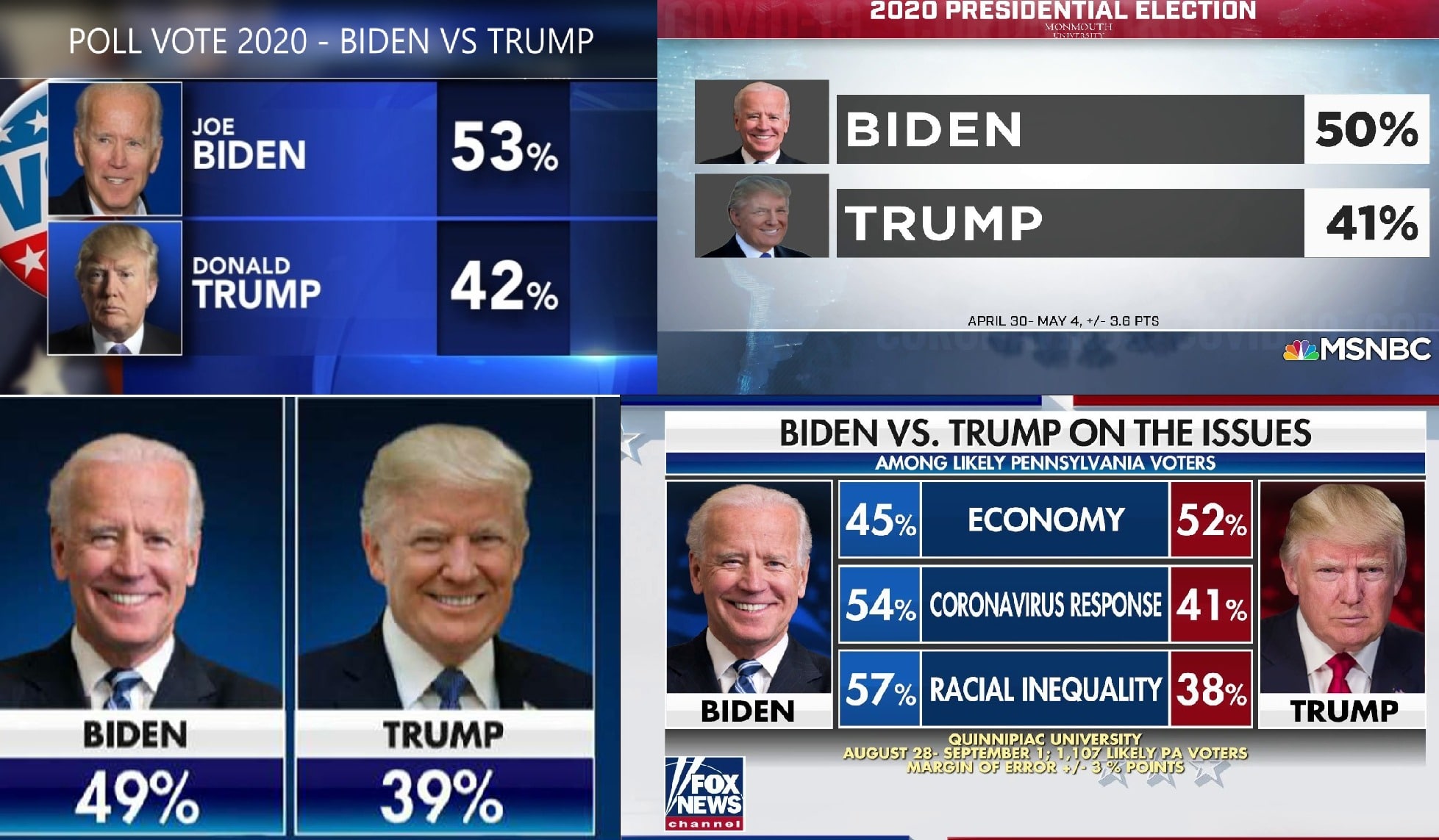 How to REALLY Read the Polls

When handicapping the 2020 US presidential election the first order of business is to know that actions speak louder than words.  Especially when you read the polls.  Late Democrat statements are classic examples.

Speaker of the House Nancy Pelosi said a few days ago from the well of the House of Representatives that violent protests are unacceptable and should be punished by the fullest extent of the law. This statement was utterly fascinating in that was on the heels of over four months of silence as Democrat controlled cities were set afire.  Innocent victims, many that were African Americans, had their homes and businesses destroyed.  Many more were killed.  All the while Democrat politicians remained silent as their lapdogs in the “news” media said that the protests were “peaceful,” even as buildings were on fire behind the “journalists” filing their lies sold as “news.”

When Pelosi made that sharp turn in language it’s the ultimate tell that the Democrats internal polls are not nearly as good as what is being “reported.”
Now Democrat vice presidential nominee Kamala Harris is playing the victim card that has made her famous.  She recently said that she decided to go into politics upon discovering that her best friend in school revealed that she was allegedly being molested by her father.  This is likely a tell that women voters are defecting to Trump, forcing Harris to play the emotion card.