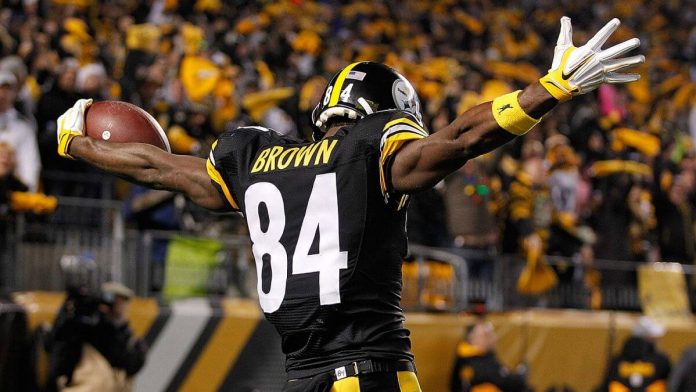 Antonio Brown has presented one of the best values in the NFL over the course of the last several seasons. He was a sixth-round pick in the 2010 NFL Draft and played for a base salary of under $1 million in each of his first six seasons in the league. Now, he’s got a massive contract $68 million deal that will see him stay with the Pittsburgh Steelers through 2021. With that massive contract though, comes massive expectations.

Last year, Brown lived up to the hype, recording 100 + receptions and 1,200+ yards for the fourth straight season and double-digits of receiving touchdowns for a third straight year.

This season, Brown has even loftier goals on his NFL props at BookMaker.eu. He’s faced with an over/under in receiving yards of 1,550 along with 11 touchdowns. Last season, he had 1,284 yards and 12 trips to the end zone.

In 2017, Brown should once again be a top target. Sure, Pittsburgh invested a second-round pick in JuJu Smith-Schuster, but he isn’t going to get Ben Roethlisberger to stop looking the way of his favorite wide out. That said, averaging 97 yards per game is tough, and Brown is always an added risk for an injury because of his small stature and his presence on the punt return team. It should be noted though, that Brown hasn’t missed a game since 2012.

One of BookMaker’s unique props for the 2017 season is how many penalties Brown will get for excessive celebration on touchdowns. The over/under is set at 1.5 with vig on the over set at -160. Of course, there has been ample news this offseason on the NFL’s rule change regarding touchdown celebrations. Muddied water still for sure, but certainly water Brown will be willing to test.

Odell Beckham Jr. finished last season with 1,367 yards, third most in the NFL. He’s had at least 1,300 yards in each of his first three seasons in the league, and though 10 touchdowns was a career-low, it’s hard to argue with a man who has already visited the end zone a total of 35 times in just 43 career games.

Beckham has an over/under of 1,350 receiving yards and 12 touchdowns. Those might seem like slam dunk overs, but it’s worth remembering that there is more top talent in the Big Apple nowadays. The Giants have given Eli Manning a ton of help in the offseason, signing Brandon Marshall from the Jets and drafting Evan Engram from Ole Miss, one of the most athletically-gifted tight ends we’ve seen come out of college in recent years. Let’s also not forget that Sterling Shepard had some massive games in 2016, and now that he’s in his second year with the club, he should have a bigger impact as well.

There were three rookie wide receivers taken in the first round of the NFL Draft, and all three were top-10 selections. Corey Davis landed with the Titans at No. 5, Mike Williams with the Chargers at No. 7 and John Ross with the Bengals at No. 9. Yet it’s Zay Jones who is the favorite to have the most receiving yards as a rookie this season.

Jones was the fourth receiver picked in the NFL Draft, going No. 37 overall to the Bills. He was incredibly productive at East Carolina, racking up 4,279 yards and 23 scores. The reason why Jones is the -140 favorite to lead all rookies in receiving is because of his status on the Bills. Ross will be nothing more than a slot receiver for the Bengals at the outset, and Davis will be starring in a conservative passing game. But Jones might end up being the top receiver in a passing attack that tends to stretch the field.

Even if Jeremy Maclin lands in Buffalo as is expected to be the case, that shouldn’t affect Jones all that much. Maclin will need time to incorporate into this offense, and Sammy Watkins has really turned into a huge bust in his career. Jones is a breath of fresh air at the receiver spot, and there’s absolutely no depth behind him. Even if he turns out to be nothing but a slot receiver, he should still get at least 40 snaps per game and at least 5-6 targets per game, and that should put him on a pace to be an Offensive Rookie of the Year candidate.

Rookie with most receiving yards during 2017-18 NFL regular season

Check out the latest NFL odds and props.