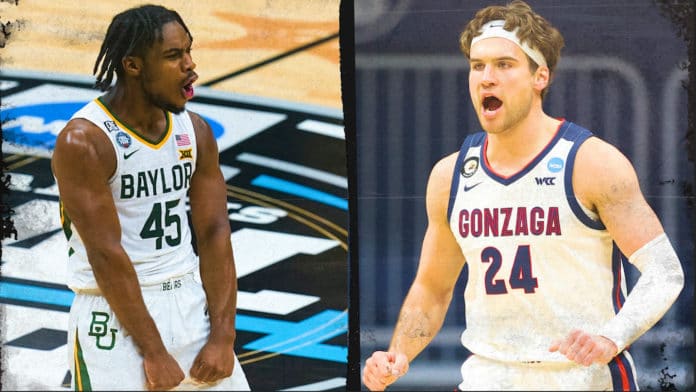 Despite all the upsets we saw during the NCAA Tournament we end up with the two best teams during the college basketball season squaring off in the national championship game. The Gonzaga Bulldogs kept their perfect season alive with a thrilling overtime win over UCLA in the semifinals. They are looking to become the first undefeated champion in 45 years and have to get past the Baylor Bears on Monday to enter the history books.

The teams jostled for the top ranking in the national polls all season and things could have been settled back in December if COVID hadn’t gotten in the way. Instead that game was canceled setting the stage for Monday’s tilt. The Zags have been favored in every game this season and they’re laying 4-points on the opening line.

The national championship game will air live on CBS at 9:20 p.m. ET on Monday, April 5, 2021 from Lucas Oil Stadium in Indianapolis, IN.

Baylor advanced to the national championship by beating Houston at its game. The Bears throttled the Cougars holding them to 20 first half points and 38.2 percent shooting for the game. They easily covered the 5-point line improving to 4-1 ATS in the Tournament with payouts in the last four.

We’ve talked about Baylor’s offense quite a bit and it’s something worth discussing since they average over 85 points and lead the country shooting nearly 43 percent from three-point range. But their defense has been solid in the Tournament holding three opponents to less than 60 points and giving up only 60 points per game. Still, the OVER is 8-2 in their last 10 games. For the first time this season the Bears are catching points on the line and the total of 159.5 is the highest in any game.

If the Zags needed a gut check they got it from UCLA on Saturday. Having disposed of their previous 27 opponents by at least 10 points, they needed overtime and a wild heave from Jalen Suggs to get past pesky UCLA 93-90. It’s a good sign they were able to prevail having never been tested until Saturday. The Zags remained perfect at 31-0 this season looking to become the first undefeated national champion since the Indiana Hoosiers in 1976.

The Zags failed to cover the 14-point line against UCLA losing against the spread for the first time in the Tournament. They’ve been favored in every game this season with this only the sixth game having a single-digit line. Gonzaga was a 4-point favorite in the season opener when they pounded Kansas 102-90. They are also 4-1 ATS in games when they were favored by less than 10 points.

They’ve been trying to catch Gonzaga all season now the Bears have the chance to do that and put a bow on their season. Baylor is likely getting more respect after what happened in the semifinals. Riding a ferocious defense the Bears built a 25-point halftime lead and cruised to the 78-59 win over Houston with five players scoring in double figures.

Like they did all season, Jared Butler, Davion Mitchell and MaCio Teague paced the offense accounting for 40 points. They also got some rest in the second half when the game was locked up. That should come in handy Monday night when dealing with Gonzaga’s relentless pressure on both ends of the court. Houston wasn’t the most explosive offensive team this season but the Bears made it tough holding them 38.2 percent shooting and just 6 of 19 from behind the arc.

The win over UCLA showed that Gonzaga is vulnerable. For the first time in the Tournament the Zags played from behind in the second half. They also looked out of sorts at times. Still they were able to pull out the victory on a near half court buzzer-beater in overtime to keep their ride to history alive. They hadn’t played a game decided by a single digit singe knocking off West Virginia 87-82 way back in December. If you thought they might fade when facing adversity, think again.

Jalen Suggs was the hero against UCLA knocking down the game-winner from near half court. But the Zags have a number of players who can step into that role. Drew Timme scored 25 points in the semifinal and will be a key against a Baylor defense that will have a tough time defending him. The big fella is an expert passer and will make the Bears pay when they double team him. He can also create his own shots.

Gonzaga didn’t play its best against UCLA, but they got a much needed test ahead of the title tilt. The offense was efficient hitting their season scoring average while making 58.7 percent of their shots. The Zags will need more production from Corey Kispert, who was just 2 of 8 from three-point range on Saturday. Gonzaga is a balanced club and is much better offensively than Houston, and I think that proves to be the difference.