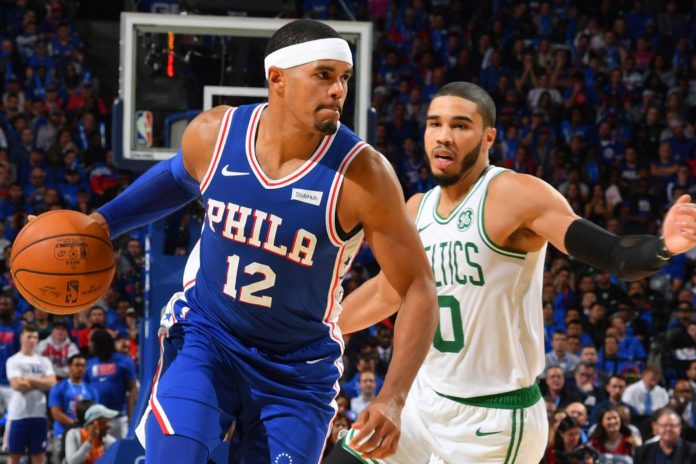 Winners of two straight the Boston Celtics are back at .500 as they prepare for a showdown with Eastern Conference co-leader Philadelphia 76ers on Tuesday. There isn’t much separation in the middle of the conference standings with the Celtics as close to the No. 4 seed as they are to the No. 9 spot.

The next few weeks will determine which direction the Cs are headed as they try to become more consistent in their play. The Sixers welcomed back Joel Embiid last week after missing 10 games. Philly went 7-3 in those games maintaining their hold on the top spot.

Tuesday’s game will air live on TNT with tip off at 7:30 p.m. ET from TD Garden.

It’s a quick turnaround for the Sixers, who recently finished a six-game road trip in 12 days by going 4-2 SU and 3-2-1 ATS. The return of Joel Embiid sparked a win over Minnesota on Saturday and there was little left when Philly fell to Memphis by 16 on Sunday. The Sixers survived without Embiid and enter the week tied with Brooklyn atop the Eastern Conference with a 34-16 ledger.

They have lost four of their last five against the spread and are 27-21-2 ATS overall. They’ve been a good road team posting the most away wins in the East while going 7-2 SU and 6-2-1 ATS in their last nine roadies. Embiid sat out Sunday’s loss to Memphis avoiding back-to-back games to rest his injured knee. We will see him back in the lineup against Boston, who he totaled 80 points against in two previous Philly wins.

Don’t let the two-game winning streak fool you. The Celtics are fighting for their playoff lives tied with New York for the No. 8 seed in the conference entering the week. They are just a game behind Atlanta and Miami for the No. 4 spot and two-games ahead of Indiana in the ninth position. Boston is still looking for some consistency in its game and have benefitted from the play of recently acquired Evan Fournier. The Celtics have also picked it up a notch defensively allowing an average of 94 points in wins over Houston and Charlotte.

Those teams won’t scare many opponents, especially the Hornets, who were without their three leading scorers. It was a game the Celtics were favored to win and they did, which is a good sign. They haven’t beaten the Sixers this season going 0-2 SU and ATS allowing nearly 120 points per game.

Things went as well as could be expected without Embiid allowing the Sixers to maintain their hold on the top spot in the East. They went 7-3 in the 10 games he missed and Embiid returned with a flourish scoring 24 points with eight rebounds in a 122-113 win over Minnesota on Saturday night. Being cautious with his return the Sixers sat Embiid for Sunday’s tilt and the result was a disappointing setback to Memphis.

The good news for Philly is that Embiid will play on Tuesday. And he’s destroyed Boston this season scoring 42 points in a 117-109 win. Two nights later he tallied 38 points in a 122-110 triumph. The Sixers have lost three straight on the parquet floor going 0-3 ATS, and they struggled offensively in those games not scoring more than 101 points.

With six of their last seven wins against teams below .500, the Celtics have shown the ability to beat up lesser squads. It’s a whole different ball game when it comes to the better clubs. The Cs are just 9-16 against teams above .500, including a pair of setbacks to the Sixers from back in January. What we see is pretty much what we get at this point. The Cs have hovered around .500 for most of the season and haven’t been able to put things together. They did have a four-game winning streak ahead of the All-Star break when it looked like they were coming out of their shell. They dropped four of five out of the break and are just 6-8 SU and 7-7 ATS since play resumed.

Boston is hoping to build off its two-game winning streak. They throttled Charlotte 116-86 on Sunday behind double-figures from all five starters. Jayson Tatum hit 8 of 15 shots for a team-high 22 points. Tatum, Jaylen Brown and Kemba Walker, the three leading scorers, combined to attempts 26 three-point shots and the Celtics launched 54 as a team. “The last two games, moving the ball has been good. Hopefully we can play defense like we did tonight more often,” Brad Stevens said after the Charlotte game.

I don’t have a lot of faith in the Celtics, especially trying to defend Embiid in this one. We saw what Embiid did in the earlier games and there isn’t much saying the Celtics can change the results. Boston needs wins to stay in the playoff race, but their inconsistent play against strong teams is troubling.