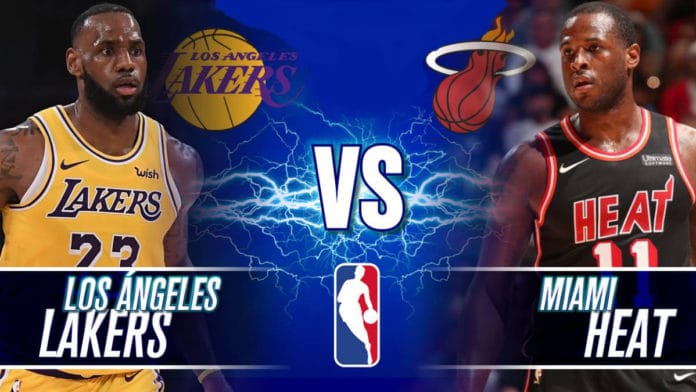 It’s a small consolation for the Miami Heat but they can in some way make up for the NBA Finals loss by sweeping the season series from the Los Angeles Lakers when the clubs hook up on Thursday. It wasn’t that long ago the Heat’s unexpected playoff run ended in a six-game loss to LA.

Of course LeBron James and Anthony Davis did a bulk of the work in the Florida bubble and those two remain out as the Lakers continue their current road trip. Miami won the first Finals rematch 96-94 when the Lakers played without AD and Dennis Schroeder. The Lakers are 4-5 since James went on the shelf with an ankle injury.

Tip off is scheduled for Thursday, April 8, 2021 at 7:30 p.m. ET from the American Airlines Arena. The game will be broadcast live on TNT.

The Lakers are doing their best to survive without their top two players, who also happen to be two of the best in the NBA. They suffered through a four-game losing streak when James went down but have rebounded to win four of their last six games going 3-3 ATS in that span. They left the state of California for the first time in several weeks knocking off the Raptors 110-101 in Tampa on Tuesday night.

One area that’s suffered is offense so getting 110 points is nice to see. It was their third highest point total in the last 10 games where the UNDER is 8-2. Their stellar start to the season means the Lakers aren’t in danger of missing the playoffs. They have dropped in the Western Conference standings, though, and are currently fifth just 1.5 games ahead of Portland. Both James and Davis are progressing in their rehab and should be back soon allowing the Lakers to make a run at the Nuggets and Clippers, who are just ahead of them in the conference standings.

It’s been a weird stretch for the Heat as they look for consistency in their game. Things came together in mid-February when they won 11 of 12 games and were 9-3 ATS creating some separation from other clubs in the East. Included in that run was a payout triumph over the Lakers as a 3.5-point dog.

It all came crashing down just as quickly, tough. The Heat proceeded to lose six in a row going 0-6 ATS nearly giving back all the ground they made up. A five game SU and ATS winning streak was ended by Memphis on Tuesday. Overall the Heat are 26-25 SU and 22-18-1 ATS.

The Lakers are one of the better road teams in the NBA, but most of that work was accomplished with AD and LeBron in the lineup. They literally couldn’t lose early in the campaign with victories in their first 10 roadies. They are trying to adapt without their superstars and recently added another piece to the lineup in Ben McLemore. And there’s a good chance we see Andre Drummond back in the lineup after he exited his team debut last week with a foot injury.

The scoring by committee approach worked against the Raptors with seven players reaching double figures, but it’s been a struggle. Including the game James was injured the Lakers are averaging just 100.4 points and failed to score 100 in half of those 10 contests. The Lakers are 4-5 without James and 11-12 since AD went down.

They probably won’t make up enough ground to challenge the top three teams in the East, but the Hawks are right there for the fourth-seed. Unfortunately so are a number of other teams. A nice winning streak can elevate a team in the standings and a slump can be devastating. That’s why the Heat would like to avoid the recent trend of losing a bunch of games in a row. Memphis ended their five-game winning streak last month and it was the first of six straight setbacks. The Griz also just stopped a four-game Miami heater on Tuesday.

“We’re much better than we showed. It shows you how fragile things could be in this league. You’re playing well and than a team can come in and play as well as they (Memphis) did against us,” Erik Spoelstra said. The Heat were dominant at home last season before the shutdown but that hasn’t been the case this season. The loss to the Griz has Miami at 14-13 SU and 10-16-1 ATS inside the AAA.

It took a few games for the Lakers to figure out how to win when Davis was injured. They also went through some rough spells after James hit the shelf. But they’ve been playing better recently and their defensive effort against the Raptors was what Frank Vogel liked to see. They’ll have to do it defensively since the scoring just isn’t there making the UNDER a solid bet.