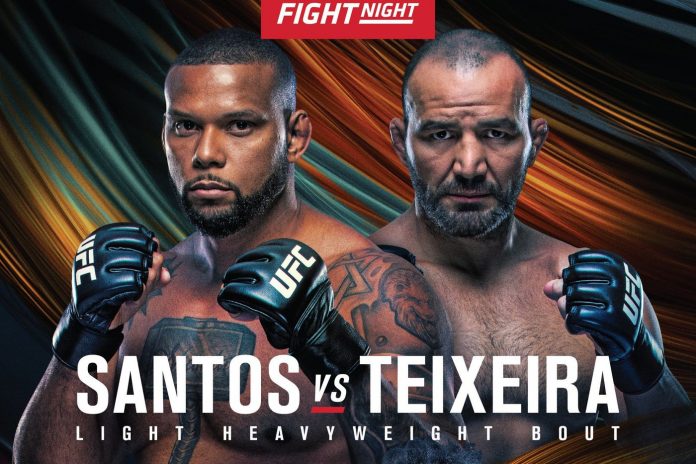 It’s been a long, long time since the 205-pound division felt so wide open. For nearly 10 years – ever since a young Jon Jones hoisted the strap in 2011 – the weight class has been dominated by Jones and Daniel Cormier, two of the best to ever do it. Now, both of them have moved on, and Jan Blachowicz is the champion.

Perhaps you’re one of those folks who never believed that Blachowicz would ever be the champion (*raises hand*). But that’s the reality, and with all due respect to Polish power, the rest of the light heavyweight class must be drooling at the prospect of challenging for the title. It’s certainly the case for Thiago Santos and Glover Teixeira, who clash in this weekend’s Fight Night main event.

The last time we saw Santos was 2019, when he was chasing Jon Jones around on one leg – the Brazilian tore his ACL, MCL, PCL and meniscus early in the championship fight. Despite the injury, the 36-year old played the aggressor most of the night, battling the 205-pound GOAT to a split decision. There are still a fair number of folks who believe that Santos should’ve walked away the champion. The fact that it’s a defensible belief is amazing, considering the opponent.

Teixiera also faced Jones for the title, all the way back in 2014. While he was easily handled by Jones, Teixeira has managed to remain a top-10 fighter ever since. After playing gatekeeper to the elite for years, Teixeira has reeled off a four-fight win streak that most recently ended with a complete and utter domination of Anthony Smith. Now, at 40 years old, Texeira finds himself one win away from another shot at the title. That’s a definite feel-good story for ya.

The UFC odds at BookMaker.eu are siding heavily with Santos here, opening with the Brazilian as a -200 favorite and Teixeira at +158 on the comeback. Let’s break down the fight and get to your best betting picks at the online sportsbook.

We want to see the Brazilian get down to the -150 range before we pull the trigger (not happening). Teixeira is one of the most experienced fighters in the division, with the ability to outwrestle strikers and outstrike grapplers. Nobody would be surprised to see him drag Santos to the ground and keep him there.

On the other hand, Teixeira is 40 years old. At some point, experience can’t cover for a decline in physical ability. Glover was never a fast guy to begin with, but now he can almost be described as “lumbering” when he meets younger, more explosive fighters. Santos might not be a speed demon in the cage, but he’s got excellent hand and foot speed – and that should be a serious problem. We just don’t have enough confidence that he overwhelms Glover at the current price.

Both guys are notable finishers with serious killshot power. In a five-round fight, they’ll each have ample opportunities to complete finishing sequences. 10 of Santos’ last 12 fights have ended before going to the judges’s scorecards, and his TKO finishes are all over the map – from body kicks to spinning wheel kicks to hellbows to good old fashioned punches. Five of Glover’s last seven fights ended early as well, and his ground game has become just as dangerous as his boxing.

Bet It: Teixeira to win by submission +650

If you’re feeling lucky, this is your bet. Teixeira really doesn’t get enough credit for his wrestling and submissions. He entered the UFC as a knockout artist, and hasn’t really shed that label ever since. But it’s not uncommon to see him grind down strikers like Jared Cannonier and Ion Cutelaba. If he lands a takedown early, we’d check in with the live UFC odds to see what you can get on this victory bet. Santos is not an easy guy to submit, but don’t underestimate Teixeira’s sneaky good grappling.