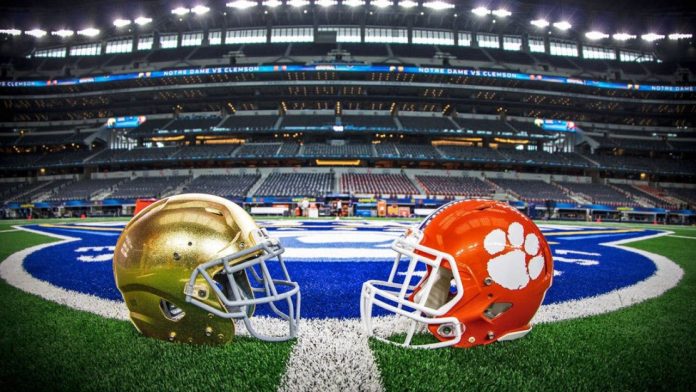 The big news for this showdown isn’t that both teams are among the top-5 in the national rankings or that they’re both undefeated with first place in the ACC at stake. Nope, the concern is whether or not the Clemson Tigers can continue their dominance within the conference without Trevor Lawrence behind center. Lawrence will miss a second straight game following a positive COVID test when No. 1 Clemson visits No. 4 Notre Dame Fighting Irish on Saturday. And one lengthy winning streak will come to an end. Clemson has won 28 straight over ACC foes while the Irish put a 22-game home winning streak on the line.

The game between the Clemson Tigers and Notre Dame Fighting Irish will take place at Notre Dame Stadium at 7:30 p.m. ET on Saturday, November 7, 2020. The game will be televised live on NBC.

Even without Heisman hopeful Lawrence and playing on the road, the Tigers opened as a 5-point favorite. And with action on the visitors the spread has spiked to -6. This will be the first time this season Clemson plays against a line shorter than two-touchdowns. They covered the 14-point spread in a 42-17 win over Miami a few weeks ago. Everything else has been at least 26 points with the Tigers just 1-5 ATS in those games. During their current 28-game winning streak against ACC foes, the Tigers are 19-8-1 ATS while cashing the OVER in seven of the last 10.

You won’t see Notre Dame playing as a home underdog very often. In fact it’s happened just once since the start of the 2015 season. That came in the 2018 opener when the Irish were catching 3-points against Michigan. They won that game outright and have triumphed the last three times they were getting points at home. Notre Dame failed to cover the 20.5-point line in a 31-13 win over Georgia Tech, failing to 2-4 ATS this year. That’s the same Jackets team Clemson walloped 73-7 back on Oct. 17.

The stage wasn’t too big for D.J. Uiagalelei, who got the start last week in place of Lawrence and threw for 342 yards and a pair of touchdowns in the comeback victory. In fact the freshman showed veteran poise leading his club back from an 18-point deficit in the largest come-from-behind victory in program history. It also helps to have an abundance of playmakers. Travis Etienne totaled 224 scrimmage yards with a pair of touchdowns while Cornell Powell had 11 receptions for 105 yards. The Tigers amassed 448 total yards and scored the final 24 points to erase an 18-point deficit.

Uncharacteristic mistakes and defensive letdowns had Clemson backers scratching their heads last week. Etienne’s fumble was returned for a score and Notre Dame transfer Phil Jurkovec tossed a pair of first half touchdown passes as BC jumped to a 28-10 lead. The Tigers clamped down in the second half holding the Eagles to 66 yards and zero points without three starters. Clemson allows less than 100 yards per game on the ground and will be tested by Notre Dames massive front and strong rushing attack.

The biggest beneficiary of brand recognition, Notre Dame can put that to rest with a statement win, something they’ve rarely done under Brian Kelly. The Irish have played a top-10 team 11 times since 2010 winning just three of those matchups and they are 1-7 in their last eight such games. One of those recent setbacks was against Clemson, 30-3, in the 2018 CFP semifinals where Ian Book was terrible throwing for 160 yards with an interception. We’ve seen the Irish pick up the pace offensively after a lackluster 12-7 win over Louisville. They swept a two-game road trip beating Pitt and Georgia Tech by a combined 76-16.

It’s all about the defense in South Bend and the group will get a chance to show why it’s ranked so highly. The Irish have held five opponents to 13 points or fewer and no team has scored more than 26 points. They rank fourth nationally in points allowed at 10.3 and are among the top-8 in run defense, pass defense and total defense. They haven’t faced a team like Clemson, though, which can do damage even with a backup quarterback.

This is why Notre Dame aligned itself with a conference this season. COVID messed everything up and the path to the CFP is better attained winning a conference title than playing independently. There’s also a good chance we see these teams competing for the ACC title next month, which makes Saturday’s game more about bragging rights. The Tigers showed how well balanced they are in last week’s win and Uiagalelei can play.