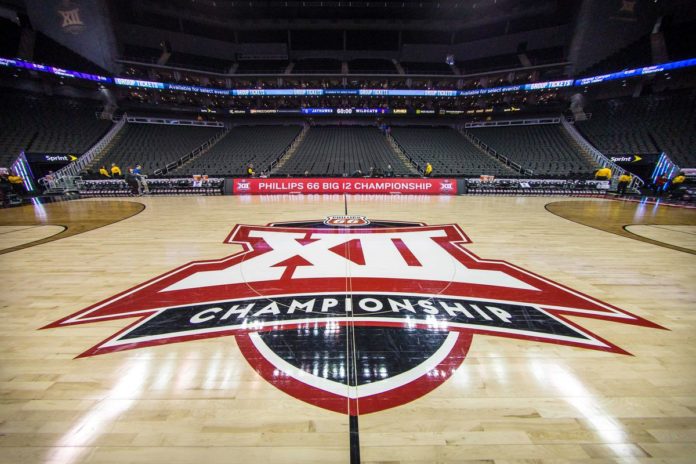 It looks like the only thing that can stop the Baylor Bears from winning their first Big 12 Tournament title is COVID. They were rarely tested on the court cruising to a 21-1 overall record and 13-1 league slate and they opened as a negative odds favorite against their conference brethren. The Big 12 and the conference tournament have been a playground for the Kansas Jayhawks, who own a record 11 tournament titles. A strong finish to the regular season, including a home win over Baylor, got the Jayhawks the No. 2 seed. The next five teams after Baylor on the odds board are packed tightly and every one of them has the potential to knock off the Bears in a one-game scenario.

The Big 12 men’s basketball tournament runs from March 10 to March 13, 2021 from the T-Mobile Center in Kansas City, Mo. The ESPN family of networks will televise every tournament matchup.

Despite what oddsmakers say, by no means is Baylor a lock to win the conference tournament. Can the Bears score? Absolutely. Can they play defense. Yep. Are they the best team in the Big 12? Probably. But all that means little when the teams take the floor. And if you’ve witnessed conference tournament action in the past you know that the best team doesn’t always win.

The odds suggest Baylor should romp through the three rounds to claim the title. After all, when not dealing with a COVID shutdown the Bears were nearly unstoppable. They stumbled a bit after their last pause that lasted three weeks. They barely got by last place Iowa State needing a late comeback to snag the 77-72 victory. A few days later against a stiffer opponent, the Bears were still feeling the effects and suffered their lone setback falling 71-58 to Kansas. Getting their legs back the Bears rolled over ranked opponents West Virginia, Oklahoma State and Texas Tech to finish the campaign on a high note.

You can’t talk Big 12 hoops without mentioning Kansas. I guess we did that a little bit already, but let’s dive deeper. We knew at the beginning of the season that there would be some growing pains for this bunch. Up until a few weeks ago the Jayhawks were apparently still growing. They lost three straight and four of five to drop from the national rankings for the first time in years. A strong finish to the season got them the No. 2 seed meaning they won’t face Baylor until the championship, assuming both teams make it that far. The Jayhawks won seven of their last eight, including that win over Baylor, sending two other ranked foes to their demise.

There are a few other strong teams in the conference so let’s get off the Baylor and Kansas ride. WVU and Oklahoma State both won 18 games overall and 11 in league play. The Texas Longhorns and Texas Tech Red Raiders each won 17 games. So there is no shortage of teams capable of making a run. Sometimes all it takes is one player to get hot and everything changes.

OSU has just the player in Cade Cunningham, who was named the league’s player of the year and freshman of the year. The kid can fill it up like he did earlier in the season against Oklahoma when he dropped 40. Cunningham is making 41 percent of his three-attempts while averaging 19.7 points, 6.3 rebounds and 3.5 assists.  Another player who can score in bunches is Texas Tech’s Mac McClung. And he isn’t afraid to shoot the basketball. McClung averages 16.7 points and will look to make up for a few bad outings in recent games. He scored just seven points in a loss to Baylor on Sunday and had only four points a few games earlier against TCU. Any hope of Tech escaping with the automatic berth rests in McClung’s hands.

Baylor is the most well rounded team in the conference. They averaged a league-best 85.3 points while also shooting nearly 50 percent from the floor and 43 percent from behind the arc. Opposing defenses can’t just concentrate on one player since the Bears have a backcourt that attacks, shoots and scores effortlessly. Jared Butler is averaging 17.1 points and leads the Big 12 in three-point percentage and steals. MaCio Teague scores 15 points a game with Davion Mitchell supplying 13.6 points. And Baylor can play defense, too, which often goes overlooked given how easily they score.