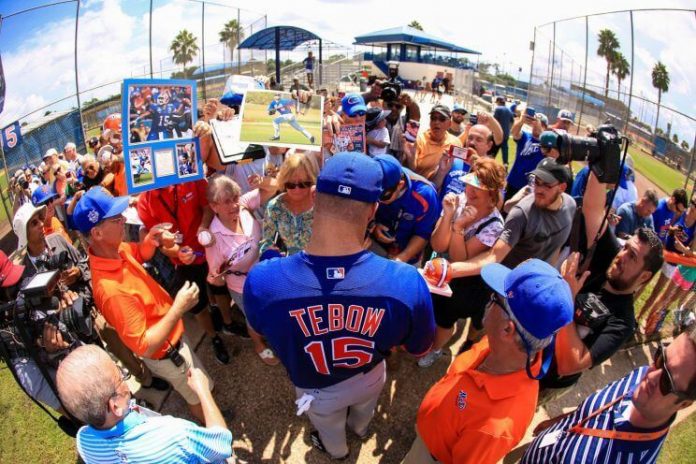 Tim Tebow might be the most popular baseball player in Arizona. After playing for a few games in the Florida Instructional League in September, the New York Mets have sent Tebow off to Arizona for some fall league baseball there.

The competition is definitely a step up from what Tebow saw down in the Sunshine State, and BookMaker.eu has Tim Tebow props posted for his degree of success (or failure) in his second professional baseball stint. Tebow’s Fall League performance is going to determine his MLB odds for the 2017 season.

(Click to view the latest odds on baseball prop bets)

Though it would be something to see an Arizona Fall League pitcher take a throw at Tebow, clearly, the most likely scenario here is the strikeout. Tebow struck out six times in 16 plate appearances, going 4-of-14 with a home run and two walks in the Florida Instructional League, but this is a far different challenge.

The Arizona Fall League has some top prospects in it with K/9 ratios well beyond 9.00. Sure, Tebow popped a homer in his first professional baseball pitch, but this is a different challenge. The former Florida Gator’s baseball odds were +220 to strikeout in his first at bat, before this early line movement pushed the number to +150.

Again, clearly, the over is the way to go here. Walks don’t count as at bats, remember, so even if Tebow does get on via the base on balls, that won’t hurt us for these purposes.

Granted, striking out eight times in 20 at bats is the baseball futures equivalent of a major leaguer striking out 240 times over the course of a full season, but then again, most major leaguers have a lifetime of at bats under their belt, while Tebow has been busy honing his craft as a lousy quarterback with a noodle of an arm by NFL standards.

Here’s a number Tebow can beat. The one thing we won’t discount about Tebow is his ability to really mash the baseball. He weighs 255 pounds and really has a lot of pop behind his bat. Even if he went 1-for-20 with a home run, his OPS would be .250.

All it’s going to take is effectively four hits that account for seven bases to get Tebow to a .550 OPS. It’s not exactly a given that he gets there, but at least we think he’s got a better shot to turn on a couple pitches and belt them for extra bases than he does to bat .300 or avoid striking out at least 40 percent of the time.