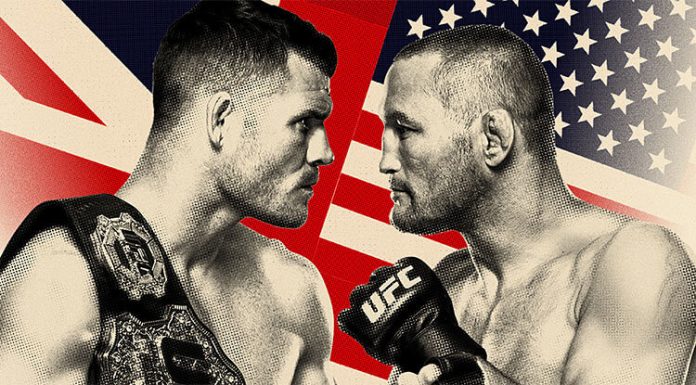 This Saturday’s UFC 204 in Manchester, England presents a grand homecoming for the U.K.’s first-ever champion, Michael Bisping. The middleweight titleholder – coming off one of the year’s biggest upsets – will make his first title defense against Hall-of-Famer Dan Henderson.

This is a money fight, plain and simple, as there are plenty of more deserving contenders, chief among them Ronaldo Souza, Chris Weidman and Luke Rockhold. But you won’t hear any complaints from fans, as the storylines are too juicy to ignore. You can read more about them in a detailed fight preview from earlier this week.

In other action on the fight card, middleweight contenders Vitor Belfort and Gegard Mousasi clash in a matchup of elite middleweight strikers, and knockout artist Jimi Manuwa locks horns with former University of Tennessee defensive lineman Ovince St. Preux in a scrap between ranked light heavyweights.

Instead of trying to overpredict on too many fights, we’ve broken down the card into three great value bets – the cherry picks. We started these UFC picks at UFC Fight Night 95, and we’ll keep you updated on how we do.

All odds courtesy of BookMaker.eu, which lets you bet on MMA odds online.

Time’s Up for Hendo

At 46 years old, Dan Henderson is only four years away from awesome discounts at IHOP. It’s easy to see that he’s just 3-6 in his past nine fights, but it’s how he’s losing that sticks out most. In each of those six defeats, he’s either been dropped, ragdolled, submitted or knocked out cold. Recent years have not been kind to Hendo, and over two decades of pro MMA combat has left him slow and creaky.

Aside from a flash knockout of Hector Lombard, nothing in Henderson’s recent past suggests he has what it takes to hang with elite middleweights anymore. And despite how you feel about Bisping, the current champ has been a perennial contender for years.

Sure, the American might conjure up one last bit of H-Bomb magic in his retirement bout, but considering how bad he’s been losing, do you really want to bet your hard-earned money on a lucky punch?

Bisping to win is a safe bet – you could argue that he should be more expensive. The over/under at 2.5 rounds is too difficult to call in these fight odds, even though Henderson’s past four fights have ended before that mark.

Though Bisping was able to knock out Luke Rockhold, the lack of knockout power is an issue that’s plagued him his entire career. Additionally, don’t be surprised if Bisping chooses to wrestle with Henderson, as the American offers little in the way of takedown defense these days.

Belfort is one of the most dangerous first-round fighters in MMA – his blinding hand speed and early blitzes have claimed plenty of shell-shocked victims. But these days, that’s pretty much all he’s got. It’s not unusual to see Belfort completely exhausted before the end of the first round, and at that point he’s particularly large fish at the bottom of an octagon shaped barrel.

That lack of stamina spells doom against a highly technical, well-conditioned kickboxer like Mousasi. The Dutch-Armenian is an extremely cerebral fighter, and will happily spend entire rounds jabbing away at opponents if that’s what’s working. He’s never in a hurry, so expect “The Dreamcatcher” to probe Belfort’s defense and bait the Brazilian into explosive exchanges to drain his gas tank.

Mousasi is a massive UFC betting favorite for a reason – and taking him to win is a secure bet. But if you really want to gamble with these UFC odds, than consider the over at +100. Though Belfort’s past five fights have ended in the first round, Mousasi is a guy who takes his sweet time.

In This Case, Bigger Is Better

Ovince St. Preux is a massive 205-pounder, standing a massively muscled 6’3”. On top of that, he’s an explosive athlete in all MMA phases – from launching killshot strikes to driving for double leg takedowns. Three inches taller than Manuwa with a larger frame, OSP will be unquestionably the bigger man against his opponent on fight night.

That size will make all the difference against Manuwa, who is a crushing knockout artist with serious deficiencies on the ground. Though OSP isn’t known as an elite wrestler, he’s a decent one at the very least. He can take a clear path to victory by avoiding Manuwa’s boxing altogether and utilizing a punishing brand of ground and pound.

Considering that OSP is by far the more well-rounded fighter, a -165 money line seems like a gift from the oddsmakers. That’s far cheaper than taking Mousasi or Bisping straight up to win, even with the equally likely outcome.