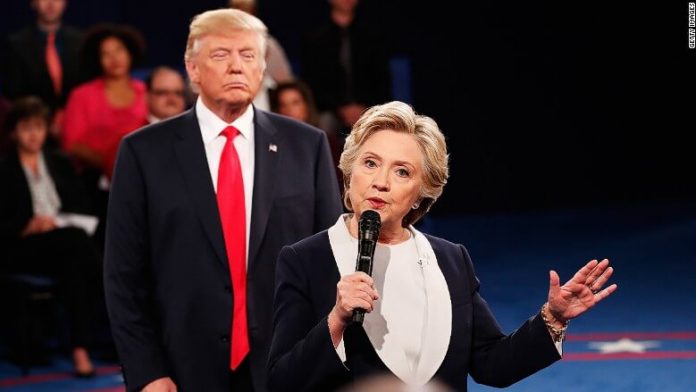 The second presidential debate is now in the books and there are plenty of things to talk about in the aftermath. Was Donald Trump able to save his campaign and stem the tide of Republican Party elites fleeing the ship? Was Hillary Clinton able to take advantage and grab a firm lead? Most importantly, who won the debate?

What did Sunday’s debate performance mean for the political odds for both presidential candidates in next month’s US election?

Initial reaction was somewhat mixed as to who won the debate. Many discredited instant polls had Trump as the winner, but more scientific polls brought out by YouGov and CNN held Clinton as the winner, though not by as much as you might think.

Republicans obviously thought the debate went alright, at least as there were no defections from the party nominee during or after the debate, and VP Mike Pence, who was rumored to be mulling his options over whether or not to stay onboard the campaign, even gave Trump a full vote of confidence immediately afterward.

The odds above have a peculiar metric to determine who won the debate though. Rather than rely on any poll or focus group, BookMaker.eu is using the exchange rate between the dollar and peso to determine who was the winner.

Bookmaker scored Hillary Clinton the winner given the sharp rise in the Mexican Peso versus the US dollar in the day following the debate. There are other things that affect the exchange rate, despite just the US Presidential Election, but it has been a pretty good indicator thus far.

Just a few days before the debate, the conventional wisdom was that Trump would receive a lot of leeway from people and be declared the winner as long as he didn’t commit any major gaffes and was somewhat composed. It’s somewhat of a low bar, but Clinton dominated the first debate by such a wide margin that people were eager to see a race and hopeful to see anything but a runaway.

Then, the video was released. For the first time since his attack on the Khan family, Trump received widespread condemnation and many Republicans decided to withdraw their support from his campaign. It was perhaps the biggest mind-blowing moment in a campaign full of mind-blowing moments, until the day of the debate came.

The debate promised to be full of fireworks, and boy, did it deliver. It started a few hours before the debate was slated to begin with Trump holding an impromptu sit-down with four women who had accused Bill and Hillary Clinton of committing sexual assault or helping to cover up sexual assault.

The whole thing was a spectacle meant to pull attention away from his gaffe and it was one of the lowest moments we had ever seen in politics.

With Trump involved, this was never going to be an ordinary debate, and it didn’t take long to see that. Anderson Cooper gave Trump the question that everyone had been waiting for when he asked him point blank about the video, and Trump’s response was an amazing mess.

He denied the comment, gave a half-apology, rambled on about ISIS and then declared that Hillary and Bill Clinton were far worse abusers of women than he ever was.  It was a tour de force of a response and something that left many people, including his competitor, aghast.

Following this, the night turned into a mud-slinging spectacle, the likes of which we have never seen in American politics. Despite Clinton’s early claims that she was going to rise above the fray, she eventually found Trump’s banter too much and rolled around in the slop with him.

It’s hard to blame Clinton on some level – continued untrue personal attacks would rile almost anyone – but while she kept her composure, she let Trump drag her down and that led to a back-and-forth that most Americans despised. What will the results mean for political betting now?

Keep an eye on poll numbers and presidential odds to see who the bettors are putting their money on to be the next POTUS.