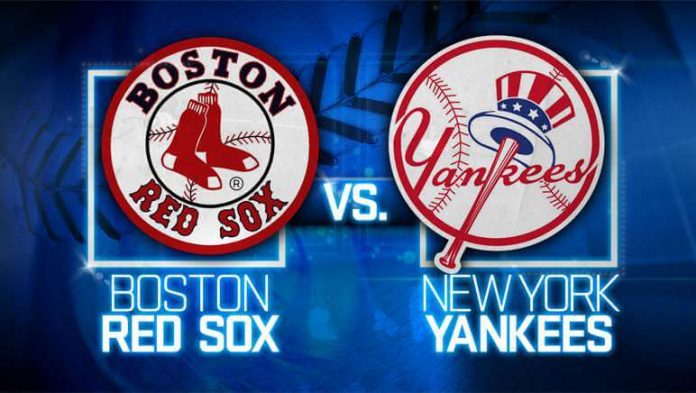 The greatest rivalry in baseball and one of the best in sports resumes when the top teams in the AL East square off in the Bronx on Saturday’s FOX Game of the Week. The Boston Red Sox enter the series with a slim lead over the New York Yankees in the division and the two own the best records in MLB.

There is an added emphasis on winning the division and avoiding the wild card play-in game, which adds even more incentive to win these regular season matchups. We’re only halfway through the season and it might be premature to talk about playoffs. But it doesn’t look like these clubs are going to falter and the rest of the division is struggling. The fireworks from Yankee Stadium get underway at 7:15 p.m. ET.

Just how evenly matched are these teams? Well, they are neck and neck in the standings, they’ve split six games in the previous two series and they can both score a bunch of runs. The Red Sox lead MLB with 5.2 runs per game and they enter the series on a four game winning streak outscoring the opposition 27-9. They’ve plated 52 runs while hitting .331 as a team in winning six of their last seven games.

The Sox also lead the Majors with a .266 average, .790 OPS, and they are second to the Yankees with 118 home runs. Rafael Devers and Jackie Bradley each homered in Thursday’s win over the Angels and they both enjoyed the recent homestand. JBJ hit .471 over the last six games while Devers was at .363. And the Sox send their ace to the hill on Saturday. Chris Sale is 2-0 in his last three starts with 33 strikeouts and a 1.35 ERA over 20 innings.

The Yankees can mash the ball too, but they had troubles on their road trip. They were swept in Tampa and blanked for the second time on the trip in the finale against the Phillies that cost them a split of the six games. They scored 17 runs while batting just .175 and played below the total in five of the six contests. Over their last 10 games the under is 8-2.

Returning to the Bronx could be what the Yanks need to snap out of their funk. They own the best home record in the Majors at 29-11 and they’re hitting .260 with 67 homers in 40 games at Yankee Stadium. They took two of three from the Sox in May when the clubs met in the Bronx and were denied the sweep when J.D. Martinez hit a solo homer off Dellin Betances. That defeat was just the second in 19 games for the Yankees.

Chris Sale ( 7-4, 2.56 ERA ) was dominant in his last start, blanking the Mariners on four hits with 13 strikeouts over seven innings to get the win. Since giving up 10 runs in 10.1 innings in starts against the Braves and Astros that saw his ERA balloon to 3.00, Sale has been filthy in his last four outings. He’s allowed 15 hits with an ERA of 1.28 and 43 strikeouts in 28 innings.

Sale allowed eight hits and one run with eight strikeouts over six innings in a 14-1 over the Yanks on Apr. 10. The lefty is 1-2 with a 2.18 ERA in 41.1 career innings pitched at Yankee Stadium.

The Yankees wouldn’t be in the market for another starter if Sonny Gray ( 5-5, 4.93 ERA ) was pitching well. He’ll look to bounce back from a loss to the Rays in his last outing when he surrendered four runs and six hits in 6.2 innings. He did settle down after allowing three runs in the first two innings, but the bats were silenced.

Gray had his finest outing of the year on June 6 when he blanked the Jays on two hits over eight innings. But since then he’s allowed 10 earned on 19 hits across 16.2 innings in his last three starts. Gray was shaky in his only start against the Sox, allowing six runs and seven hits over three innings in a 6-3 defeat at Fenway Park.

Gray has pitched better this month but he’s still a liability, especially against a scorching hot offense like the Sox have. The pitching matchup favors the Sox with Sale throwing darts against a team that strikes out its share of time. The Yanks have the edge in the bullpen, but they need to get to the late innings with a lead. That’s not going to happen here. The Sox will jump on Gray and Sale will do the rest as the Sox take this matchup of the league’s top two teams.