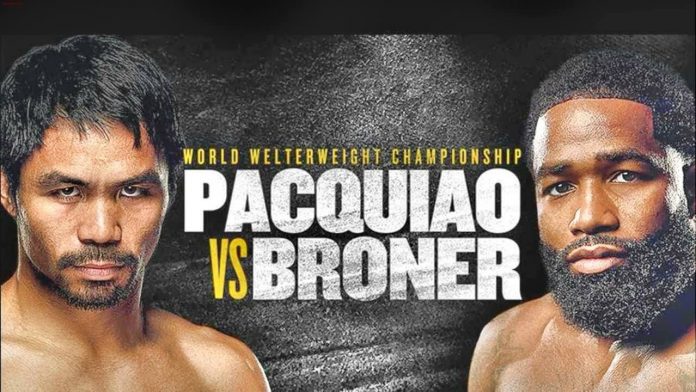 Manny Pacquiao is the WBA welterweight champion once again, even at the age of 40. He will aim to defend the title in a hyped showdown against Adrien Broner this weekend. Broner found a lot of past success in welterweight but this is a tough matchup even as Pacquiao fights in the twilight of his career.

Pacquiao has lost four of his past 10 fights but he faced some pretty good competition in those fights, highlighted by a loss to Floyd Mayweather. Pacquiao has retired and come back in recent years but he looks focused and ready for this matchup. Broner would love to pull the upset but even though he is younger, this is a bout against one of the best boxers in history and will be tough to claim.

This WBA welterweight title fight between Manny Pacquiao and Adrien Broner will be held at MGM Grand Garden Arena in Paradise, Nevada on Saturday, January 19th, 2019 and nationally televised on Showtime Pay-Per-View.

Why You Should Bet Pacquaio

According to Bookmaker.eu, Pacquaio is listed as the -300 favorite to come away with the victory in this bout and retain his welterweight belt. Broner is the +235 underdog.

Pacquaio has a career record of 60-7-2 with 39 wins via knockout. The criticism lately was that he was failing to knock out opponents but Pacquaio got that done in his most recent fight with a seventh-round TKO of Lucas Matthysse on July 15th, 2018 with the welterweight title belt on the line.

Pacquiao is the only eight-division world champion in the history of boxing and he has won the championship belt in the four glamour divisions of flyweight, featherweight, lightweight and welterweight. Pacquiao did not use trainer Freddie Roach in his most fight after they had a disagreement but the two are aligned for this one, which should help his odds.

Why You Should Bet Broner

Broner is looking to pull the upset. He is the much younger fighter at age 29. Broner has a record of 33-3-1 in his career with 24 wins via knockout. However, he does not have nearly the same distinguished career as most of the wins have been against lower-level fighters. Broner held the lightweight and welterweight titles in the past and would love to claim another championship belt.

Broner has been hurling insults Pacquiao’s way as he believes age will slow down the former all-time great. Most boxers hang on way too long, and Pacquiao couldn’t stay away from the ring after he retired a few years ago. However, the oddsmakers believe in his ability to stay competitive as Pacquaio is a solid favorite against a decent foe.

Broner is dealing with a spate of legal trouble, something that has followed him around for much of his career. Broner feels like he has the talent to become a fighter that has the same type of cachet as Pacquaio, and a win against the former star in this one is a prerequisite to taking that jump.

Broner lost to Mikey Garcia and then fought to a majority draw Jessie Vargas last time out, which doesn’t inspire a lot of confidence.

Reason: Pacquiao seems like he would be vulnerable in this matchup due to his age, and Broner has the talent to make this a good fight. However, the 40-year-old Pacquaio will show he still has something left in the tank by knocking off the more undisciplined Broner to retain the welterweight championship belt.

A knockout seems like too much to ask. Take Pacquiao in a fight that does the distance.

Check out the latest boxing odds.