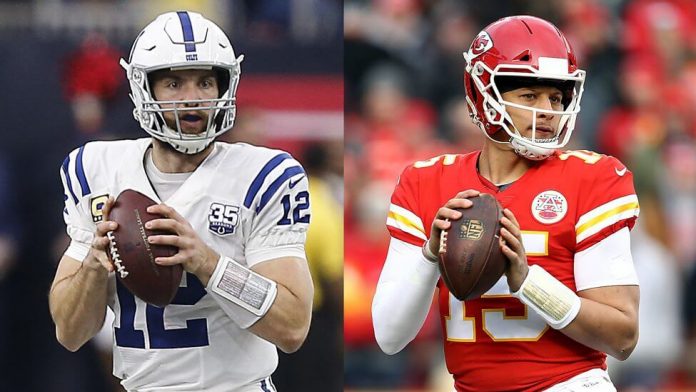 The Indianapolis Colts are one of the hottest teams in the NFL, and they made easy work of the Texans in the AFC Wild Card round. However, the degree of difficulty goes way up on Saturday as they travel to Kansas City to face off against the top-seeded Chiefs in the AFC Divisional Round.

The Chiefs have the most explosive offense in the NFL and are the favorites to emerge from the conference and make it to the Super Bowl. They need a pair of victories to get there, the first of which over the Colts. Indianapolis has found a great formula for success on offense and will aim to keep up.

The Chiefs are at home and have more talent which makes Indy the underdog, but the oddsmakers don’t believe an upset is completely out of the question.

This game between the Indianapolis Colts and Kansas City Chiefs will be held at Arrowhead Stadium in Kansas City, Missouri at 4:35 p.m. ET on Saturday, January 12th, 2019 and televised on NBC.

The Chiefs are currently listed as the 5.5-point favorites in this matchup. Kansas City is -240 on the moneyline while Indianapolis is the +199 underdog to pull off the upset.

The scoring total is listed at 57 points, which is not a surprise. Even though the wild card round was dominated by the defenses, the quarterback matchup in this one is big time and each side has the capacity to put up numbers in bunches.

The Chiefs have lost 3 of their past six games after a red hot start. The defeats came at the hands of the Rams, Chargers and Seahawks and all came down to the wire. The lull can be taken one of two ways: either teams have started to figure out Kansas City or the NFL has parity and the Chiefs were bound to start losing some games.

Kansas City did bounce back with an easy 35-3 win over the Raiders in the regular season finale to clinch the top seed in the AFC. The Chiefs are aiming to show the losses were not a harbinger of things to come by picking up this victory and advancing to the AFC Championship game.

The Chiefs have a pair of key players with injuries. Star safety Eric Berry has been out for most of the season with a heel injury, but was able to practice in a limited capacity on Tuesday. Keep a close eye on his status. The Chiefs’ weakness is their defense and a healthy Berry would be a big boost.

Wide receiver Sammy Watkins is dealing with a foot injury that forced him to miss six games on the year. The Chiefs have Tyreek Hill and Travis Kelce as a pair of elite skill players, but Watkins’ presence makes it nearly impossible for opponents to shut them down.

The Colts had a handful of players who were limited early in the week but are mostly healthy. They are hoping safety Mike Mitchell will be available to slow down Patrick Mahomes and the elite Kansas City passing game.

Indianapolis is riding high after a big win, and the offense behind star quarterback Andrew Luck is really humming. The Colts should put up points, but the Chiefs will put up more. Look for Kansas City’s passing game to dominate the Indianapolis defense in this one.

The scoring total is high but the “over” is the choice. The Colts will get a late score to cover the spread in what should be an entertaining affair.