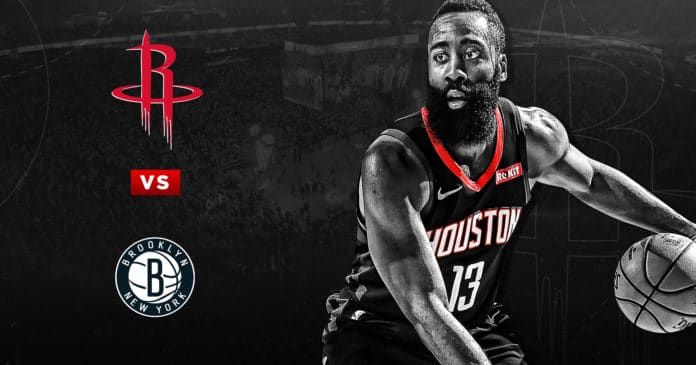 The Brooklyn Nets are heading into NBA All-Star week with the best record in the Eastern Conference – tied with division rival Philadelphia 76ers. Steve Nash has yet to have all three of his superstars on the hardwood for more than a few minutes.

Brooklyn just had their eight-game win streak snapped at home by the Dallas Mavericks, and will look to close the first half of its season out on a high note. James Harden could be in line for a huge showing with him returning to the Toyota Center to battle his former teammates for the first time since complaining his way out of Houston six weeks ago. Bookmakers will be big Houston Rockets fans with the team looking to possibly put an end to a 12-game losing streak (1-9 ATS).

This East versus West battle is set for Wednesday, March 3, 2021 at 7:30 p.m. ET from the Toyota Center. The game will be broadcast on ESPN.

Even without “The Beard”, the Rockets did a good job for NBA bettors initially logging four wins and point spread covers in the first five games played without Harden. Since then, the team has gone on to lose each of its last 10 games and only managed a single point spread cover during that stretch. With games still slated to go on Sunday and Monday against the Grizzlies and Cavaliers, it’s possible the Rockets will be staring at a 12-game losing streak heading into this matchup with the Nets.

As for Brooklyn, it just saw its eight-game SU and ATS win streak get snapped at home after dropping a 115-98 decision to Dallas on Saturday night. It was an off night all around for the current Atlantic Division leaders. Overall, the Nets have gone 9-7 SU and 8-8 ATS away from the Barclays Center, while the Rockets counter with 5-7 SU and 3-9 ATS tallies when playing on their home hardwood.

After a tough five-game road trip at Golden State, Sacramento, Phoenix and both teams from Los Angeles, Brooklyn ran out of gas in the team’s home finale against the Mavericks on Saturday night. The Mavs took charge of the game early by taking a 38-26 lead into the second quarter, but the Nets battled back to make a game of it trailing 68-64 at the break. Much to the chagrin of over bettors, Brooklyn simply just ran out of steam combining for 34 second half points to ultimately fall by a 115-98 count as 1-point home dogs. The 213 combined points didn’t even sniff the 233.5-point closing total. Harden led the way with 29 points, but they were no match for the Mavs who didn’t have to deal with Kyrie Irving or Kevin Durant.

The Rockets extended their losing streak to 10 straight last time out when they lost 122-111 to the Toronto Raptors as 6.5 point underdogs. Houston actually took a 31-30 lead with it into the second quarter, but then proceeded to get outscored 92-80 the rest of the way to end up in the loser’s column once again. John Wall and Victor Oladipo each shined with the duo combining for 48 points, 16 assists and 7 rebounds, but they got next to nothing from everybody else save for 17 points from Eric Gordon. The tilt with the Nets will be the finale of a three-game homestand where the team sports ugly straight up (SU) and against the spread (ATS) records for the season. In fact, Houston has failed to cover each of the last four times it played in front of its own cardboard cutouts.

Best Bet: Rockets and the UNDER

Houston has the worst rebound rate in the NBA. They also rank 26 in offensive efficiency but counters that weak output with a defense that ranks 6 overall in allowing 106.5 points per 100 possessions as well as a 45.9 field goal percentage allowed (ranked 9th). With that, the total has gone 12-18-1 to the under in their 31 played games heading into the week. Even with Durant already expected to miss, linemakers are going to hang an inflated number to beat with the Nets regardless of whether Kyrie joins Harden on the hardwood or not. Bookmakers simply haven’t been able to get a handle on Brooklyn totals this season. Whatever they set, it goes over. With that, negative regression is bound to hit and this looks like as good a spot as any for the ship to start getting righted. Don’t fall for the trap. Don’t lay the exorbitant chalk in Harden’s revenge game and don’t look for the scoreboard to get dented! Hit the under as well as the Rockets plus the points if you can’t read between the lines.