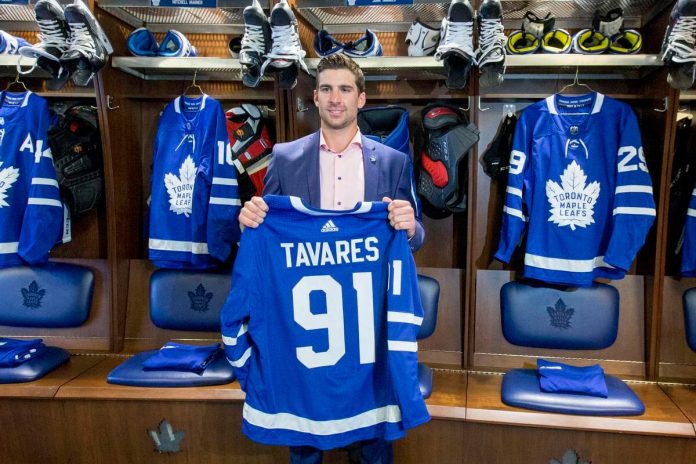 The Toronto Maple Leafs landed the most coveted NHL free agent this summer when they signed John Tavares to a seven-year $77 million dollar contract on July 1st. The Maple Leafs have built their franchise almost from scratch over the past five or six seasons, and now they are coming out of that stage and beginning to compete for divisional titles, and hopefully for them, Stanley Cups.

The Leafs have a solid team, but they either needed to add one huge piece to the puzzle, or a few small pieces to complete the puzzle. What they have done is added the biggest piece they could find, and now it falls on the shoulders of John Tavares to bring a Stanley Cup to his hometown. When Tavares signed with the Leafs, one thing he went out of his way to mention was the ties he has to the area. He posted a photo on Twitter sleeping in a bed with Maple Leafs bedding on, showing that he has been involved with the club since being a little child. That little child is now the final piece of the puzzle in what fans hope will be a number of Stanley Cup runs over the next few years.

The one trend we have seen from top NHL teams over the past four or five seasons has been strength down the middle of the ice. You could argue that with the addition of Tavares, Toronto now have the best group of centers for the top nine in the entire NHL. Auston Matthews is going to lead this franchise for years, and with him playing in their number-one center role, they have one of the best players in the league. Behind him, Tavares is the best number-two center man in the league for many people, while Nazem Kadri stands up to anyone as a number-three center, and a great luxury player for the Leafs.

It is the strength they have down the center of the ice that will make the difference in years to come. With solid goaltending, wingers who can score and a defense that is competent, the Leafs are in a very good position. They are as short as +700 favorites to lift the Stanley Cup this season in the latest NHL betting, and that price was immediately lowered as soon as the Tavares news broke. He is a vitally important piece and makes Toronto a far better team, so it was no surprise to see that move from the bookmakers.

Whether it is next season or three years down the line, there is no doubt that adding John Tavares has moved Toronto closer to winning a Stanley Cup. They have found their missing piece, the biggest piece they could possibly sign on July 1st, and he looks like he will be a great fit for them. He is a hometown boy who loves the club, and would love nothing more than to play a part in bringing a cup home during his stay.