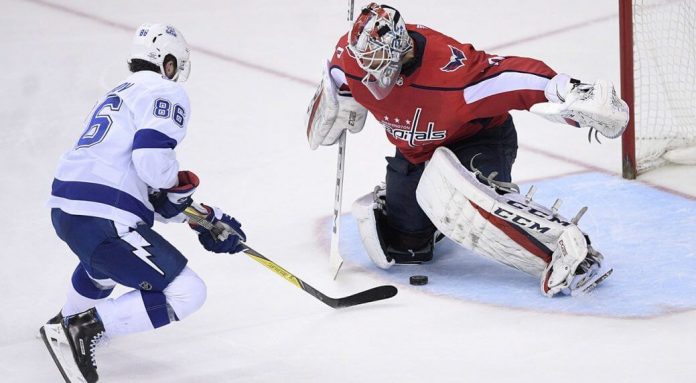 The Tampa Bay Lightning would like to forego their return to Florida and remain in our nation’s capital for Game 5 of their Eastern Conference Final with Washington. Why? Because the home team has yet to win a game in the series. The Lightning evened things with the Caps at 2-2 by taking the last two on the road. Just a few days ago a return trip to the Stanley Cup Final looked bleak for the Lightning after they were outscored 10-4 in losing the first two games. Game 5 will take place in Tampa on Saturday night.

Playing on the road hasn’t affected the Caps, who are 7-1 away from home this postseason. That’s both good and bad. They have proven to be a tough out on the road, but that likely has to change at some point. And Tampa is hoping that time is Saturday. Out west the magical run of the Vegas Golden Knights continues. After losing Game 1 of the Western Conference Final, Vegas responded by taking the next two to inch closer to a trip to the Stanley Cup Final.

It’s hard to say what team has the edge in this matchup. The Caps are the best road team during the Stanley Cup playoffs, posting a mark of 7-1 while outscoring opponents 30-17. However, they blew a golden opportunity to seize control of the series by failing to win a game on home ice. And that puts the pressure squarely on their shoulders with at least one more road victory needed to win the series against the team that had the second-best home ice ledger during the regular season. Their inability to convert on the power play hurt the last two games. The Caps had converted at least once in 12 of their first 14 games, but they were a combined 0 of 7 with the man advantage in the last two outings.

Showing why they were the top team in the Eastern Conference, Tampa responded with a pair of road victories to even the series. Now they have home ice advantage in what is now a best-of-three series. There were some concerns about netminder Andrei Vasilevskiy after he allowed 10 goals in the first two games of the series. But he responded in Games 3 and 4 by stopping 36 shots and allowing two goals in each. And they needed him to be large with the Caps owning a 76-43 advantage in shots on goal in the two matchups.

4 – Steven Stamkos is a sniper and he’s heating up at the right time for the Lightning. A former 60-goal scorer in the National, Stamkos had a down year by his standards netting 27 during the regular season. And he had a slow start to the postseason with only three goals in the first two series. But Stamkos has found the back of the net in each of the first four games against the Caps with a pair of assists for six points. Going back to the Boston series he’s scored in six of the last seven games and has at least one point in every outing.

At some point the home team has to win a game and it’s hard to imagine the Lightning dropping another on home ice. The Caps are playing with fire and their failure to win at least one of the last two at home puts them in a tough spot. Sure, they’ve been good on the road, but having to rely on road victories isn’t going to cut in the Stanley Cup Playoffs. Vasilevskiy stood on his head in Washington and he’s heating up along with Stamkos to get Tampa closer to a finals return.