Home Latest News We Need to Talk About Cody Garbrandt vs T.J. Dillashaw 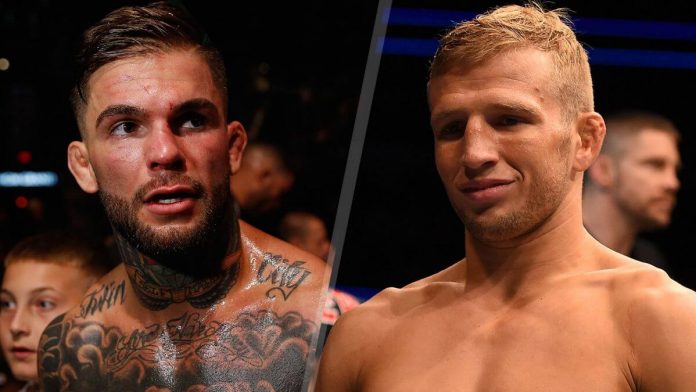 Sign me up for the Cody Garbrandt/Team Alpha Male Revenge Tour. In fact, watching the hot-headed champ settle all of his team’s beefs is probably the best thing that could happen to a 135-pound class that’s had trouble drumming up casual fan interest.

Why? Because “No Love” pretty much acts like the stereotypical gym bro picking bar fights with anyone who looks at him funny. It was too easy for Team Alpha Male nemesis Dominick Cruz to rile him up during interviews to the point where Garbrandt was could only resort to “hold my beer, I’m coming over there to kick your ass right now” and the generic “I’m going to break your jaw, bitch.”

Now, he’s going after Team Alpha Male “traitor” T.J. Dillashaw. The same guy that won the belt with the Sactown camp, left for Team Elevation, then engaged in a messy public breakup with captain Urijah Faber that had more drama than a Kardashian divorce.

Faber is Garbrandt’s boy. And according to bro code, you do not mess with somebody’s boy without consequences. Dillashaw is already going after them both, recently announcing them he made Garbrandt “cry multiple times after practice.”

Now, they’re serving as opposing coaches on the next season of The Ultimate Fighter. And even though T.J. is one of the worst trash talkers in the sport, I’d set the over/under on how many times Garbrandt needs to be held back at five and take the over all day. Expect entire conversations to be bleeped out, because this is Garbrandt we’re talking about.

All beef aside, this is just an awesome fight. Garbrandt scored one of 2016’s biggest upsets over Cruz, raising his game to a level that nearly everybody thought would take years for him to reach. It was a shock to watch him go from fighting mid-level guys like Takeya Mizugaki to schooling the greatest bantamweight in UFC history.

Now he’s got to face a guy that many thought had actually beaten Cruz. And while many feel that Dillashaw just imitates the former champ’s style, there are major differences to consider. Yes, T.J.’s footwork and constant movement is reminiscent of “The Dominator’s” trademark style. But Dillashaw is a far more fluid offensive wrestler.

The thing is Garbrandt is an underrated wrestler himself, especially when it comes to the defensive sprawl. His elite athleticism and quickness doomed Cruz, but T.J. is a better athlete. Both can easily go five rounds – cardio isn’t an issue for either man.

So Who Has the Edge in Fight Picks?

What I’m trying to say is that right now, this fight seems dead even. When oddsmakers release UFC betting lines at BookMaker.eu, I’d expect them to be close to a tossup. Garbrandt’s most recent performance gives him a slight edge, but T.J. Dillashaw’s odds have looked awesome since his contentious loss to Cruz.

For now, we give the Cody Garbrandt odds the edge, but this is an opinion that could easily change in the coming weeks. Make sure to stay tuned for detailed fight previews and the latest trash talk, because there’s sure to be a ton from all of Team Alpha Male, Team Elevation, Garbrandt and Dillashaw. This is gonna be a lot of fun.

Check out the latest MMA fight odds on our MMA/UFC odds comparison page.