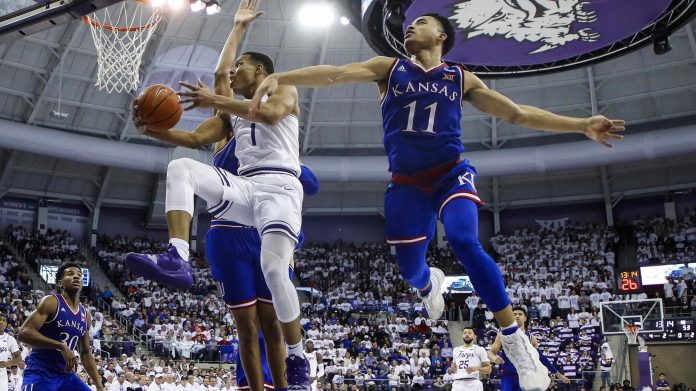 We could see some big changes in the Top 25 on Monday due to what takes place on Saturday. Multiple Top 25 teams will be facing difficult challenges, and there will be two games between ranked opponents early in the afternoon. At noon, LSU and Auburn will face off in east Alabama, and Big East powers Seton Hall and Villanova will hit the court at 2:30 p.m. We’ll find out something about all four teams as the end to the regular season draws near.

Although the Jayhawks have lost three times this season, Kansas is the best team in the country according to Ken Pomeroy. Pomeroy’s ratings make Kansas a two-point favorite over any other team in the nation on a neutral court, and the rigors of the Big 12 schedule should help them tremendously in March Madness.

Kansas has won its last seven games after falling at home to Baylor four weeks ago. Udoka Azubuike is a game changer with his size, and the Jayhawks have excellent guards that can create, led by Devon Dotson. TCU has taken a step back this season, and this defense is not as solid as we are used to seeing from a Jamie Dixon squad.

Both these teams have been given the benefit of the doubt in the rankings despite awful non-conference slates that failed to show us much about the caliber of these squads. Auburn will likely be a moderate favorite in this game due to both home court advantage and public perception after last year’s trip to the Final Four, but LSU has a decent chance of pulling off the upset. The Bayou Bengals have one of the best offenses in the nation, ranking sixth in that category, and they will test an Auburn defense looking to prove something.

No. 16 Michigan State at Michigan

The Wolverines are 13-9, but they are still receiving plenty of love from the pundits. They are rated one of the top 35 teams in the nation on both sides of the ball by Pomeroy, and this team is excellent at defending the perimeter and forcing turnovers. However, they have a losing record over the last two months of this campaign. All of those loses came to teams ranked No. 32 or below according to Pomeroy’s rankings, but thy need to start winning to ensure a spot in March Madness.

Michigan State has been somewhat disappointing after starting the season as the No. 1 team in the land. The Spartans have lost seven times this year, and they have had some issues in Big Ten action. This team has lost four of its last seven games entering Saturday’s clash with its arch-rival, and a loss in Ann Arbor to Michigan might lead to Tom Izzo pushing the panic button.

Big East supremacy will be on the line when the Pirates travel to Philadelphia to take on the Wildcats. Seton Hall’s sudden rise after a 6-4 record through its first 10 games has been noteworthy, and that has fans dreaming of a miracle NCAA Tournament run in March. However, Jay Wright has claimed two of the last four national championships at Nova, so he knows what it takes to consistently win at this level. He has an excellent team this year, and Siddiq Bey and Collin Gillespie are two of the best weapons in the conference.

No. 7 Duke at North Carolina

It’s been a dreadful year for North Carolina. The Tar Heels are almost certain to miss the NCAA Tournament with a 10-12 record through 22 games, and they are just 3-8 in conference play. That record is likely to get worse when Duke makes the trek to Chapel Hill this Saturday. Duke has reloaded and is the current favorite to win it all per the college basketball betting odds.

These two teams have been the best in the West Coast Conference for over a decade now. St. Mary’s has somewhat fallen off despite a 20-5 record this year, but Gonzaga is as strong as ever. The Bulldogs are the No. 2 team in the country with just one loss against them and victories over Texas A&M, Washington, Arizona, Oregon, and others in non-conference play.