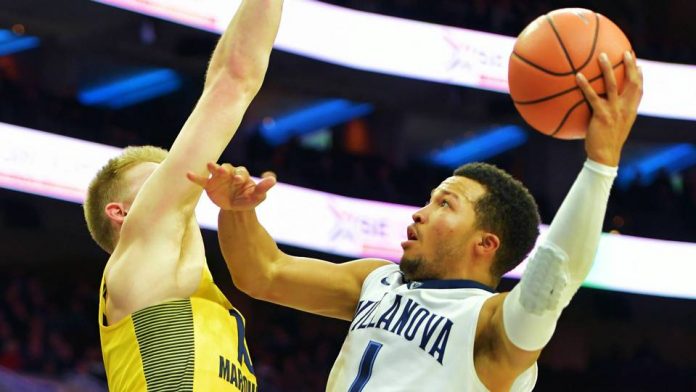 The Villanova Wildcats entered their first meeting with Marquette two weeks ago undefeated in Big East play and two games better than the Golden Eagles in the standings. The teams have gone in opposite directions since then. Marquette beat the Cats to close the gap starting a run of four straight victories. Meanwhile, the defending national champions have dropped three straight league games for the first time since the Big East was reorganized and four of five overall to relinquish its lead and fall from the top-25.

It’s a two-team race at the top of the league standings and Marquette can clinch the regular season title by sweeping Nova. Expect the Cats to put up a fight, though, as they need to right the ship with the season coming to a close.

It’s been a great season for the Golden Eagles, who enter the contest ranked No. 10 in the country with a 23-4 overall record and 12-2 in Big East play. They’ve lost just once in their last 13 games and that was by a single point on a buzzer-beater from St. John’s Shamorie Ponds. In fact their only two losses since late November have come against the Johnnies. In that span they’ve knocked off four ranked opponents.

This is unchartered territory for Jay Wright and his Wildcats. They hadn’t lost two Big East games in row since the league was reshaped in 2013, now they have a three-game skid while surrendering first-place by losing four of five overall. All four of the losses came on the road, including a stunner to St. John’s at Madison Square Garden when the Cats squandered a 14-point lead with 12 minutes left in the second half.

Markus Howard came up large for the Golden Eagles, and so did their defense. Buoyed by 38 points from the Big East’s leading scorer, Marquette handed Villanova its first league loss of the season after 10 straight wins. Howard, who hit 13 of 24 shots and 5 of 11 threes, accounted for over 57 percent of the offense. But it was the defensive play of Sacar Anim and Ed Morrow that secured the victory.

Clinging to a one-point lead, the Marquette defenders denied Phil Booth a lane to the basket, forcing him to pass to teammate Jermaine Samuels, who missed an off-balance jumper at the horn. Nova had come back from an 11-point second half deficit to take the lead with about six minutes left, but they couldn’t hold on.

Howard is Player To Watch

With the way the season has unfolded it’s safe to say Howard is the Big East player of the year. He leads the conference and ranks No. 5 nationally with 25.3 points per game and he accounted for nearly 58 percent of Marquette’s points in the earlier win over Nova. He’s reached the 30-point mark in eight games and set a Big East record with 53 points in an overtime win over Creighton last month.

Howard had a rare off-night last time out with only 14 points in a win over Providence hitting just 2 of 12 from the floor. And he’s followed low scoring games with outbursts all season. He tallied 37 points against Bethune-Cookman after scoring 15 the previous game. He scored 17 against St. John’s earlier this month and dropped 38 on Nova the next game.

Our Marquette vs Villanova Pick

Our pick: Villanova moneyline at -215 odds

A return home is just what the Wildcats need to break the spell they’re under. Uncharacteristic lapses cost them during the slide and I expect the senior leadership of Booth and Eric Paschall to take over. Besides, the Cats have payback on their minds after a loss to Marquette started this whole mess. Nova will have to contain Howard, who could go off at a moment’s notice. The key is limiting the league’s top-scorer since the Golden Eagles don’t have a lot of secondary production. But that’s not easy to do. The Cats were close last time and with the home court edge, they should snap their losing streak.