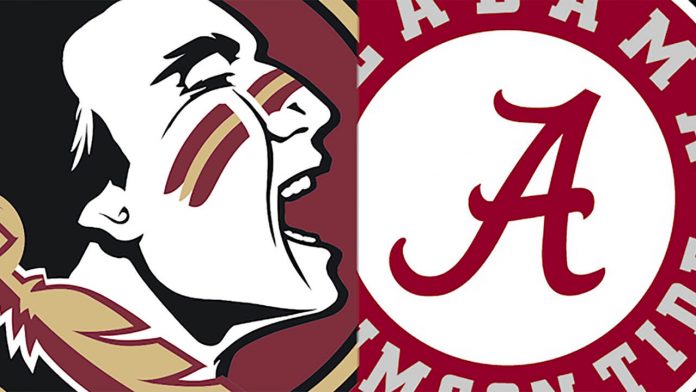 How much better does it really get than starting off the year with arguably a preview of the National Championship Game? The Alabama Crimson Tide have been in the College Football Playoff in each of the last three seasons, while the winner of the ACC Atlantic Division has gone on to play for the title in four straight years. The Florida State Seminoles are the favorite to do just that in 2017 and get back in front of a Clemson team that is coming off of a National Championship season.

The Case for Alabama

It’s incredibly hard to go against Alabama in virtually any situation at this point. Nick Saban has built up the dynasty of all dynasties in a day and age where scholarship limitations should have made that impossible, and he did so in a conference that theoretically is as good as it gets in America.

It almost doesn’t matter how many players Saban goes ahead and sends off to the NFL on an annual basis; there’s a whole new crop of kids set for stardom right behind them.

The Case for Florida State

But this Florida State team might be very, very different. The Seminoles had one of the most unheralded defenses in America last season, and virtually the whole unit is back. Derwin James is the top defender in the land in terms of the Heisman Trophy odds, and he figures to be FSU’s next edition of Jalen Ramsey, the man who almost single-handedly won the Noles the National Championship four years ago.

Even though Dalvin Cook is gone, Jimbo Fisher has a stable of running backs he knows he can count on, led by Jacques Patrick and Cam Akers, both of whom will have a shot to be 1,000-yard backs this year. The offensive line is young, and that could pose a problem against Alabama and its aggressive 3-4 defense to kick off the season.

But are those problems at offensive line really worth 7.5 points to the Seminoles? We tend to doubt it.

If this game really does come down to quarterback play, it’s hard to say that Alabama has the advantage. Sure, the stats on Jalen Hurts suggest that he had a fantastic freshman season. But there were far too many times where he tried to stick the ball in a place he never should have against good defenses, and he was bitten time and time again to the tune of nine interceptions.

Deondre Francois isn’t necessarily a legitimate Heisman Trophy contender as of yet, but he did throw for 3,350 yards and 20 touchdowns in his first year under center. Francois is a tough son of a gun, and he’s going to hang in there this whole game no matter how many times he gets knocked down.

Francois generated big comebacks against Ole Miss, North Carolina, Miami, Clemson and N.C. State last season, but it was his game against Michigan in the Orange Bowl that really stood out. On a day where Francois was battered, beaten and bruised, he threw for 222 yards and two touchdowns, including coming up with the drive of his career to win the game. It was almost Jameis Winston-esque against Auburn, and Nyqwan Murray’s 12-yard touchdown had that same sort of feel as the Kelvin Benjamin touchdown that beat Auburn in the National Championship Game.

Can these Seminoles pull off another big win and take out Alabama? We’re not ready to go quite that far. But 7.5 points in a game like this one shouldn’t be ignored.