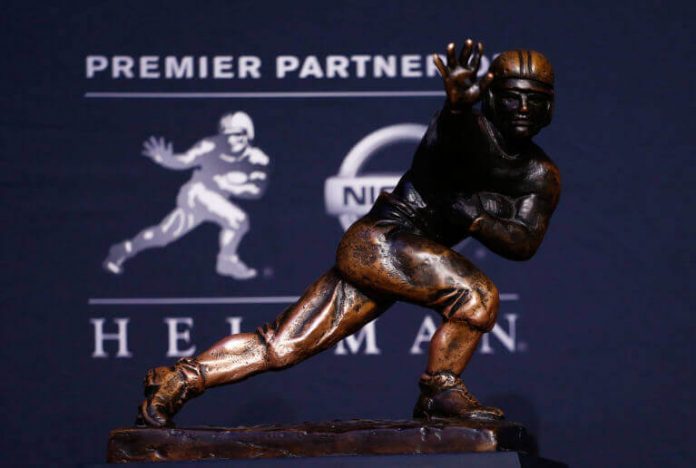 The Heisman Trophy race takes twists and turns every season in college football, and more often than not, the men who were the overwhelming favorites at the start of the year end up dropping off as the campaign rolls along. That means there’s great value for us in taking a look at college football futures right out of the blocks with our early 2016 Heisman Trophy picks.

A Look at the Heisman Trophy Favorites

It’s going to be really hard to discount the two top favorites to win the Heisman Trophy this year. Deshaun Watson is quarterbacking what will surely be one of the top teams in the country, and he had a magnificent performance against Alabama in the title game to prove that he can indeed play well against the top defenses in America.

Leonard Fournette looked to be running away with the award in October last year before he ran into Alabama, and his season effectively hit a brick wall from that point forward. Still, you’d have to look hard to find any holes in either man’s game, and barring injuries, both should be headed to New York as Heisman Trophy finalists.

The man we’re down on is Christian McCaffrey. We know that Stanford is going to be good again this year, but McCaffrey has a new offensive line in front of him. There’s also a point that the tread starts to wear on the tires. Rushing for more than 2,000 yards isn’t likely again this season.

We are high on Baker Mayfield and Dalvin Cook, though. Mayfield is quarterbacking an Oklahoma team which has a hard enough schedule to get into the College Football Playoff with a loss, but not such a hard schedule that it should trip more than once. Mayfield has the potential for 5,000 yards and 50 TDs in that OU offense, and a price of 11 to 1 can’t be missed.

Cook battled injuries all year last year for the Seminoles and still rushed for 1,691 yards and 19 scores. The quarterback play in Tallahassee leaves a lot to be desired, and that should see the ball end up in Cook’s hands a ton this season if he can stay healthy.

Remember that Cook is getting back four of his five starters from an elite offensive line a year ago, and he legitimately might average better than seven yards per carry for a second straight season. That’s tough to ignore on a team that should again win 10+ games in this year’s college football odds.

But our dark horse pick is another man from the state of Florida, Brad Kaaya.

The price on Kaaya is fantastic at 40 to 1, and he we think he could be in for a special junior season under Mark Richt. He’s thrown 42 TDs against 17 picks in his career, and he’s had a pair of 3,000-yard seasons. Richt promises to let Kaaya chuck it down the field more this year than ever before, and that should really benefit him statistically.

The Hurricanes might still be a year away, but if they can compete through October, their schedule loosens up a ton at the end of the year. Kaaya could throw for 4,000+ yards and 40 scores this year, and though that might not quite be enough for his Heisman odds, it should at least keep him in the discussion heading into November.

You never know. If Miami wins the ACC Coastal Division and pulls off an upset of Florida State or Clemson behind a 400-yard game from Kaaya, that might be enough to earn him the Heisman.

The Heisman Trophy award is more of a glorified beauty pageant for the best player on the best team, instead of the best player in college football, but that doesn’t mean bettors don’t love to gamble on the winner. It will be a season-long race full of high and lows for these Heisman candidates in the college football odds. Good luck with the horse you pick.