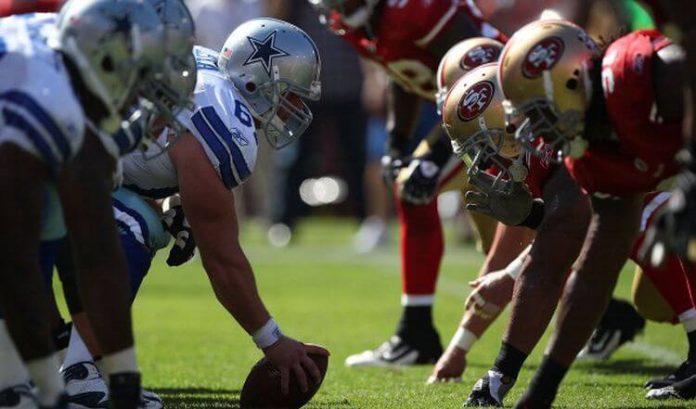 There hasn’t been this much excitement surrounding the San Francisco 49ers since Colin Kaepernick was quarterbacking the club. The Niners ended last season with only six victories, but five of them came in the last five weeks behind Jimmy Garoppolo. Acquired in a midseason trade with the Patriots, Jimmy G will enter a season as the starter for the first time, and he’s also one of the richest men in the Bay Area after signing a mega-bucks deal in the offseason.

Garoppolo got most of his snaps during the preseason as Tom Brady’s backup in New England, now he’s the one holding the clipboard. We might see him get a series of action, but that would be it with the team investing so much in him and very little backing him up. The Dallas Cowboys will look to end a 10-game preseason road losing streak when they visit Levi’s Stadium for a Thursday night tilt on NFL Network.

We typically don’t see starters play more than a series if they play at all during the first preseason game. And that’s a shame in this one with players down the depth chart not nearly as well known as the starters. The Cowboys are looking to rebound from missing the postseason last year and the offense will look a whole lot different.

Dak Prescott and Ezekiel Elliott will be around once the bell rings, but we probably won’t see them on Thursday night. We won’t see any of Dez Bryant and Jason Witten, as they are no longer with the team. And that’s a problem for Dallas’ passing game. The two combined for 1,683 receptions, 19,907 and 141 touchdowns and the Boys are looking for answers.

The Niners are banking on Garoppolo lasting the entire season because they have no backup plan. So it’s doubtful Kyle Shanahan puts his QB in a risky situation, and playing in the first preseason game would qualify as a risky situation. Instead we are likely to get a lot of C.J. Beathard, which certainly drops the interest level in this game. Bobby’s grandson proved he couldn’t handle the starting role last season, so maybe he’s better suited for the backup job. The Niners hope so because they have a couple of unknowns taking reps for the No. 3 job.

The Cowboys have been just as inconsistent during the preseason under Jason Garrett as they’ve been during the regular season. They’ve experienced just one losing season in Garrett’s seven full years, but they’ve won more than nine games just twice. Garrett is 12-17 in exhibition games, but he’s lost 10 straight on the road going 2-8 ATS in those contests.

The departure of Bryant and Witten opened up a huge competition among the numerous pass catchers in camp, and it’s a battle that will likely last the entire preseason. Bryant led the team in receptions three times, including last season, and ended his Dallas career with 531 catches. He was a true No. 1 target that the team is now lacking.

Allen Hurns was inked as a free agent and he’s the only player among the group that has amassed a 1,000-yard season, that coming three years ago in Jacksonville. Cole Beasley and Terrance Williams are holdovers from last year, and Tavon Austin and third-round draft pick Michael Gallup will get an extended look during the preseason. Noah Brown, Lance Lenoir and Deonte Thompson are also in the mix, as are several rookies. The competition will be fierce.

The backup quarterback position on both sides is shaky, and with Prescott and Garoppolo playing sparingly, if at all, it makes me wonder where the points are going to come from. We’re going to give the Niners the edge because they are playing at home and because the Boys have been dreadful on the road during the preseason over the last few years. In fact they haven’t won a preseason road game since 2012.

Early preseason games are about exciting as watching paint dry, and this one definitely fits the bill. Outside of the Cowboys’ receivers, there are no position battles to watch. And that one probably won’t be decided with no one to throw the ball. I’d stay away from a wager on the spread, but the under looks promising.