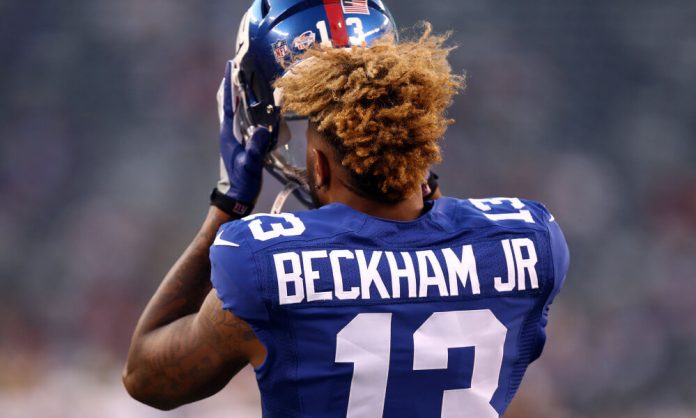 Steelers’ Antonio Brown had the most receiving yards in the NFL last season and oddsmakers like him to repeat. Brown is in the prime of his career and is back with star quarterback Ben Roethlisberger, with whom he has built an incredible chemistry. Roethlisberger knows exactly where to look when he is in trouble and Brown is fantastic at both getting open and making unreal catches.

Falcons’ star Julio Jones was unhappy with his contract this offseason but got that worked out and is now ready to return to his dominant ways. Jones finished second in receiving yards a season ago and is always in the mix with Brown among the NFL’s best wide receivers.

The wide receiver with the third-best odds is DeAndre Hopkins, who is a superstar with the Texans. He developed a great chemistry with Deshaun Watson in Houston a season ago before Watson went down with a torn ACL. If the duo can build on that success Hopkins should be in for a monster year.

Giants wide receiver Odell Beckham, Jr. missed most of last season with a broken ankle. He is healthy now and one of the game’s most explosive pass-catchers, which is why he is among the favorites as well. Other standout receivers near the top of the list for most receiving yards in 2018 include Keenan Allen, A.J. Green, Adam Thielen, Amari Cooper, Michael Thomas and Mike Evans.

It will be interesting to see how the presence of a pair of wide receivers affect Brown and Jones during the 2018 season. Steelers wide receiver JuJu Smith Schuster came on strong last season and is expected to have a larger role this year. There are still plenty of targets for Brown to gobble up, but in the race for the most receiving yards in the NFL, any downtick could be troublesome. Jones gets rookie Calvin Ridley next to him in Atlanta. The first-round pick is a polished player coming out of Alabama and it will be interesting to see if he can make a big impact right away and lessen Jones’ production.

While Brown and Jones are still fine choices, it makes more sense to choose a wide receiver with longer odds because it’s possible someone goes up and takes the yardage title from those two stars.

Beckham is an interesting choice at good value. The Giants drafted running back Saquon Barkley, and while the team could be more balanced, it could actually help Beckham because defenses will have to play more honest against the run and not put all of their attention on him.

Evans won’t have quarterback Jameis Winston throwing him the ball for the first three games of the season due to suspension, but Ryan Fitzpatrick is a decent backup and should be able to get him the ball regularly. Tampa Bay is in a tough division and could lose a lot of games, but being down late means plenty of reason to throw, which could inflate Evans’ yardage total.

An interesting longshot is Josh Gordon, who may be the most talented wide receiver in the NFL but is so hard to count on because of his substance abuse issues. If Gordon is guaranteed to be on the field for 16 games he would be a worthy flier, but he has yet to report to training camp with the Browns and is not reliable enough to wager on.

Between his raw ability and solid odds, the best choice on the list is Beckham, Jr., who is going to be plenty motivated to put up huge numbers and is playing for a team that knows it must get him the ball as often as possible in order to have success.