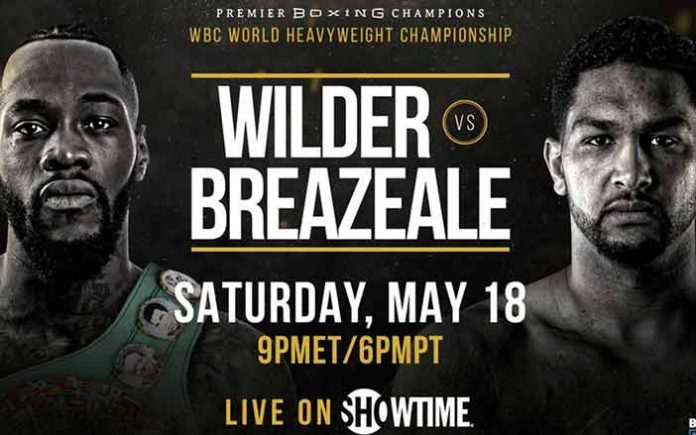 Deontay Wilder was in a spot he had never been last time out, failing to win a boxing match when the decision was announced. Luckily, the fight against Tyson Fury wasn’t a loss but instead ended as a draw, which allowed Wilder to retain his WBC heavyweight title. Wilder will put it back on the line and look to remain undefeated on Saturday in a matchup against Dominic Breazeale.

Wilder got away from his strengths against Fury and rushed his punches. Despite knocking his opponent down twice the judges ruled the fight a draw on split decision and now Wilder will have plenty of motivation to dominate in this one in order to regain his status as a dominant heavyweight.

Breazeale has a pretty good resume but will still be a sizable underdog in this one. It would be an impressive upset if he manages to pull it off. Wilder has been listed as the -875 favorite to come away with the victory in this matchup, while Breazeale comes in as the +575 underdog. The over/under for number of rounds this bout lasts is set at 9.5, with the “under” the heavy favorite at -265 and the “over” being wagered on at +210.

Wilder has a career record of 40-0-1 with a crazy 39 of his victories coming via knockout. While Wilder didn’t consistently dominate Fury in their title bout last December, he did send him to the canvas twice. Wilder was never able to get the knockout blow and the judges deemed the fight a draw, which made sense considering Fury landed more of his punches.

Wilder first claimed the WBC heavyweight title bout in January of 2015 with a unanimous decision over Bermane Stiverne. He really impressed after that, with knockout wins over Eric Molina, Johann Duhaupas, Artur Szpilka, Chris Arreola, Gerald Washington, Stiverne again, and Luis Ortiz before the draw against Fury last time out. Wilder will no doubt be looking for the knockout once again in this title fight.

Breazeale is 20-1 in his career with 18 of those wins coming via knockout. The only loss of his career came to Anthony Joshua, the other fighter who is seen on par with Wilder in the heavyweight division. That loss for Breazeale came via seventh-round TKO on June 25th, 2016 with the IBF heavyweight title on the line.

Breazeale bounced back with knockouts of Izu Ugonoh, Eric Molina and Carlos Negron to set up this championship fight and will aim for better results against Wilder. Breazeale was on the undercard of Wilder’s title fight against Stiverne last time out and now gets a shot at the main stage.

Our staff pick: Deontay Wilder to knock out Dominic Breazeale in the eighth round Wilder is the far superior boxer and the wakeup call last time out will have him focused and motivated. He is the easy pick on the moneyline and this bout is not going to make it to the tenth round. Take the “under” on the rounds total as Wilder’s punchout power will show up once again in this one.

Check out the latest boxing and fight odds – click here.