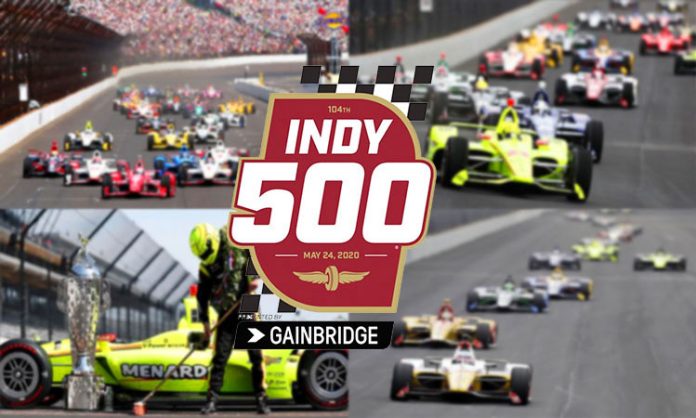 Overall a three-month delay for the Indianapolis 500 is better than no race at all.  The normal Memorial Day tradition of the Indianapolis 500 was lost for this year.  COVID-19 has been created all kinds of new normals and this is one of them.  For several months there was considerable doubt about “The Greatest Spectacle in Racing” being run at all this year.  But by patience and meticulous planning the Indy 500 goes off on Sunday with coverage on NBC.  Of course, in keeping with the “new normal” there will be no fans at the event.  But that really isn’t going to matter to the competitors.  If there is one race in a career to win the Indianapolis 500 is that race.  For Sunday all of the best drivers will be on hand to chase the dream of a lifetime.  And there are several strong Indy 500 handicapping choices to consider.  Whoever wins on Sunday will go down as the most unique champion ever in the glorious history of the Indianapolis 500-mile race!

.@MarcoAndretti WINS the pole position for next Sunday’s #Indy500!

Tune in next week on @NBC at 1PM ET! pic.twitter.com/AVheWORXb6

The top and obvious public betting choice is five-time IndyCar Series champion Scott Dixon.  He has been in first place in the standings from the very start of the 2020 season.  So far this year Dixon has three wins in six starts with five top ten finishes.  He won his only Indy 500 championship in 2008.  Other than that Dixon has had mixed results at Indy.  Overall, he has 17 career starts with one win and 11 top ten finishes.  Dixon has an average finish at Indianapolis of 10.8.

Second place in the IndyCar standings is Simon Pagenaud.  For his career he has one series championship and one Indy 500 win, which was last year.  In like manner to Dixon has Pagenaud had his ups and downs at Indianapolis.  To show, Pagenaud has eight starts with one win and four top ten finishes in the Indy 500.  His average finish is 10.8.  So far for 2020 he has just one win on the season.

Joseph Newgarden is in third place for the IndyCar standings with a single win.  He does boast a total of two series championships.  Newgarden has never won the Indy 500.  At the Indianapolis Motor Speedway, he has struggled to get consistent results.  As an example, he has eight starts with four top ten finishes.

So far it has been a very tough season for winless but highly skilled Will Power.  He is fifth in the IndyCar standings for 2020.  Power has one series championship and an Indy 500 title for his career.  Specifically, at Indianapolis Motor Speedway Power has 12 starts with one win and seven top ten finishes.

As a winless driver for 2020, Alexander Rossi is 10th in the standings.  Of course, Rossi is known for winning the 2016 Indianapolis 500 as a rookie.  He was the first rookie to win the race since Juan Pablo Montoya in 2000.  Overall Rossi has four Indy 500 starts with a win and four top ten finishes.

Winning the pole for the Indy 500 is Marco Andretti.  But the rock in the shoe is that Andretti is winless and 21st in the standings.  Despite his pole position he remains a +5000-long shot with a skeptical betting public.  Andretti has 14 starts in the Indy 500 with no wins and eight top ten finishes.

In this situation Scott Dixon is in far and away the best form of all drivers.  Dixon likely should have won more than just one Indy 500 championship.  This would be the year to make up for that!